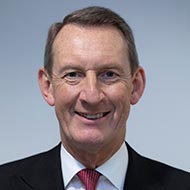 Ian Russell is a Chartered Accountant and has held a number of senior finance roles in a variety of commercial organisations during his executive career. He was an executive Director of Scottish Power PLC for 12 years, initially as Finance Director and then as Chief Executive.

Ian received a CBE in the 2006 New Year Honours List for services to young people and volunteering.

He is a Fellow of the Society of Antiquaries of Scotland.

He became a Trustee of National Museums Scotland in October 2018 and was appointed as Chairman in August 2020. This term of appointment runs until July 2024. He lives in Edinburgh.