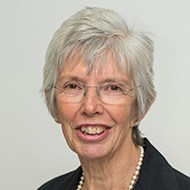 Janet Stevenson (Jandy) is a Chartered Accountant and for twelve years until December 2016, specialised in the audit of charities.

Jandy's interest in systems and controls and governance of charities developed as a result of a part-time secondment to the Office of the Scottish Charity Regulator when it was established, and by serving as a Trustee on a number of different charities and through her work as an auditor. She also served on the Governing Board of her professional practice and on the Council of the Institute of Chartered Accountants of Scotland. In 2014, she was appointed to the Court of Heriot-Watt University and now chairs its Audit & Risk Committee.

She is a Fellow of the Society of Antiquaries of Scotland.

Jandy became a Trustee of National Museums Scotland in April 2017 and her second term of appointment runs until March 2025. She lives in Edinburgh.