You are here Home > Collections and research > Our research > Past projects > Democratising knowledge: Chambers's Encyclopaedia
Discover how the Scottish publishing firm of W. & R. Chambers pioneered the use of images in encyclopaedias and dictionaries, embedded within the body of the text. This formed part of their strategy to make the first two editions of Chambers’s Encyclopaedia: A Dictionary of Universal Knowledge for the People accessible to a wider audience.

There are over 20,000 wood engraving blocks (referred to within the company as 'wood-cuts') in the W. & R. Chambers Collection held at National Museums Scotland. Over 7,000 of these blocks were created to print the illustrations in Chambers’s Encyclopaedia. The first ten-volume edition was published between 1859 and 1868 in Edinburgh. The second edition, also in ten volumes, was co-published with the American firm J. B. Lippincott, and was simultaneously released in Edinburgh and Philadelphia between 1888 and 1892.

A selection of the wood engraving blocks from this collection are on display in the Discoveries gallery at the National Museum of Scotland.

Find out more about the Chambers collection and learn about the history of this local firm, whose name became synonymous with educational and reference works across the globe. 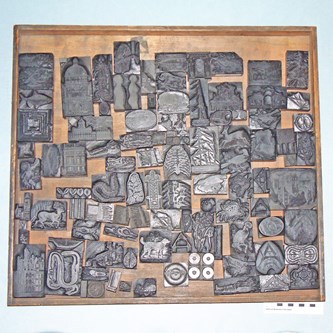 Discover more about W. & R. Chambers's ambition to democratise knowledge with the publication of a range of affordable reference and educational works, aimed at a mass readership.
More

Discover how the Scottish publishing firm of W. & R. Chambers pioneered the use of images in encyclopaedias and dictionaries, embedded within the body of the text.
More 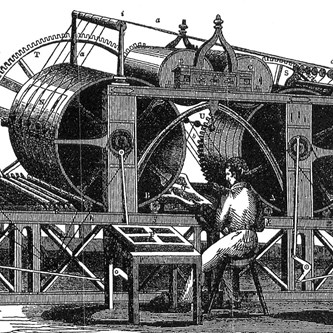 Explore how production workflows developed to publish Chambers’s Encyclopaedia varied between editions, and find out more about the growth and decline of the commercial wood engraving profession.
More

Further reading
Back to top