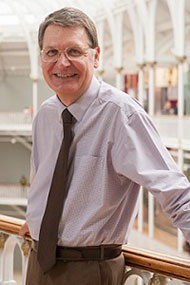 Godfrey Evans has an MA in Art History from the Courtauld Institute of Art, London, and a PhD in Art History from Edinburgh University. He is responsible for the collections of English and European silver, sculpture, ceramics and glass, enamels, and arms and armour from 1500 to 1850. Among the treasures in his section are the Lennoxlove toilet service, Napoleon tea service, and many other items from the outstanding collection of the Dukes of Hamilton, the premier peers of Scotland.

Godfrey is also working with Hungarian museums and galleries which have Hamilton items in their collections, as a result of the marriage of the daughter of the 11th Duke of Hamilton to Count Tassilo Festetics in 1880.

His published articles include:

Art and Design galleries
Back to top