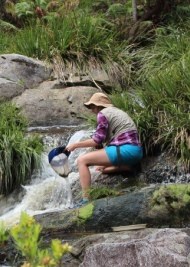 Dr Pereira da Conceicoa studied aquatic entomology at Rhodes University in South Africa. For her PhD she investigated the phylogenetics and historical biogeography of a group of mayflies endemic to South Africa. After receiving her PhD in 2016, she spent a year at the Albany Museum (South Africa) as a postdoc working with a research team examining the effects of seasonality on river biomonitoring in dangerous rivers of the Kruger National Park (South Africa). She then moved to London in 2017, to the Natural History Museum where she continued to focus on African freshwater insects and compare morphology based biological monitoring with potential DNA methods. Lyndall is currently the Pelham-Clinton Research Fellow at National Museums Scotland, continuing to work on aquatic invertebrates in Africa and the UK. She is also involved in red listing global mayflies, stoneflies and caddisflies, to determine which species are endangered and which are data deficient.

Her main interests include biodiversity and conservation, particularly of freshwater systems. It is estimated that we only know less than 30% of global biodiversity. The world is losing species (due to pollution, habitat loss and climate change) faster than we can discover and describe them. Her research is focussed on using DNA tools for rapid species discovery and to focus future taxonomic work. We need to know what species exist first before we can protect them.