Susan Chambers left school and worked at the Natural History Museum, London as an assistant in the Diptera (true flies) section for five years. After this she left to study zoology at London University (1974-1977) Royal Holloway College and became interested in primate behaviour. She was employed as a research assistant at Stirling University, Psychology Department in 1978 and worked in Senegal for six months looking at Baboon social behaviour.

On return to Edinburgh in 1979 she was employed at National Museums Scotland where she worked as a marine invertebrate curator. During this time she developed a special interest in Polychaetes, a group of marine worms. Originally working on scale worms and Nereids she now concentrates on Cirratulidae. Many polychaetes are benthic, i.e. they live in the mud and sand on the sea bed in all oceans of the world. This has led to some interesting field work on board research vessels in the North Atlantic and North Sea as well as coastal surveys around Scotland.

The research is specimen based, and requires careful preparation of specimens for descriptive work and looking down a microscope. There is remarkably little known about polychaete biology so much of the work is basic taxonomy involving new species descriptions and solving taxonomic problems of incorrect names.

Susan is also interested in promoting the wonders of the Scottish marine environment to a wider audience and is currently developing partnerships with others to promote this phenomenon. 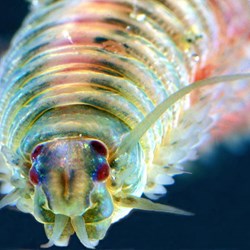 Out in the field with with our Principal Curator of Invertebrate Biology.
Read
Back to top