A recent paper looks at the wing shapes of a South African mayfly, known as the spiny-crawlers (Teloganodidae).

Wings across all insects have a single origin, making it one of the most important structures in insect evolution. The shape of wings varies considerably across insects, from dragonflies to butterflies to beetles and, in this case, to mayflies. Mayflies, along with dragonflies, are the oldest winged insects still alive today, with a lineage going back almost 300 million years.

Mayflies are scientifically known as Ephemeroptera, “ephemera” means short-lived and “ptera” means wings. They spend most of their lives underwater as nymphs before emerging into a short-lived, flying stage. They are the only insects to have two winged stages, a sub-adult that has water-repellent hairs (known as microtrichia) that it must shed in order to become a full, reproductive adult. This is quite a feat for the insect, as winged mayflies do not have mouths or digestive systems and rely only on energy reserves it has kept from its nymph stage for emerging, shedding, flying, mating and egg-laying. Mayflies mate while in the air (called nuptial flight), so saving these limited energy reserves is of utmost importance.

Researchers from National Museums Scotland, Albany Museum (South Africa) and University of Tarapacá studied the wing shapes of an endemic South African mayfly, known as the spiny-crawlers (Teloganodidae) for a paper recently published in Zoologischer Anzeiger. There are currently five species of spiny crawler in South Africa and researchers found that their size had a great effect on the shape of the wings. The largest spiny-backed crawler (genus Ephemerellina) needs a broader wing base and a raked wingtip to help with lift-off, energy-saving and higher range of flight speeds – possibly to avoid predators as it is more conspicuous than the smaller species. On the other hand, the smallest fringe-faced crawler (genus Lestagella) has broader wingtips for slower, more agile flight which is suitable for the species as it swarms, mates and then females “patrol” upstream to find a suitable place to lay eggs. 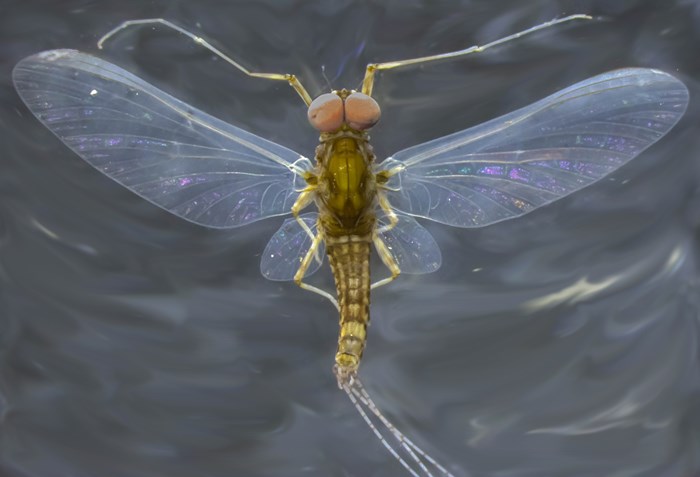 A male adult spiny-crawler, the large red eyes are used for mate searching, and the long forelegs are used to grasp onto the female during nuptial flight.

Although size is an important factor to consider in the wing shape of spiny-crawlers, it is not the only important factor according to results. It was also found that wing shape was species-specific, showing that wing shape is a strong driver in the evolution of these mayflies. This study raises the question of what these other factors are and highlights the need for further ecological and life history studies.

The first two figures (a and b) show the sub-adult wings with water-repellent hairs or microtrichia, which can be seen as a fringe on the bottom edge of the wing. Figures c and d show examples of a small spiny crawler species (c) wing shape, with a broader wing tip, and a larger species (d) with a narrower wingtip.