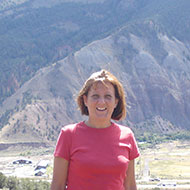 Vicen Carrió studied Biology at the University of Valencia, Spain, before moving to Edinburgh in 1992. Having first worked with Professor Euan Clarkson, University of Edinburgh, in Silurian gastropod fossils she gained funding to study the conservation of fossils, minerals and rocks. Since 1997 she has developed her career in geological conservation and has undertaken research in different areas of the collection, presenting numerous talks at conferences and seminars nationally and internationally. These conferences have helped her to develop new techniques in conservation and to keep up to date with new products and technology as they are developed. She now has an international reputation as a geological conservator, being invited as key speaker to international conferences in her field.

Vicen gained the designation Accredited Conservator-Restorer (ACR) in 2015, awarded by the Institute of Conservation (ICON) for demonstrating a high level of proficiency in conservation practice. In addition, she became an ICON PACR Assessor in 2019.

Her role involves the preparation and conservation of specimens for inclusion in our galleries, temporary or permanent exhibitions, and for research. She is experienced in a variety of physical and chemical techniques including cutting and polishing, making acetate peels, thin sectioning, moulding and casting, acid preparation, field techniques, and preventative conservation.