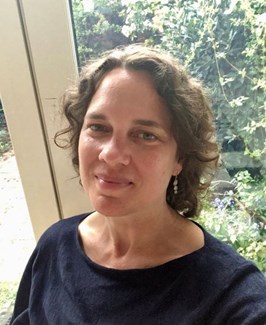 Rebekah joined the department in August 2020. She is a historian of science who has published widely on British science from the seventeenth to the nineteenth centuries. She is interested in the representation of science in images, museums and literature; in the relationships between science, institutions and wider society; and in the makers, users and ‘lives’ of scientific instruments.

After undertaking a PhD at Imperial College London, on nineteenth-century biographies and biographers of Isaac Newton, Rebekah was an ESRC-funded postdoctoral research associate at the University of Edinburgh’s Institute of Geography. There she researched the histories and geographies of the peripatetic British Association for the Advancement of Science 1831-1931.

From 2008 to 2013, Rebekah was Curator of History of Science at the National Maritime Museum, with responsibility for the history and heritage of the Royal Observatory, Greenwich, and the museum’s astronomy collections. There she worked on displays about the transit of Venus and history of solar observation and the large temporary exhibitions Royal River (2012) and Ships, Clocks and Stars (2014). Since then, and before joining NMS, Rebekah was a Senior Lecturer at the University of Kent, where she supervised PhD students and taught modules at undergraduate and postgraduate level on history of science; science, technology and empire; science and religion; science and satire; science communication; and science, museums and material culture.

In 2010-2015 Rebekah was a Co-Investigator on an AHRC-funded project on the British Board of Longitude, 1714-1828. This research supported the international exhibition, Ships, Clocks and Stars as well as public events and publications aimed at academic and general audiences. While at Kent, from 2017-2020, Rebekah was Principal Investigator on a Leverhulme Trust-funded project, Metropolitan Science: Places, Objects and Cultures of Practice and Knowledge in London, 1600-1800, in partnership with the Science Museum. In 2021-2023 she will be Co-Investigator on Tools of Knowledge, a digital humanities project funded by the AHRC that will explore and represent the history of the scientific instrument making trade in Britain and Ireland, 1550-1914.