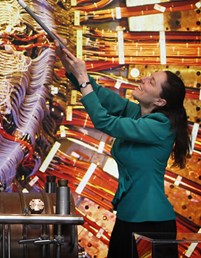 Tacye Phillipson is Senior Curator of Science and is responsible for the Museum’s science collections, with particular expertise in the physical sciences and 20th and 21st century material. She is also interested in safely maintaining collections containing hazardous materials and is one of the museum’s Radiation Protection Supervisors.

Tacye studied Natural Sciences at Trinity College, Cambridge and gained her Ph.D. in experimental physics at the Cavendish Laboratory with a thesis on Spatial and temporal studies of embedded triboluminescent crystals.

She was part of team which secured £1.3 Million grant from Wellcome to enhance current and historical biomedical content at the Museum with the galleries which opened in 2016. She took the lead in developing content for the permanent Enquire gallery which looks at how scientists have sought to answer questions, and the many different aspects of science.

Tacye has also been the curator of exhibitions including Power of Ten: Inventing Logarithms, John Napier of Merchiston and calculating devices, 2014; Hunting the Higgs boson, contemporary particle physics, 2013-2014; Reconstructing Lives, contemporary and historic prosthetic limbs at National War Museum of Scotland, 2012-2013; Sir James Black, recent pharmacy and biography, 2009-2010; and she was on the curatorial team for Earth in Space, contemporary and historical astronomical aspects of the gallery, 2011-  and Shaping our World, historical science and technology: drugs, prosthetics, radiation and optics within this gallery, 2011-2015.

Communications, transport, industry, engineering, energy and medicine: how have scientific and technological inventions changed our lives?
More
Back to top