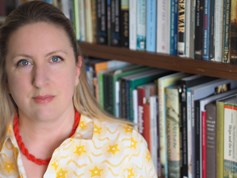 Dr Meredith Greiling is Senior Curator of Transport at National Museums Scotland with responsibility for all land, sea and air transportation in the collections, and has a particular interest in Scottish maritime history.

A former curator of Historic Photographs and Ship Plans at the National Maritime Museum, Greenwich, and Curator of Maritime History at Aberdeen Maritime Museum, Meredith was also responsible for curating the new Windermere Jetty Museum of Boats, Steam and Stories in the English Lake District. As well as working in museums Meredith previously worked as project administrator on the first British offshore wind farm at North Hoyle, Wales.

Meredith has completed doctoral research on the history of ship models in Scottish churches at the University of Hull as part of a Maritime Sculpture scholarship.

Communications, transport, industry, engineering, energy and medicine: how have scientific and technological inventions changed our lives?
More
Back to top