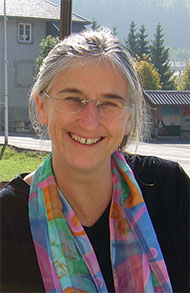 Dr Alison Sheridan, Principal Curator, heads the Early Prehistory section of the Scottish History and Archaeology Department and specialises in the Neolithic and Bronze Age of Britain and Ireland. She is also currently President of the Prehistoric Society; was a co-chair of the ScARF (Scottish Archaeological Research Framework) Neolithic Panel; is an Honorary Research Fellow in the University of Edinburgh School of History, Classics and Archaeology; is Museum Mentor for Bute Museum; and is Co-ordinator for Britain, Ireland, the Isle of Man and the Channel Islands in the international research project, Projet JADE2.

Dr Sheridan studied Archaeology and Anthropology at the University of Cambridge, where she also received her PhD, on ceramic production, exchange and social organisation in Neolithic Ireland, in 1985. She has been an archaeological curator in National Museums Scotland, in various capacities, since 1987.

She was part of the curatorial team that created the Early People gallery in the National Museum of Scotland; was lead curator of the Millennium exhibition, Heaven and Hell – and Other Worlds of the Dead; and is co-curator of Amazing Amber (May – September 2013).

Her research interests span the Neolithic and Bronze Age and extend beyond Britain and Ireland into Continental Europe. She has investigated the Neolithisation of Britain and Ireland, and subsequent developments in that archipelago, specialising in the study of Neolithic pottery, jewellery of jet and amber, stone axeheads, and interactions between different areas. She has co-edited and contributed to an influential book on the Chalcolithic of Britain and has researched Chalcolithic and Bronze Age jewellery and dress accessories, especially those of jet and jet-like materials, faience and amber, as well as studying the pottery used during those periods. She has been responsible for the National Museums Scotland archaeological programmes of radiocarbon dating since the 1990s, and also curates the National Museums Scotland collection of archaeological human remains from Britain.

Committed to the dissemination of the results of her research, she has published widely, lectured in Europe and the USA, and appeared on numerous television and radio programmes. The apogee of her televisual career has been as ‘TV Expert of the Week’ on Harry Hill’s TV Burp in February 2011, explaining to Neil Oliver how we know that there were toilets in the Late Neolithic settlement at Skara Brae.

Her full list of publications can be accessed here. Highlights are as follows:

Tracing the Lines: Uncovering Grooved Ware trajectories in Neolithic Scotland
Back to top