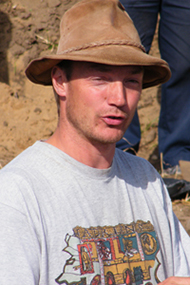 Fraser Hunter is principal curator of Iron Age and Roman collections. His undergraduate degree and PhD are both from Bradford University, and he has worked at the National Museum since 1991.

A key strand has been excavation work, both his own and using the results of others through the department’s post-excavation service. A vital element has been following up Treasure Trove discoveries in the field to provide a context for “stray finds”, as at Birnie (Moray) following a scatter of Roman coins, and at Blair Drummond, the findspot of an Iron Age gold torc hoard.

Celtic art: Fraser’s main focus in this area has been the Deskford carnyx, an Iron Age animal-headed trumpet which is one of the key pieces of Celtic art in NMS collections. He also studies the production, use and deposition of Celtic art in Scotland, and is developing an exhibition on “the Celts” in collaboration with colleagues at NMS and the British Museum. A key focus at the moment is understanding the Blair Drummond hoard of gold torcs, discovered in 2009.

Impact of Rome. Fraser has led a series of excavations to understand the impact of Rome on the local population, notably on the major hillfort of Traprain Law (with colleagues from Bradford University and CFA Archaeology) and on the Iron Age settlements of Birnie and Clarkly Hill (Moray). The work in Moray has revealed two of the area’s power centres, with contacts to Rome seen in a wide range of material, including silver coin hoards.

He also develops new approaches to existing finds, in order to get more information from them. Currently, he is managing the re-examination of the hoard of late Roman silver from Traprain Law by an international team of experts. He is also collaborating on a catalogue of Roman finds from non-Roman sites in Scotland as part of an international research project.

Iron Age material culture. Fraser researches a wide range of Iron Age and Roman finds with  a focus on the use of jet and related materials, an understudied area. Post-excavation work on new discoveries serves to push forward best practice and create a better understanding of their interpretation. This leads to reconsideration of many aspects of later prehistoric material culture, and ensures finds in National Museums Scotland's collections are constantly re-examined in the light of new data.

Explore archaeology with our Principal Curator of Roman, Iron Age and Early History.
Read
Back to top