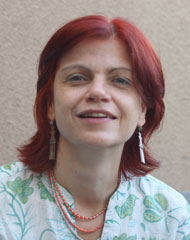 From 2017-2021 Dr Henrietta Lidchi is seconded as the Principal Investigator on the AHRC funded project Baggage and Belonging: Military Collections and the British Empire (1750-1900) (Standard Research Grant Ref: AH/P006752/1). This research project considers the material legacies of colonial military campaigns held in regimental and museums and places these in an interdisciplinary research framework. The project focuses on the practices, culture and significance of British military collecting of artefacts from Africa and India from 1750 to1900.

Henrietta Lidchi is currently Chief Curator at the National Museum of World Cultures (Nationaal Museum van Wereldculturen) in the Netherlands. From 2005 to 2017, she was Keeper of the Department of World Cultures, National Museums Scotland.  Prior to this (1994-2002) she worked at the British Museum and the Department for Culture, Media and Sport (2002-2005). Lidchi earned her degree at Durham University and her PhD at the Open University.

Henrietta is an Honorary Professor of the School of Political and Social Sciences, University of Edinburgh, an International Advisory Board Member, Centre for Anthropological Research on Museums and Heritage, Humboldt University, Berlin and former Vice President of the Native American Art Studies Association (2016-2020). Between 2019-2020, Lidchi served on the Dutch national advice committee whose report Colonial Collections and a Recognition of Injustice (Council for Culture, 2020) was commissioned to inform Dutch national policy on questions of restitution, repatriation and return. She is a named co-investigator for the research strand on military collections on the research grant Pressing Matters: Ownership, Value and the Question of Colonial Heritage in Museums, funded by the National Science Agenda of the Netherlands.