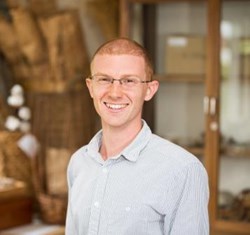 He is currently Meetings Secretary for the Prehistoric Society and was Chair of the Later Prehistoric Finds Group from 2018-2020.

His research is largely focused on Bronze Age material culture, predominantly metalwork and depositional practices. He is interested in how people engaged with their materials in the past, particularly the treatment of objects before and during deposition. He has explored this in his research through the themes of memory, identity, and object biography, as well as undertaking experimental activities to better understand prehistoric processes.

His current focuses include:

Matthew completed his BSc and MA at the University of Exeter between 2009 and 2014, during which he explored links between Bronze Age metalworking evidence, settlement activities and the landscape setting of metalwork hoards in Devon and Cornwall, as well as the phenomenon of older Bronze Age objects found in later Bronze Age hoards and settlements across southern Britain. This latter research has recently expanded to incorporate heirlooms and other ‘out-of-time’ objects from across Britain and Europe and throughout prehistory, resulting in an edited volume published in 2019: Objects of the Past in the Past.

In 2018, he submitted his PhD thesis to the University of Exeter: The Intentional Destruction and Deposition of Bronze Age Metalwork in South West England. This research involved an experimental programme analysing the deliberate destruction of swords, spears and axeheads to better understand what skills and equipment were necessary to undertake this practice. This allowed Matthew to reconsider and reinterpret a range of artefacts from a practice-based perspective, to better understand why objects were treated in this way. A monograph on this topic is currently in preparation.

From 2018, Matthew has been involved in the international collaborative project led by National Museums Scotland and Amgueddfa Cymru-National Museums Wales: Gold in Britain's auriferous regions, 2450-800 BC, contributing to the corpus of Chalcolithic and Bronze Age gold artefacts and regularly posting on key finds from the region.

He is currently working to publish historic discoveries of hoards in Scotland, including the Poolewe hoard and the Duddingston Loch assemblage.

Matthew is keen to make his work publicly available and disseminates regularly through blog posts and on Twitter (@mgknight24), as well as speaking at local and international conferences.

Knight, M.G. 2014. “Masters of Mysteries or Haphazard Handymen? An assessment of the evidence for metalworkers at Bronze Age settlements in Cornwall and Devon, south-western England.” Trowel XV: 29-41.

9. Knight, M.G. 2014. “Masters of Mysteries or Haphazard Handymen? An assessment of the evidence for metalworkers at Bronze Age settlements in Cornwall and Devon, south-western England.” Trowel XV: 29-41.