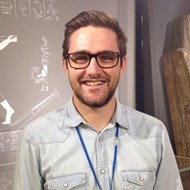 Daniel Potter received his BA and MA in Oriental Studies (Egyptology) from the University of Liverpool, before going on to complete his PhD at the same institution.

His PhD research focused on the Ramesside language used to describe divine interaction, this study was informed by the close analysis of textual sources and the use of methods from the areas of pragmatics and cognitive linguistics. Daniel’s other research interests include early Egyptology, John Garstang’s production of archaeological facsimiles and the representation of ancient Egypt in comics.

Daniel worked for two years as a Curatorial Assistant at the Garstang Museum of Archaeology, Liverpool. In this role he worked within a small team to design and develop new museum galleries, displaying artefacts from Egypt, Sudan, Italy, Greece, the UK and South America. Whilst in this post he was able to redisplay an Ancient Egyptian mummy for the first time in over 70 years, having previously been evacuated from the museum during the 1941 blitz.

Daniel has taught a number of courses within the Centre for Lifelong Learning, University of Liverpool centered on Ancient Egyptian History and Beginner’s Hieroglyphs and has also lectured on a number of topics including: Ancient Egyptian Religion, the History of Archaeology and Roman material culture.

In 2016 he joined National Museums Scotland as an Assistant Curator for the National Lottery Heritage Funded capital project ‘Revealing Cultures’. In this role he worked to develop the ‘Ancient Egypt Rediscovered’ gallery which opened in 2019. During this time, Daniel also curated the National Museums Scotland touring exhibition ‘Discovering Ancient Egypt’, highlighting Scotland’s involvement in the development of Egyptology. As part of this project he has also been involved in the development of learning resources and several films highlighting museum collections across Scotland. The touring exhibition forms part of the Ancient Egypt and East Asia National Programme. Daniel has developed and delivered training sessions for museum professionals and is currently conducting a Collections Review of ancient Egyptian material in Scotland.