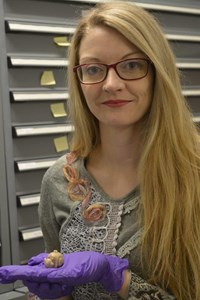 Louise Boyd gained an MA (hons) in History of Art from the University of Glasgow and a Masters in History of Japanese Art from the School of Oriental and African Studies, University of London. In 2012-13, she spent 6 months at The Japan Foundation Japanese-Language Institute in Kansai as part of the Japanese-Language Program for Specialists in Cultural and Academic Fields. She completed her doctorate at the University of Glasgow in 2016, with a thesis entitled ‘Art, Sex, and Institutions: Defining, Collecting, and Displaying Shunga’, which examined the history and reception of shunga (sexually explicit Japanese art) with a particular focus on how it was engaged with by public institutions, private collectors and modern visitors.

For the Festival of Museums in 2012, she curated an exhibition showcasing Japanese objects in Dumfries Museum’s collection and exploring the links between Japan and South West Scotland. An online version of the exhibition can be viewed on the Future Museum website. She has also worked at the British Museum digitising Japanese books with Ritsumeikan University, and at the Hunterian Art Gallery, University of Glasgow, as the Johnstone Curatorial Assistant.

She joined National Museums Scotland in 2017, as the Japan Foundation Assistant Curator, to assist with the new East Asia gallery and the review of East Asian collections across Scotland. In 2019, Louise was appointed as Curator for Japan. Her recent work includes Japanese Contemporary Design, an exhibition highlighting objects from our contemporary Japanese collection, which has been postponed until 2022 due to current circumstances. She is currently carrying out research on ehon, Japanese woodblock-printed illustrated books, as part of her Art Fund New Collecting Award project.

Louise’s main interest is Edo-period art and culture especially ukiyo-e and Kitagawa Utamaro, but other interests include the work of female artists, the history of collecting and collections, and issues relating to gender and sexuality.

1) “Women in shunga: questions of objectification and equality” in “Philosophy and Aesthetics of Sexuality in Japan”, Polish Journal of Aesthetics, issue 55 , 2019

4) “Multiplicity of Modern Japanese Masters” in Print Quarterly: The Scholarly Journal on Prints, vol.35, no.3, 2018