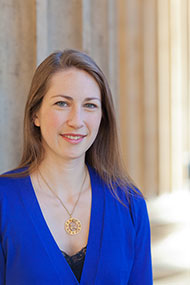 Margaret Maitland received her Hon. B.A in Ancient Near Eastern Studies from the University of Toronto and her M.Phil. and a D.Phil. in Egyptology from the University of Oxford with her thesis ‘Representations of social identity and hierarchy in the elite culture of Middle Kingdom Egypt’. She was lead curator for the Ancient Egypt Rediscovered gallery that opened at the National Museum of Scotland in February 2019. She held an Art Fund Headley Fellowship in 2019 for her research on pioneering Scottish archaeologist Alexander Henry Rhind and his contributions to Egyptology and is currently preparing this for publication. Her 2017 exhibition The Tomb: Ancient Egyptian Burial was the National Museum of Scotland’s most visited exhibition to date. It explored the story of a Theban tomb that was reused for over 1000 years, sealed intact with the burials of a Roman-era family, and rediscovered in 1857 as part of the first systematic excavation of an Egyptian tomb by Alexander Henry Rhind. Maitland leads the Scottish Egyptology Collections Network and she was a trustee of the Egypt Exploration Society from 2013-2018.

Maitland initially worked as a trainee Egyptology curator in the Department of Ancient Egypt and Sudan at the British Museum as part of their Future Curators programme, where she helped curate the UK touring exhibition ‘Pharaoh: King of Egypt’. She also worked with the Egyptian collection at the Great North Museum: Hancock in Newcastle-upon-Tyne and helped curate their exhibition ‘Catastrophe! The Looting and Destruction of Iraq’s Past’.

Maitland has carried out fieldwork in the Middle Kingdom tomb-chapels of Middle Egypt, and participated in excavations at the Ramesside town and temple site of Kom Firin in Egypt with the British Museum, the Tell Madaba Archaelogical Project in Jordan with the University of Toronto, and at Tell el-Masha’la, a late predynastic-early Dynastic settlement and cemetery in the Eastern Delta in Egypt. She has also led archaeological tours in Egypt and Sudan. Maitland is @eloquentpeasant on Twitter and writes an Egyptology blog, 'The Eloquent Peasant'; her blogging of the looting of antiquities that took place during the Egyptian Revolution was reported worldwide in 2011.

In 2012, she was appointed Curator of the Ancient Mediterranean at National Museums Scotland, and Senior Curator in 2016, where she curates the Ancient Mediterranean collections, including archaeology from ancient Egypt, Sudan, the Near East, Cyprus, Persia, Greece, and Rome, with an emphasis on the ancient Egyptian collections. With Lore Troalen, she was part of the Museum’s collaborative CNRS-funded research project PICS 5995, entitled the ‘Analytical study of Bronze Age Egyptian gold jewellery’ from 2012-2014. With Dr Dan Potter, she also helped curate the 2019 National Museums Scotland touring exhibition Discovering Ancient Egypt, which explores Scottish contributions to Egyptology.

Her main research interests include Middle Kingdom literature and art, particularly tomb-chapel decoration and tomb models, representations of social identity and hierarchy, the early history of Egyptology and Egyptian archaeology, and the analysis of ancient Egyptian pigments, dyes, and gold-working techniques.

Explore Ancient Egypt with our Curator of the Ancient Mediterranean Margaret Maitland.
Read
Back to top