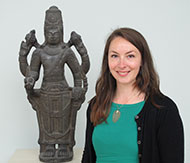 Rosanna Nicolson received an MA (hons) in Social Anthropology from the University of St Andrews and an MSc in Material Anthropology and Museum Ethnography from the University of Oxford. After completing her studies, Rosanna was employed as a Researcher for The Penrose Collection and volunteered in several collections roles. Prior to joining National Museums Scotland, Rosanna was Cataloguing Assistant at the Pitt Rivers Museum and an Archives Assistant at the Bodleian Library.

Rosanna joined the Department of World Cultures in 2014, first as a Research Assistant on a short project ‘Material Encounters – Reassessing Military Collecting in North America and Tibet’ funded by the British Academy/Leverhulme. A blog post on this project can be found on the Museum Ethnographers Group Blog. Then as Assistant Curator, is developing an specialist interest in Southeast Asia.

Rosanna worked on the temporary exhibition Indian Encounters (November 2014 - March 2015). Rosanna was part of the team that delivered the final phase of the museums fifteen year master plan; the Art of Ceramics, and the refreshed Artistic Legacies and Inspired Nature galleries, which opened in February 2019.

Rosanna’s current research focuses on collecting histories from Borneo, particularly Sarawak. A blog post about one of these early 20th century collections can be found here. Rosanna is also currently an associate member of the Edinburgh Buddhist Studies, an interdisciplinary research network launched in 2019, and is working on identifying and improving documentation for Buddhist collections from mainland Southeast Asia.

Lidchi, H. with Nicolson, R. (2020) Seeing Tibet through soldiers' eyes: photograph albums in regimental museums, in Dividing the spoils: Perspectives on military collections and the British empire, Eds. by Henrietta Lidchi and Stuart Allan, Manchester UP 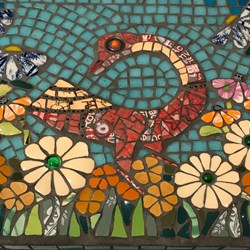 Explore our World Cultures collection with Assistant Curator Rosanna.
Read
Back to top