Origin and Evolution of Mammals: study of an exceptionally preserved skeleton from the Middle Jurassic of Skye, Scotland 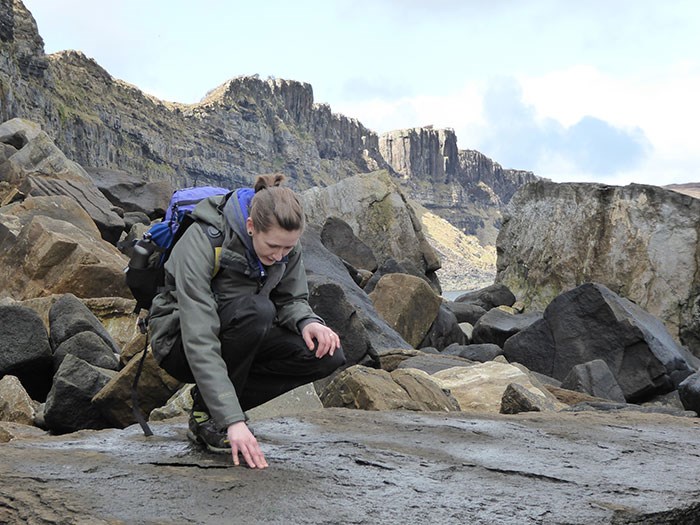 Above: Elsa is involved in ongoing fieldwork on the Isle of Skye.

There are still many mysteries surrounding the origins of mammals. They appeared at the same time as the dinosaurs, yet remained relatively small until the dinosaur extinction 65 million years ago. Despite their size, they were clearly very successful to have survived to flourish on earth today. Elsa’s PhD research aims to understand what made these early mammals so successful, and the role they played in an ecosystem dominated by dinosaurs. She is examining previously overlooked fossil mammals from the Isle of Skye.  Using micro CT-scanning, Elsa will reconstruct the fossils digitally in 3D, and use them to study the anatomy of these creatures. This will tell us how they lived, what they ate, and where they fit into the ecosystem of Jurassic Scotland.

The first Mesozoic mammals were identified from England in the 1800s. Since then, multiple fragmentary fossils have been uncovered in the UK and the rest of the world. Field work on the Isle of Skye in the 1970s recovered the first Scottish Mesozoic mammal in the Bathonian (Middle Jurassic) rocks of the Kilmaluag Formation. Named Borealestes serendipitus, the original fossil material comprised one partial jawbone with six teeth. Alongside this were teeth from a tritylodont called Stereognathus hebridicus, a mammal-like reptile very closely related to early mammals. 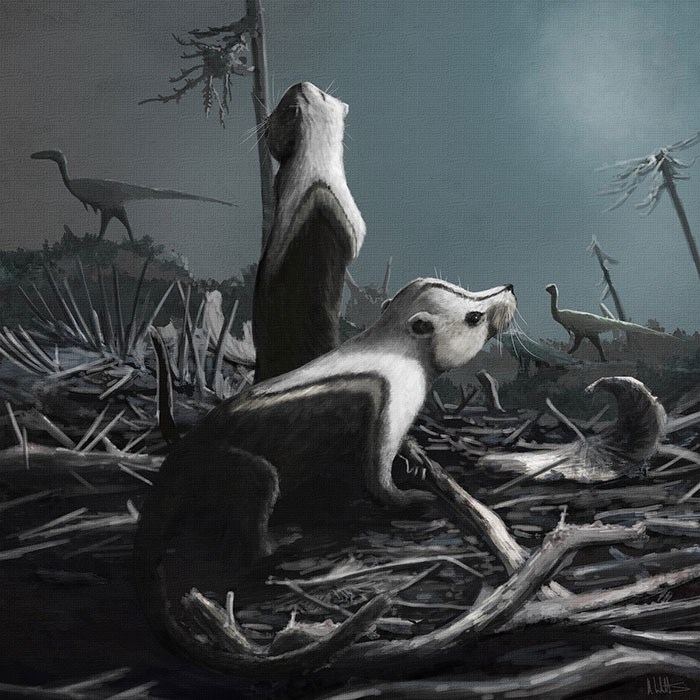 Since this initial discovery an almost complete mammal fossil and multiple fragmentary fossils of early mammals have been discovered on Skye by various research groups, but almost none have been formally described. These Scottish specimens are among the best preserved Middle Jurassic mammals outside China – the latter having only recently yielded contemporaneous material. This makes the completeness of the fossils Elsa is researching crucial for understanding taxonomy, locomotion and ecology in our ancient ancestors. It also puts Scotland on the map as an internationally important locality for Middle Jurassic fossil mammals. 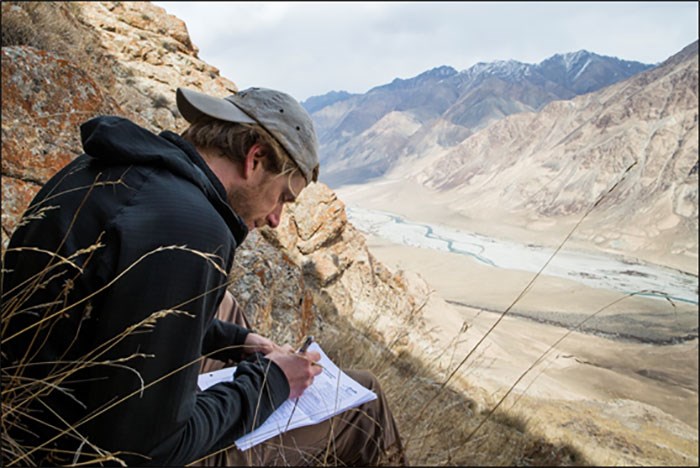 It is well known that big cats such as lions and tigers now occupy small fragments of their former ranges. However, much less is known about the extent and permanence of these historic ranges through longer, evolutionary timescales. David’s PhD research aims to identify the changing ranges of big cats through the Late Pleistocene, whilst analysing morphological variance in lions and tigers in the context of these patterns.

Increasingly our understanding of the history of organisms is shaped through molecular studies of modern individuals. Recent genetic work on both lions and tigers has challenged the classification of traditional subspecies, by proposing only two subspecies of both tigers and lions. This raises questions surrounding the driving geographical forces of recent evolutionary processes, and of the resulting morphological variation within each species.

Understanding the shifting ranges of big cats through the turbulent climatic conditions of the Late Pleistocene and Holocene allows for a better appreciation of the geographic variation we see today. Using species distribution models with palaeo-climate data, David is modelling the likely ranges of big cats through the glacial and interglacial conditions lions and tigers have endured within the last hundred thousand years. Additionally, by exploring the current morphological variation found in big cats, we gain insight into how lion and tiger populations may have evolved. Skull measurements, collected from museums across Europe including National Museums Scotland, have been integral in creating a global dataset on big cat skulls, from which David is exploring the morphological variation in big cats across their respective ranges. 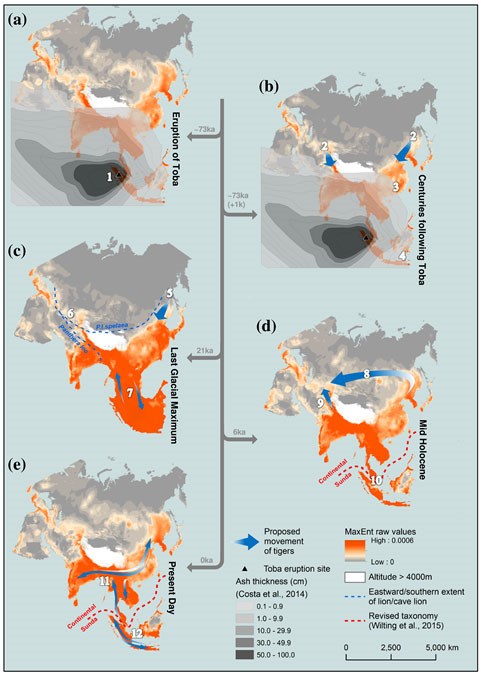 Above: Proposed range shifts of the tiger since the ~73 ka eruption of Toba (1). Immediate impacts (1), and millennial scale cooling, likely reduced the northern range (2), leading to a probable refugium (3), associated with the genetic bottleneck of the tiger. Suitable (but fragmented) habitats (4) were unlikely to have harboured the tiger during this time due to a single source of molecular variation. The northern range of the tiger would have been suppressed by unfavourable conditions at the LGM (5), and Caspian/western Indian marginal habitat may have been impacted by the distribution of the lion (6). LGM conditions likely allowed the free movement of the tiger between the Sunda Islands and the continent (7). Post-LGM conditions saw the retreat of the lion range, which, along with more favourable habitat suitability, would have allowed the colonization of the Caspian region via a northern corridor (8), southern corridor (9) or concurrent corridors (8 + 9). Tigers would have been separated by rising sea levels following the LGM through the Strait of Malacca (10), leaving a contiguous population of Continental tigers (11), and Sunda tigers which were likely able to disperse between islands until modern times (12). From Cooper et al., (2016): http://onlinelibrary.wiley.com/doi/10.1111/ddi.12484/full. 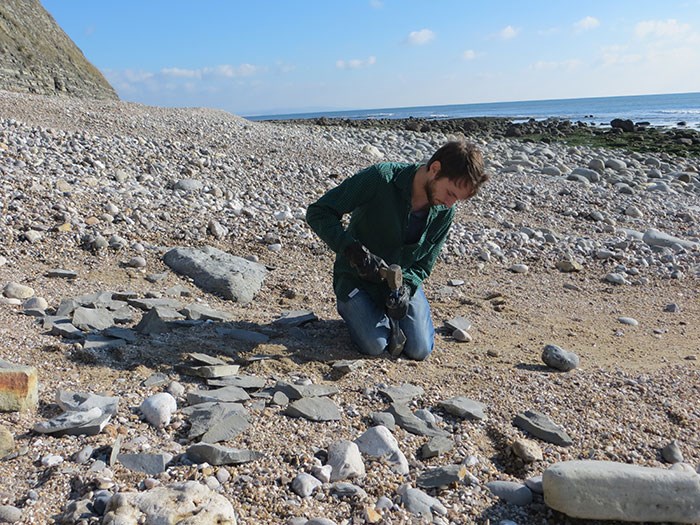 The end Triassic mass extinction (eTme) was a time of extreme biotic turnover related to high levels of perturbation to the Earth system caused by massive volcanic eruptions of the Central Atlantic Magmatic Province. All major groups of marine and terrestrial plants and animals were affected with estimates of more than 50% loss of genera. Previous studies of insect occurrence however have found little evidence of a major insect extinction at the Triassic-Jurassic boundary. The main aim of this project is to document insect survival across the end Triassic mass extinction to better understand its effects on insects.

Relevantly aged entomofaunas exist from several regions globally with the largest collections from Russia, China and Europe. The UK has arguably the most useful collection for understanding the eTme with several thousand specimens distributed through relatively well understood stratigraphy around the Triassic-Jurassic boundary. Most of the UK material was collected in the mid-19th century by Rev. Peter Bellinger Brodie and has largely languished in various museum collections since with only a few attempts to revise parts of the collection. Additional material has been collected from the Lias rocks of the Dorset coast by James F. Jackson in the mid-20th century. and several more recent collectors, and from the Toarcian rocks of Strawberry Bank in Somerset by Charles Moore (collected in the 19th century).

For the purpose of this study and for the benefit of future researchers, this material will be stratigraphically and taxonomically revised to current standards before analysing for changes across the eTme. Global entomofaunas will also be explored but taxonomic revision of the whole fauna will not be possible within the time frame available.