You are here Home > Collections and research > Our research > Featured Research > Baggage and Belonging: Military Collections and the British Empire, 1750 – 1900 > Project updates > International Workshop
On 27-28 February 2020 the project team convened a two-day international workshop at the National Army Museum, London.

The workshop began with a keynote lecture by Edward Spiers who presented an overview of the evolution of British military customs and practices regarding the acquisition of spoils of war, focusing on the context of colonial campaigns in Africa. Henrietta Lidchi and Stuart Allan followed with an update on the project, including the completion of their edited volume Dividing the Spoils: Perspectives on Military Collections and the British Empire, soon to be published by Manchester University Press. Nicole Hartwell closed the first day’s proceedings with an overview of the themes and artefacts showcased in the project exhibition, ‘Legacies of Empire’ which will feature at the National War Museum, Edinburgh Castle from November 2020. 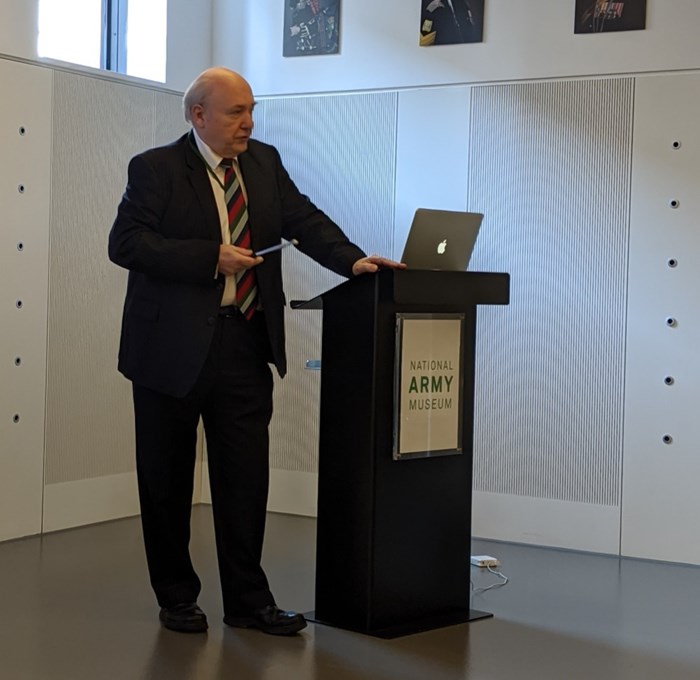 Edward Spiers presenting his keynote to the group

The second day of the workshop comprised three sessions, inviting scholars to reflect upon issues that moved beyond the scope of the project. The session ‘Military and Political Governance’ chaired by Alastair Massie began with an overview by David Whetham on the manner in which military ethics has been understood in the British military from the nineteenth century to the present day. Pauljac Verhoeven discussed looting practices of the Royal Netherlands East Indies Army, addressing the role of the colonial state in the relocation of theses artefacts to museums in the Netherlands and Indonesia in the nineteenth century. Staci-Marie Dehaney examined the role of the West India Regiment in nineteenth century military campaigns in Africa, and Emma Martin closed the session with her insights on the tosha-khana, or ‘Treasure House’, a process by which artefacts diplomatically-exchanged with the British were stripped of their historical and political meaning, and re-distributed from East and South Asia to collections in Europe. 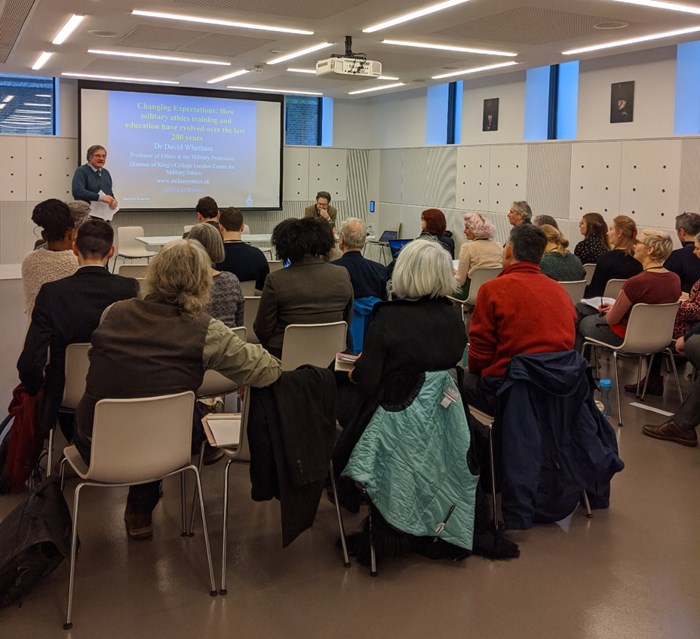 The session ‘Collecting’, chaired by Stuart Allan began with John McAleer and Daniel Simpson exploring the collecting motivations and activities of naval personnel, revealing insights into the logistics, transportation and use of storehouses for material artefacts taken abroad, and the challenges and practical issues raised. By focusing on the Aceh collections of the National Museum of World Cultures in the Netherlands Mirjam Shatanawi presented an investigation into how colonial campaigns in this region influenced the types of artefacts taken by the Dutch East Indies Army, and in turn, how this material shaped colonial perceptions of Aceh. Her paper discussed objects taken by the officer Theodorus Veltman (1868-1943), who fought with the marechaussee, the elite troops of the Dutch East Indies Army. In 1907 Veltman sold a collection of 753 objects to the Museum of Ethnology in Leiden. Zachary Kingdon’s paper closing this session addressed the context of Nigeria, examining artefacts associated with British colonial officials, and what they reveal about the relationship between the Benin Kingdom and the British in the lead-up to the conquest and looting of Benin in 1897. 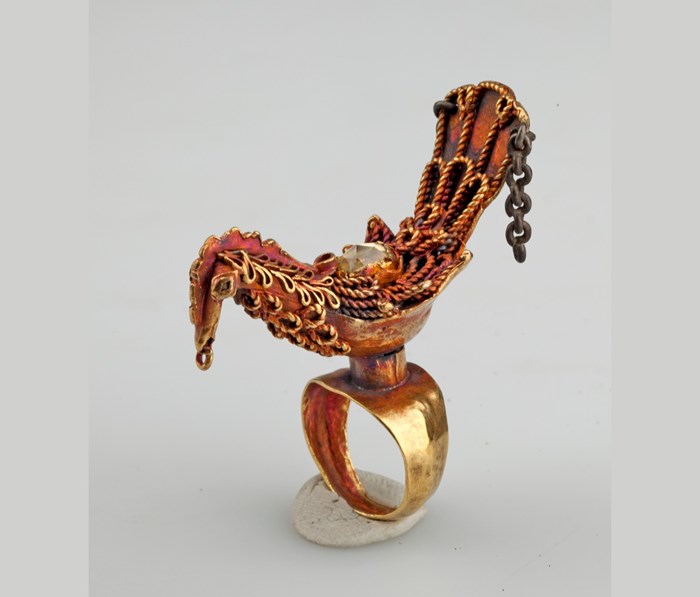 Finger ring with bird, made from gold and silver, Aceh, 19th century, discussed by Mirjam in her paper © Collection Nationaal Museum van Wereldculturen

The third session of the day, chaired by Henrietta Lidchi addressed contemporary issues, including present-day debates regarding reparation and repatriation. It began with a paper by Chris Wingfield on the role that the display of trophies can play in the humiliation of defeated enemies. Desha Osborne traced mythologies surrounding two artefacts – a sword and gorget of the Garifuna Chief Joseph Chatoyer, which have been central to the colonial history of St Vincent. Charlotte Joy discussed the issue of ‘heritage justice’, and the role that material culture can play to address past wrongs, and Jacques Schuhmacher closed this session by addressing the context of Nazi-looted art and the challenges this material raises for provenance researchers.

The workshop was fortunate in that unlike many other such events, it was able to go ahead, and to benefit from shared knowledge. The project team would like to sincerely thank all of the speakers, chairs, discussants and participants for their insights and expertise, as well as Kelsey Loveless at the National Army Museum, and Maggie Briggs for their assistance in arranging the practical aspects. The project concludes formally in November 2020, but members of the research team will be drawing on its findings in future publications.