Advisory Board Meeting at the National Museum of World Cultures, Leiden

You are here Home > Collections and research > Our research > Featured projects > Baggage and Belonging: Military Collections and the British Empire, 1750 – 1900 > Project updates > Advisory Board Meeting at the National Museum of World Cultures, Leiden
On 28 November 2018, colleagues from our Advisory Board met at the National Museum of World Cultures in Leiden to discuss how the project has progressed since our last meeting. This was also a unique opportunity to connect with scholars in the fields of anthropology and military history in the Netherlands, and to begin to draw parallels between British and Dutch colonial histories and colonial collecting.

Our day began with a tour led by Francine Brinkgreve, Curator of Insular South East Asia, of the museum’s recently opened exhibition ‘Bali – Welcome to Paradise’. Divided into themes, the exhibition galleries explored the era of Dutch colonialism, Hindu rituals and traditions, and presented displays of contemporary Balinese art that raised issues such as mass tourism and plastic waste.

One of the most striking objects on display associated with the Dutch military conquest of Bali was a pair of ornately carved wood doors over four metres long that were looted from the Royal Palace of Badung, Denpasar in 1906. The doors were taken in the aftermath of what is known as Puputan (or ‘Fight to the Death’) where the Raja and a silent procession faced the Dutch forces.  Many Indonesians – including the Raja of Badung – were killed by Dutch gunfire or by ritual suicide during the battle. The Dutch destroyed the palace and most of its treasures – including textiles, jewellery and ceremonial kris – were sent to the museum in Batavia, now the National Museum of Indonesia in Jakarta.

After a tour of the exhibition Pim Westerkamp, Curator of South East Asia, presented a talk that examined the language that Dutch colonisers used to describe indigenous peoples of Indonesia, which often sought to establish stark juxtapositions between the two cultures.

Annette Schmidt, Curator Africa, and Francois Janse van Rensburg, Junior Curator South Africa, focused their talk on a closer examination of African collections in the museum which originated from colonial conquest. Some of these objects – as in our own collection, and the collections of regimental museums across the United Kingdom –  also demonstrate the complexities of cross-cultural interactions during the colonial period.

An interesting example that we saw was a ceremonial stool of Denkyira origin that was given to the Dutch by the Asante. In the early 19th century, the Netherlands provided support to the Asante in their war against the Denkyira in order to safeguard Dutch trade in the region. In return for their support, they were presented with a number of gifts from the spoils of war, including this ceremonial stool. This object was one of a number of objects that were given to the Dutch governor – Major Friedrich Franz Ludwich Ulrich Last (1789-1833). In 1825 he sent these items to the Royal Cabinet of Rarities in The Hague. The ethnographic collections of the Royal Cabinet formed the basis for the Ethnographic Museum in Leiden (established 1837), the precursor to the National Museum of Ethnology (now the National Museum of World Cultures).

This talk was followed by a presentation from Pauljac Verhoeven, of Museum Bronbeek in Arnhem. The museum explores the history of the Royal Dutch East Indies Army (Koninklijk Nederlands-Indisch Leger, KNIL) and also functions as a veterans' home. The museum's permanent exhibitions examine how the Netherlands fought, expanded and lost its power in South East Asia. 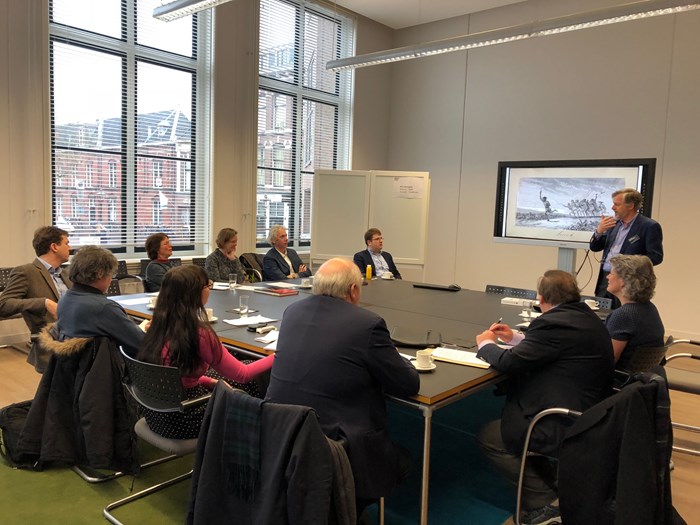 Above: Pim Westerkamp presenting ‘Wildness and Rationality: Resistance in colonial imaginations’ to the group.

Our day concluded with a group discussion and reflection on the various themes that were raised throughout the museum tour and presentations. We hope to continue to explore the international dimension to our project in an upcoming seminar hosted at the National Army Museum in February 2020.