You are here Home > Collections and research > Our research > Featured projects > Glenmorangie Research Project into Early Medieval Scotland > Bringing the past to life > Hand-bells
Brazing an iron hand-bell in bronze has been the most technologically challenging of all the craft recreations. Our experiments have reinforced our appreciation of the skill and knowledge of Early Medieval craftspeople, and we can now experience how they may have looked and sounded.

Hand-bells are associated with the earliest evidence for Christianity in Scotland and many have been curated as relics at churches. As bright new objects they were a sight to behold, but now they survive as heavily corroded rusty shadows of their former glory, silenced and unable to ring.

They were used to signal important moments, especially during ceremonies. The modern word for a time-keeping device, a clock, originates from medieval words for a bell (eg Irish clocc Welsh cloch).

Hand-bells were made from a wrought iron sheet folded and riveted together into a flaring quadrangular shape (like a cow-bell), and then covered inside and outside with bronze (brazed). Making bells in this way allowed Early Medieval craftspeople to make brighter, larger and louder bells efficiently. Bells are not made in this way anymore (modern bells are made only of cast bronze and are circular in shape) and as a result iron working and bronze working are now considered separate crafts with their own traditions.

Analysis of bells in the National Museum of Scotland’s collections using XRF (X-ray fluorescence analysis) told us that they were coated in bronze inside and outside. Further close-up examination of these preserved bells told us that the bronze had travelled between the folds of the iron sheet, meaning that the iron sheet acted as a skeleton around which the bronze flowed. This suggested that they were coated in bronze by either direct application or a lost-wax investment casting method. 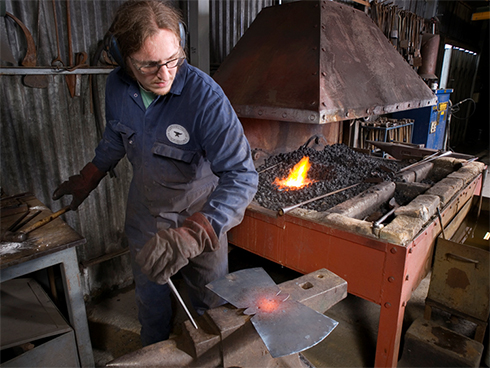 Above: Working the hot metal to create a new bell.

We have been experimenting with a variety of brazing and lost-wax casting processes to recreate a functioning bell based on the evidence. This required bringing the skills and experience of two groups of craftspeople together – experts in blacksmithing at Ratho Byres Forge and bronze casting at Powderhall Bronze. We have uncovered more than one technique of how these bells were made, and each time the complexity of bringing what are now considered to be separate technologies together to make one object became evident. An impressive quantity of time and resources were required - even by today’s standards. In particular, the lost-wax casting methods created a good seam which improved the bell’s resonance when rung. 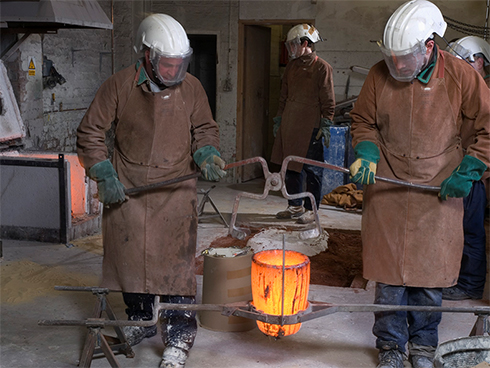 Above: Casting the bell.

This film shows one of the processes we developed for our recreation based on the best preserved brazed iron bell from Scotland, kindly loaned by Birnie Kirk for Creative Spirit. The music featured in the film is from ‘The Kilmartin Sessions: the Sounds of Ancient Scotland’ on sale at the Kilmartin Museum.