You are here Home > Collections and research > Our research > Featured projects > Glenmorangie Research Project into Early Medieval Scotland > Bringing the past to life > Hostage stone
Many slates with evidence of learning to read and write were uncovered during recent excavations at the Early Medieval island monastery at Inchmarnock, Bute. Instead of learning their rote, one student has left us an inscribed doodle on their slate.

‘The Hostage stone’ depicts a scene, either witnessed or imagined, that shows how portable reliquaries were carried and entrusted to guardians. Significant details certainly suggest that the student was familiar with these important objects. 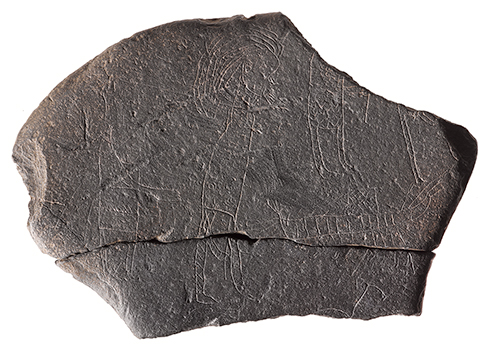 Wild-haired raiders dressed in long coats of mail are dragging a hunched figure by a rope, towards a ship. This prisoner may be a monk – they are carrying a church-shaped reliquary, held by a strap and attached to their belt by a chain for extra security. This valuable object is the same shape and relative size as the Monymusk reliquary.

Not only does this doodle tell us how reliquaries were used, but it hints at how parts of these objects ended up in Norse graves far away. The film below brings to vivid life the story of the scribbling student and the prisoners they drew. Animating ‘the Hostage stone’ provides a context of use for a digital model and recreation of what the Monymusk reliquary would have originally looked like.