Traditional craft techniques and modern skills can allow us to bring to life a type of object which has not been seen for over 1,000 years. We were inspired to create a throne based on depictions on Pictish sculptured stones - particularly the pair of thrones shown on a cross slab found in Fowlis Wester in Perthshire. No Early Medieval Scottish thrones have survived, probably because they were made of organic material.

The decision was taken to make the throne in wood and Adrian McCurdy, an experienced furniture maker based near Jedburgh (Scottish Borders), was selected to produce this commission. 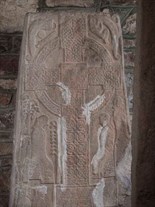 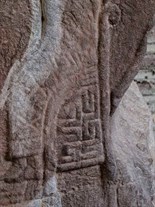 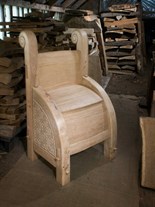 Above: The Fowlis Wester stone (left), a detail of one of the thrones on the stone (centre) and the finished Pictish throne (right).

Re-creating the thrones in 3D

On the Fowlis Wester stone the thrones are only shown from the side. Adrian’s skills as a furniture maker allowed him to interpret the visual clues in these images to produce a basic design. 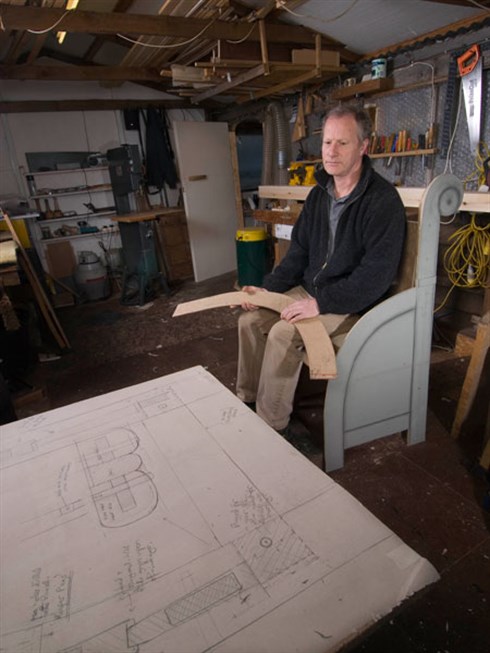 Above: We worked closely with master furniture maker Adrian McCurdy to develop the throne design. Drawings and models helped us to turn the two-dimensional picture of a throne on the Fowlis Wester sculpture into a three-dimensional design.

One of the most striking characteristics of the Fowlis Wester thrones are the curving front legs and arms, which seem to have been made as a single piece. For this design we needed naturally curved pieces of wood from tree boughs that had grown into the desired shape. This was very difficult to source, but luckily storms in the autumn of 2008 brought down an oak tree close to Adrian’s workshop that had a suitably curved bough. Since this wood was fresh - ‘green’- it was liable to split. To air-dry the wood traditionally would have taken around four years, so  instead the wood was chemically treated to speed up the drying process, although some cracking to the arms did occur using this method.

Making the seat and back of the throne

The seat and back of the throne were made from cleft oak boards. Cleaving wood is no longer a common skill, but its great advantage is that it produces strong wedge-shaped boards following the natural grain of the wood. A section of oak trunk is split using a group of wedges, either made from metal or wood. These wedges are knocked into the trunk on the line of a medullary ray. Each wedge is knocked in turn then replaced by successively larger wedges as the cleft opens up. The cleaver works their way around the trunk, splitting away wedge-shaped sections until the whole trunk has been split. No wood is wasted. A tool called an adze is then used to smooth the surface of the boards and reduce them to the required thickness. 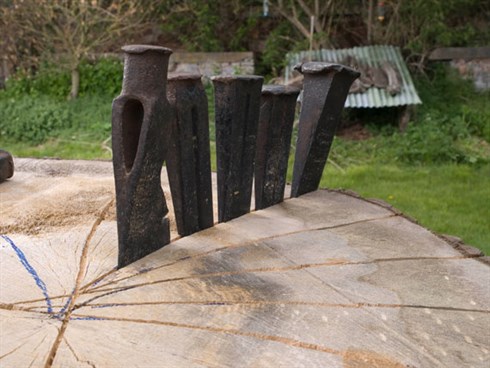 Above: The throne is made from oak. Wedges were used to begin splitting an oak trunk into sections. This is a traditional method of cleaving wood which efficiently produces strong sections that are unlikely to warp.

Setting the height of the throne

Adrian used a number of mock-ups to test the ideal seat height and the overall comfort of the throne. The Fowlis Wester thrones have high seats, and we wanted to reproduce this. This meant that the seat followed the top curve of the arm-leg pieces, and so  sloped gently forward. This explains the slightly odd perched position of the individuals on the Fowlis Wester thrones.

Above: Click on the thumbnails above to see the intial designs for the throne and to find out how the wood was split and shaped.

We felt it was important to use traditional jointing methods rather than modern alternatives such as glue. The joints used tenons, which were cut to fit into corresponding grooves. Once fitted these joints were secured with small tapered wooden wedges. This joining method meant that the throne could be de-assembled and re-assembled. Also, tapered wedges can be tapped in regularly as the wood continues to dry and shrink. This design consideration may indicate that these thrones were built to be portable (like modern-day flat-pack furniture) and maintained over time to be kept in use.

Above: Click on the thumbnails to see how the joints were fitted.

Decorating the sides of the throne

The sides of the Fowlis Wester thrones are decorated with a Pictish geometric key pattern, similar to that on the Rosemarkie stone on the Black Isle. We decided to interpret this design in wood, but it could also have been woven textile or basketry. The design was drawn onto the wooden panel and carved by hand using a mallet and chisel. 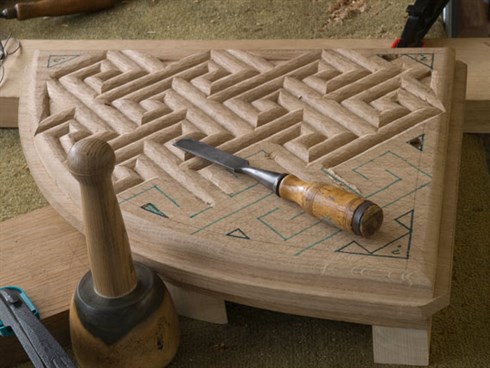 Above: This is one of the two side panels of the throne. The throne on Fowlis Wester stone is decorated with a type of design known as ‘key pattern’. We had to come up with our own key pattern design to fit the size and shape of our throne.

The thrones on the Fowlis Wester stone are shown with a separate block on which the sitter’s feet rest. This appears to be a solid block and is clearly separate from the rest of the throne. Adrian suggested a stone footblock as it would be more stable: stone can be carved flat, unlike carving wood with an adze following the uneven natural grain of the wood. We commissioned Barry Grove, stone sculptor, to recreate a sandstone footblock. 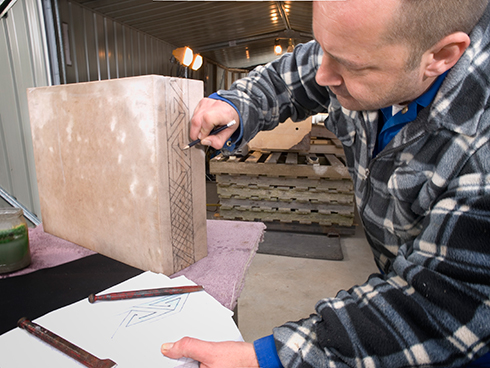 During the design process we realised how important the footblock was for supporting the body on the curved seat of the throne. While seated, the sitter is at eye-level with their audience. However, the use of a footblock means that once a person rises from being seated, they are standing higher than their audience. It is possible that these gestures of the body conformed by use of the sloped seat and footblock are linked to concepts of social position and power. Additionally, in order to be comfortable with a dignified pose it is essential to have a footblock of the correct height specific to the sitter. This raised the intriguing possibility that while the throne might have been used by more than one sitter, indicative of a lineage of powerful individuals, the footblock would probably have been bespoke; made for a particular individual and tailored to their height.