You are here Home > Collections and research > Our research > Featured Research > Glenmorangie Research Project into Early Medieval Scotland > Bringing the past to life > Traprain law dish
Buried around the middle of the 5th century AD, the hoard of Roman silver from Traprain Law in East Lothian is the largest known from outside the Roman Empire.

And amongst more than 250 pieces of hacked-up Roman silver from the hoard are two small pieces from one of the biggest silver dishes in the whole of the Roman world.

New research combined with laser scanning technology have allowed us to reconstruct for the first time quite how big this dish was and how sumptuously it was decorated.

The video below shows the digital reconstruction of the dish.

The massive silver platter measures 70cm in diameter and would have been used for carrying and serving choice foodstuffs to important members of society, no doubt at occasions of great splendour and display.

The silver dish is decorated with an engraved geometric and floral border divided by portrait busts. This decoration has then been embellished with niello – a black enamel-like inlay – and gilding. The reconstructed design is based on small areas of surviving decoration on the original silver fragments. None of the middle portion of this dish has survived and so the central engraved medallion is taken from a very similar dish found in Switzerland. 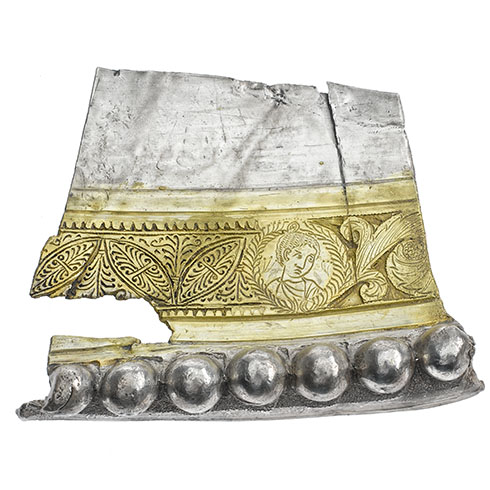 Above: A fragment from the dish.

The Traprain Law hoard weighs 22kg and is made up of over 250 fragments of objects which have been cut up either for exchange as bullion or for melting down and recycling into new objects. The surviving fragments of this dish weigh almost exactly 8 Roman ounces, suggesting that they were cut to a deliberate weight standard for use in dealings with the Roman world. Many of the fragments from the hoard, including the reconstructed dish, were originally pieces of exquisite aristocratic silver tableware. However, these dishes, flagons and platters were not used in Scotland – instead the hoard of hacked-up silver is likely to have been given as a diplomatic gift or in payment for mercenary activity. 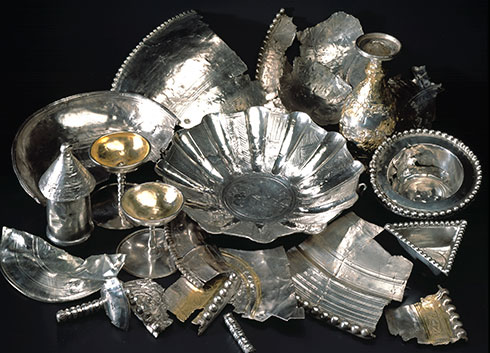 Above: Part of the Traprain Law hoard, which is on display in the Early People gallery at National Museums of Scotland.

Although composed of Late Roman silver objects, the hoard was buried around the middle of the 5th century AD, the beginning of the Early Medieval period. Roman silver had a key role in northern Britain as a means of demonstrating status and wealth. In Early Medieval Scotland, this silver was remelted to make status objects. It was used for instance to make the massive silver chains, the most complete of which is made from 3kg of solid silver.