A relic of General Charles Gordon

You are here Home > Collections and research > Our research > Past research projects > Baggage and Belonging: Military Collections and the British Empire, 1750 – 1900 > Project updates > A relic of General Charles Gordon
As our research has progressed, and we are beginning to draw connections across regimental museum collections, it is becoming clear that such repositories include objects that can be identified as military ‘relics’. A fascinating example of a military relic can be seen in the collections of the Royal Engineers Museum in Chatham, Kent. 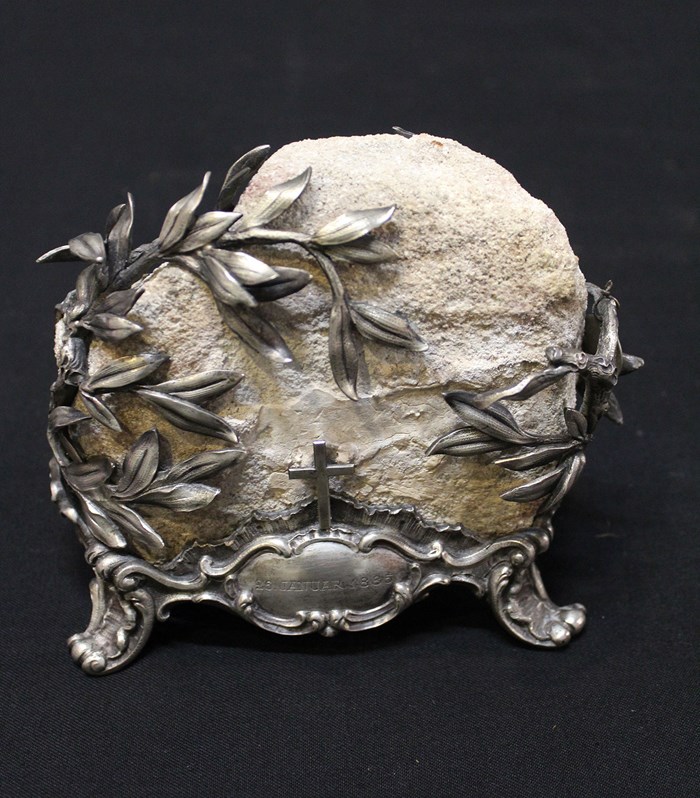 It is understood to be a stone from one of the steps of General Charles Gordon’s Palace in Khartoum, Sudan. The piece of stone is set in a delicate, ornate silver frame with four feet. The silver has been worked into the shape of leaves that encircle the stone. At the front of the silver frame is a plaque with decorative scrollwork that is inscribed with the date of Gordon’s death, 26 January 1885. On top of the plaque is a representation of a small Christian cross.

Upon first glance, it may seem curious that this piece of stone would be considered of such significant status to frame in silver in this manner. A greater understanding of the military context of the object – and the individual whose death it is commemorating – may shed some light.

General Charles George Gordon was a British Army officer who fought in the Crimean War (1853-6), the Second Opium War (1856-60), and became Governor-General of the Sudan in 1877 until 1879. Part of his mandate involved the suppression of the slave trade. Due to ill health, Gordon resigned from his post, returning to Britain in 1880. 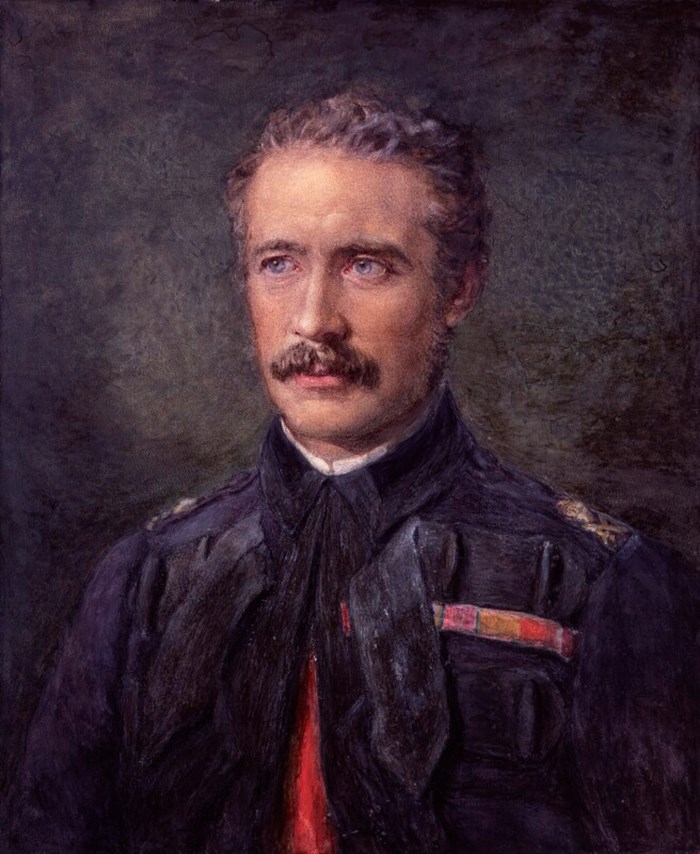 In 1881, the religious leader Muhammad Ahmad bin Abd Allah was recognised as ‘The Mahdi’ by his followers and sought to begin a rebellion against Ottoman-Egyptian military occupation of the Sudan, as well as the British, who were de facto rulers of Egypt at the time. Gordon returned to the Sudan in 1884 to assist in the evacuation of civilians and Egyptian forces that were threatened by Sudanese rebels led by the Mahdi. Khartoum fell under siege, and although the British government sanctioned a rescue party to assist Gordon, they arrived shortly after he was killed.

While the exact cause of his death is disputed, Gordon is understood to have died on the steps of a stairway in the north-western corner of his palace at Khartoum. According to some accounts Gordon was decapitated and his head was brought to the Mahdi. His body is said to have been desecrated and thrown down a well.

Such accounts of the nature of Gordon’s death transformed him into a Victorian Christian martyr, and led to an unprecedented wave of public grief across Britain. In 1888 a statue of Gordon was erected in Trafalgar Square, and his death was romanticised in a popular oil painting by George William Joy entitled General Gordon’s Last Stand (c. 1893). 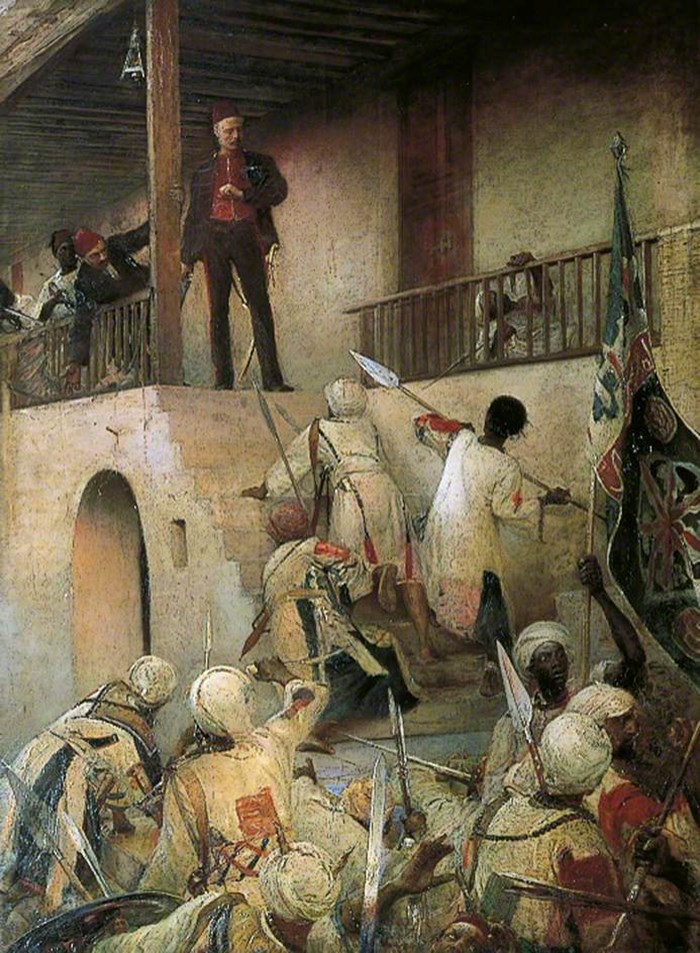 Following the work of Steven Hooper, we can identify the Royal Engineers stone and silver memorial to Gordon as a ‘contact’ or ‘touch relic’; an artefact that is associated with a high-status individual (one that inspires ‘veneration, adulation, respect’). Such relics are not as personalised as ‘body’ or ‘corporeal’ relics. In the context of mid-to-late 19th-century Britain, objects associated with Gordon – particularly in the aftermath of his death – were extraordinarily highly valued. Recent research has uncovered that this particular piece was made for and gifted to Queen Victoria by Major-General Rudolf Anton Carl von Slatin (also known as ‘Slatin Pasha’) an Austrian officer who was imprisoned by the Mahdi and held captive for over eleven years.

Significantly, relics associated with Gordon’s counterpart – the Mahdi – were also highly valued by British officers. This is especially the case for officers who sought to avenge Gordon’s death at the Battle of Omdurman, fought on 2 September 1898 during Britain’s re-conquest of the Sudan. In this battle, Sir Herbert Kitchener defeated the army of Abdallahi ibn Muhammad (known as ‘The Khalifa’), the successor to the Mahdi who had died of typhus six months after the siege of Khartoum ended. Pieces of the Mahdi’s tomb acquired by British officers can be found in a number of regimental museum collections across the United Kingdom, as well as our own. As fragments they are often mounted and include silver plaques explaining their provenance.

Fergus Nicoll, The Mahdi of Sudan and the Death of General Gordon (2005)