You are here Home > Collections and research > Our research > Past research projects > Democratising knowledge: Chambers's Encyclopaedia > About the project > Democratising Knowledge
Democratising Knowledge is a Collaborative Doctoral Project between the University of Reading, Department of Typography and Graphic Communication and National Museums Scotland, Department of Science and Technology. The project started in October 2014 and was funded by the Arts and Humanities Research Council.

Democratising Knowledge refers to two ambitions fundamental to the Chambers company. First, it refers to their use of illustrations to convey complex information visually, and in a succinct way, to people with varying degrees of literacy. Secondly, it refers to the W. & R. Chambers’s business philosophy of producing affordable, accessible publications, as described in the opening notice to Volume 1 of their Encyclopaedia in 1860:

"The information may be characterised as non-professional, embracing those points of the several subjects which every intelligent man or woman may have occasion to speak or think about. At the same time every effort is made that the statements, so far as they go, shall be precise and scientifically accurate."

When the firm launched its weekly periodical, Chambers’s Edinburgh Journal, on 4 February 1832, it contained 'Miscellaneous articles of instruction and entertainment' in an eight-page paper, sold at the affordable price of a penny half-penny [three halfpennies] (11/2 d). Much of the content was written by Robert Chambers and included articles on history, religion, language, and science as well as fiction and poetry but avoided religious and political subjects. It proved hugely successful, reaching a peak in sales of 87,000 copies a week by the late 1840s, a vast number for the time.

In 1853 the title was changed to Chambers's Journal. The journal ran continuously until 1956 and numerous authors, including Charles Dickens, William Makepeace Thackeray and Margaret Oliphant contributed to it. During this time W. & R. Chambers also established a reputation for publishing quality educational material on poetry, history, science, and mathematics, as well as various readers and textbook series for schools. They also became associated with reference material.

Chambers’s Cyclopaedia of English Literature was published in 86 weekly parts (1842-43) and then two volumes (1844). The first dictionary they published was a Dictionary of the English Language (1861), then Chambers’s Etymological Dictionary (1867). Chambers’s Encyclopaedia followed the earlier model of publication in 520 weekly parts from 1859 and then in ten volumes over the period 1860 to 1868. It was revised and updated under a new editor and published in ten volumes from 1888 to 1892 as Chambers's Encyclopaedia New Edition.

This online resource is based on a sample of nearly 160 woodblocks and the stereotype and electrotype printing plates derived from them. The collection was acquired from the company by National Museums Scotland following relocation of the firm's offices in Edinburgh during the early 1980s. The blocks and other associated printing plates date from the 1830s to the mid-20th century.

Examples in the collection range in size from full-page frontispieces to minuscule blocks the size of a match head; though this resource focuses on the most common sizes, those which are mainly designed to fit within the column width of the encyclopaedia text, or occasionally across both columns. They also illustrate different production techniques in the book industry, to give an idea of the variety of designs that were produced, and to show how the aesthetics of printmaking evolved as well as what was considered by the editors to be useful information, or information which would benefit from being illustrated, either for visual appeal or for instructional purposes. 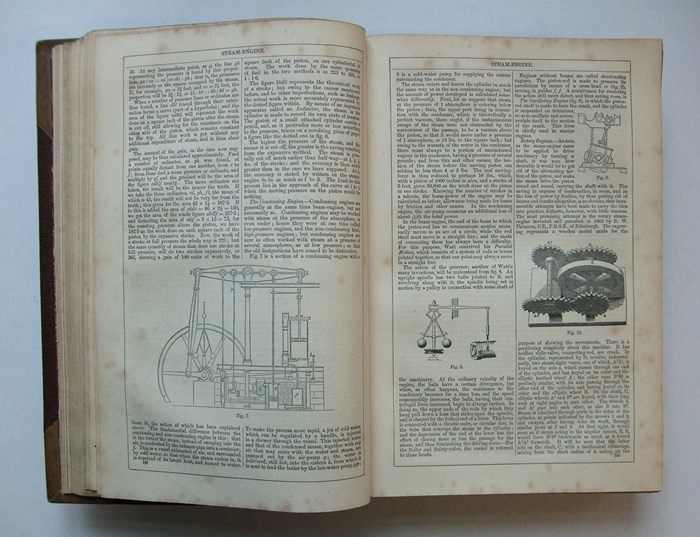 Above: A page from Chambers's Encyclopaedia showing different sizes of illustration.

Many thanks go to the Design History Society, the British Society for the History of Science, the British Association for Victorian Studies and the Catherine Mackichan Trust for travel assistance for PhD student, Rose Roberto. Many thanks to the National Library of Scotland for extensive access to the Chambers papers on deposit with them, and to Dr Sondra Miley Cooney for helping find further material on J. R. Pairman. 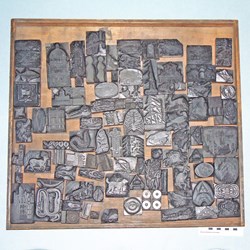 This project explored print and publishing history, and the study of cultural history through unique artefacts, in this case woodblocks and the electrotype and stereotype plates derived from them.
More