Some illustrations fit more than one category:

Above: From left to right above, examples of pictorial, facsimile and schematic-style illustrations from the first and second editions of Chambers's Encyclopaedia. Further examples of all these styles are shown in the slideshows below. 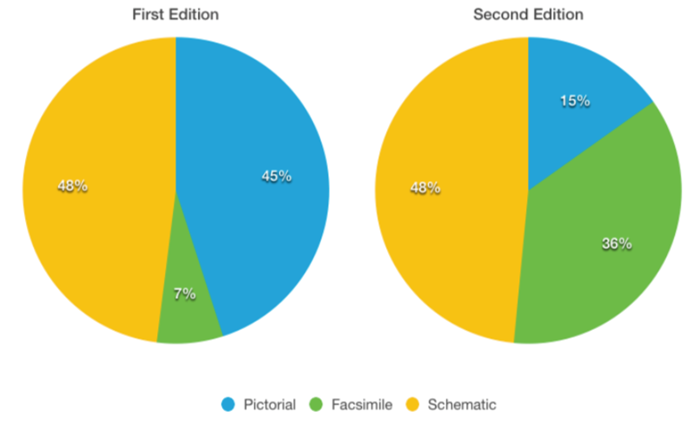 Above: Piecharts showing the distribution of pictorial, facsimile and schematic illustrations in the first and second editions of Chambers's Encyclopaedias.

While the use of what can be termed schematic illustration remained proportionally the same, the style for second edition schematics, created 20 years after the first ones, is influenced by the methods of framing and presentation dictated by photography. 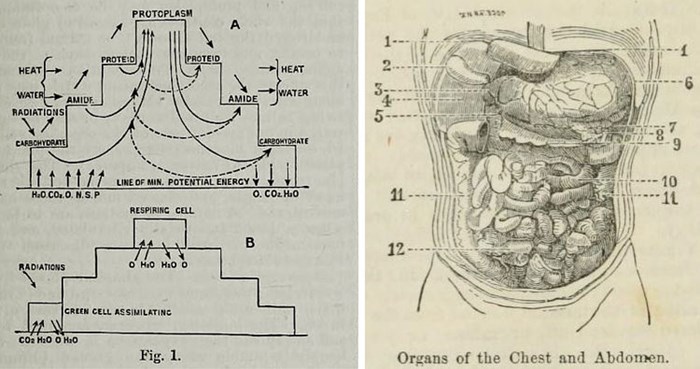 Above: Illustrations showing plant respiration (left) from the second edition and the organs of the chest and abdomen from the first edition. 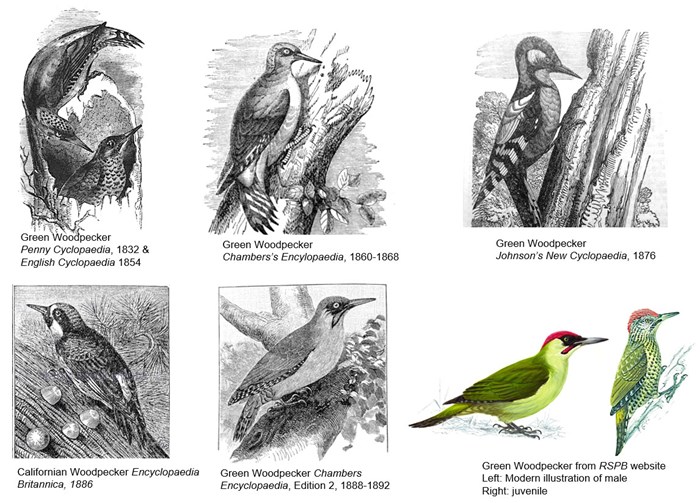 Above: Historic illustrations of the same species compared with a modern illustration from the RSPB. Illustrations from encyclopaedias,  that were published closer to the middle of the 19th century (top row) have a more pictorial style.  Later in the century, illustrations adopt a facsimile style, influenced by photography.

There were also trends in the topics selected for inclusion of these reference works. These trends extended to the way publishers chose to illustrate – or not illustrate – these entries.

Early 19th century encyclopaedias were meant for an elite reader, educated in classical languages, philosophy and humanities subjects. By the middle to late 19th century, publishers were targeting a middle and upper working class readership. In contrast to earlier encyclopaedias, Chambers did not include a long philosophical essay at the beginning of its volumes. Instead, there was merely a short preface by the editors introducing the body of the content. By initially issuing the work in many parts – a method they had perfected with earlier publications such as Chambers’s Information for the People in the 1830s – the W. & R. Chambers firm produced an encyclopaedia that was more accessible as well as more affordable, due to its use of illustrations and alphabetical rather than thematic subject ordering. They included cross-referencing of topics and indexes. They emphasized these accessible features in the preface to the first edition.

"One great aim in the arrangement of the work has been to render it easy of consultation [their emphasis].  It is expressly a Dictionary in one alphabet, as distinguished on the one hand from a collection of exhaustive treatises, and, on the other, from a set of Dictionaries of special branches of knowledge. To save the necessity of wading through a long treatise in order to find, perhaps, a single fact, the various masses of systematic knowledge have been broken up, as it were, to as great a degree as is consistent with the separate explanation of the several fragments. Throughout the articles, however, there will be found copious references to other heads with which they stand in natural connection; and thus, while a single fact is readily found, its relations to other facts is not lost sight of."

Bill Katz, a prolific author on book history and library resources, writes that the first edition of Chambers’s Encyclopaedia was influential, and set the format for hundreds of reference books produced by both American and British publishers until the end of the Second World War.

The first edition's ten-volume set cost as little as 5 shillings 7 pence per volume if purchased without covers. The cost for the second edition was £5 for 10 volumes, though payment could be made in instalments. In contrast, the 9th edition of Encyclopaedia Britannica was published in 25 volumes between 1875-1889 and sold at £1 10 shillings for each volume.

At the start of the 19th century, there was an increased interest in gathering numerical data on a wide variety of topics. An early result was the establishment of the first statistical societies, beginning with the Statistical Society of London, organised by Adolphe Quetelet and Charles Babbage in February 1834. Government agencies in the UK, France and the US routinely collected information on weather, transport, industry, commerce as well as census data, and it became possible for people studying statistics to make data-driven discoveries. This trend correlates with what scholar, Michael Friendly, characterises as a golden age in statistical graphics, from 1850 to 1900.

This data gathering, combined with new printing technologies, enabled people to come up with inventive ways of representing complex information in a graphical way. The Chambers firm made use of new data and graphical conventions in both encyclopaedia editions in the form of tables and fold-out maps inserted into each volume. These colour maps were printed by established Edinburgh cartographic publishers J. Bartholomew and W. & A. K. Johnson. While political maps are included in both editions, updated to reflect changing political realities that occurred over a two-decade period, the second edition further included a greater number of fold-out maps displaying other types of data. For example, a physical map displayed features like volcanoes, land elevation, as well as wind and ocean currents. 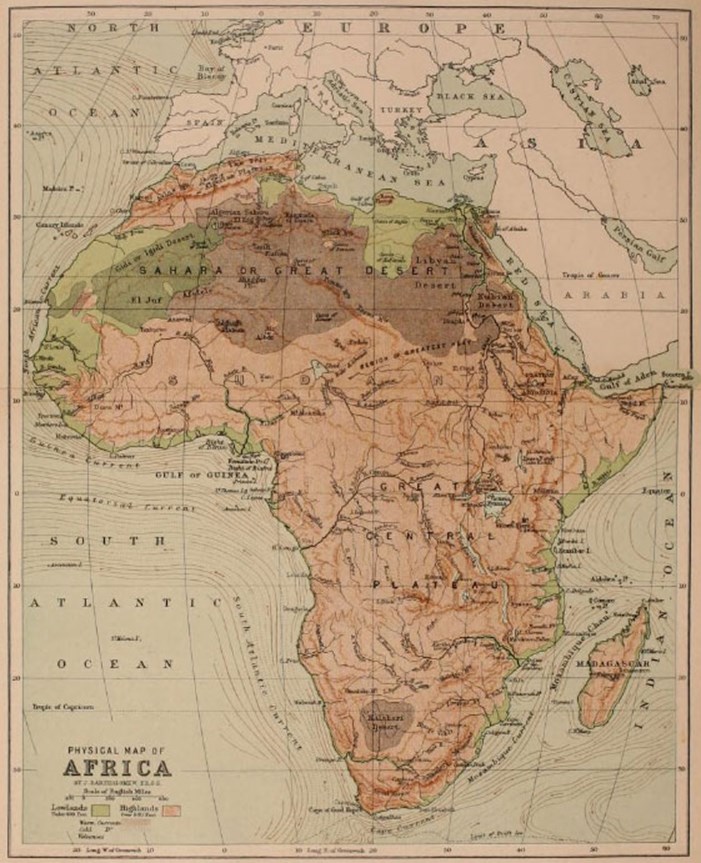 Above: Physical map of Africa, presented as a fold-out plate in the second edition, volume 1, 1888.

The number of visual graphics increased between editions, as the number of pictorial illustrations decreased. By the second edition, Chambers's Encyclopaedia editors seem to be prioritising visual material in the form of tables, which convey more factual information, as opposed to images that had a more decorative as well as instructive function.

Striking examples between editions can be seen in the entries for 'Agriculture' and 'Parasites'. While illustrations with significant details were chosen by editors for the first edition, the tables used in the second edition allow for more factual information to be displayed in a format which is easy to consult. Rather than using illustration, the visualisations in the second edition are more data-driven.

Above: The illustration for Agriculture in the first edition (left) was replaced by a table in the second edition. 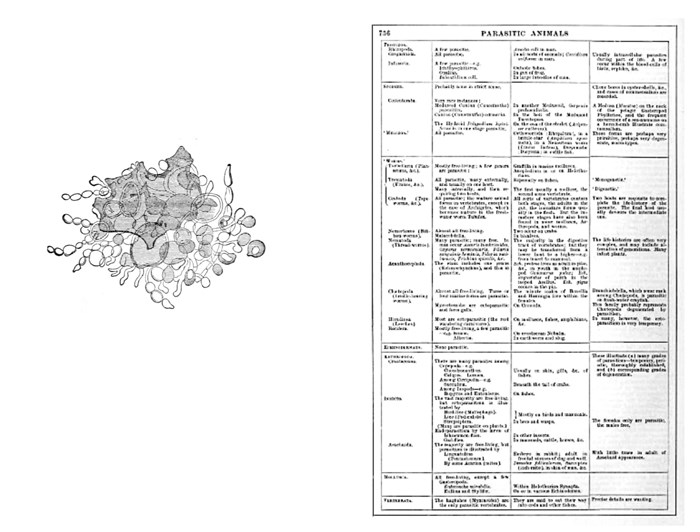 Above: The illustration for Parasites in the first edition (left) was replaced by a table in the second edition. 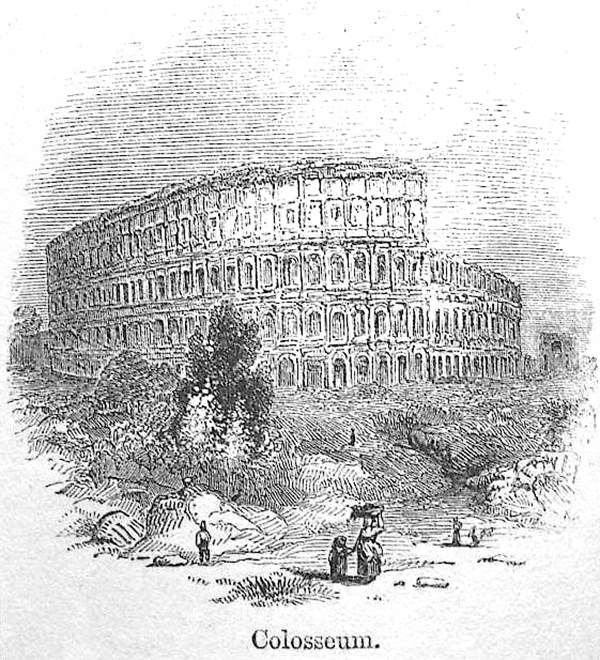 Drawings and engravings in a pictorial style trace their roots to a late 18th-century aesthetic, when concepts of the beautiful, the sublime, and the picturesque were tied to the ideals of 'good taste' found in art, literature and music. Wood engraved illustrations produced in the earlier 19th century had a visual aesthetic which gave an impression the artist might lack access to primary sources or presented a romanticised vignette of a scene, although depicting actual objects or settings. The engravers were aiming for accuracy within the confines of a pictorial style and the knowledge available to them and their viewers. They wanted to convey to a readership with little access to any illustrated material a sense of understanding of technologies, places, people or objects never previously experienced. 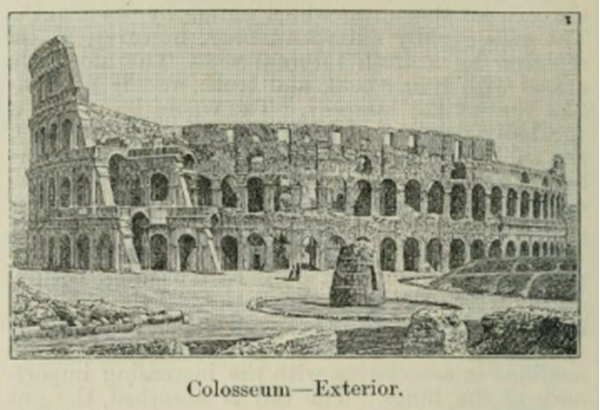 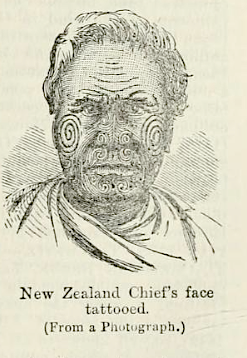 In contrast to pictorial-style images, the idea of facsimile-style representation was to depict a subject in as realistic a way as possible or show how it would be encountered in the real world. From the 1860s, photography became increasingly recognised, within scientific communities in particular, as a medium which conveyed 'mechanical objectivity'. Images which related stylistically to photographs were therefore equally deemed to convey authority.

The slideshow below shows examples of pictorial style illustrations compared with facsimile versions. 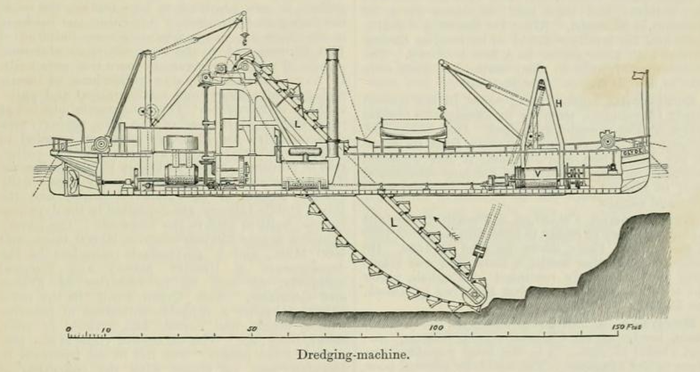 Some images do not fall neatly into any one category. Sometimes they have elements of two illustration styles. One of the most common combinations, especially in the second edition, is the facsimile-schematic illustration style. The examples below show that, while there is an attempt to depict an object or place in a realistic style, the labels and captions highlight specific features.

However photographic the look of an image, all were achieved by professional wood engravers adapting a range of pictorial syntaxes, that is, the type of marks they made on a block to produce a certain look in a printed image. By the last few decades of the 19th century, wood-engraved images increasingly referenced photographic protocols in an attempt to counter the newer technology beginning to dominate the world of illustration, although in the case of the Chambers illustrations no photo processes were involved in their production. 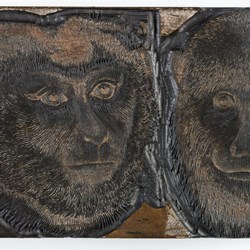 Image content analysis is used as a tool by researchers to determine patterns of use when studying large groups of images. Illustrations from both editions of Chambers's Encyclopaedia were sorted into subject categories to enable research into trends in illustration frequency and type, when comparing the two editions published 20 years apart.
More

Illustrations by subject
Back to top