You are here Home > Collections and research > Our research > Past projects > Democratising knowledge: Chambers's Encyclopaedia > Research > W. & R. Chambers and the collection history
The research for the Democratising Knowledge project focused on archival material, the woodblocks and their production, and an analysis of the illustrations in Chambers's encyclopaedias. It examined what the findings reveal about the Chambers firm and the work and social environment in which these wood engraving blocks were produced.

"Man is capable of informing himself; the means of doing this are within his power. If he were truly informed, he would not weep over his follies and errors... each generation may improve upon its preceding one, and each individual, in every successive period of time, may better know the true path, from perceiving how others have gone before them. There can be no miracle in this. It will, at best, be a slow progress; and wisdom arrived at in one age must command the respect of the succeeding ones…"

The quote above appears in the bound volume of W. & R. Chambers's new venture in 1833. The illustrated Information for the People was originally part of a series of 100 fortnightly 16-page tracts on a diverse range of subjects, sold cheaply at the Chambers regular price of a penny ha'penny (1 1/2d – around ½ pence) to enable more people to afford it. The tracts were bound and sold as a volume in 1835. It was republished several times and followed by a similar publication, the Miscellany of Useful and Entertaining Tracts, published in 177 parts from 1844 to 1847 and then bound into 20 volumes at a shilling each (12 d).

The Chambers firm provides a fascinating case study in the history of the book and the history of 19th-century publishing, specifically in the field of mass education and what would become known as the reference book genre. Founded by two brothers, William (1800-1883) and Robert (1802-1871) Chambers, in May 1832, the firm grew out of businesses as small-time bookseller and hand-press printer to become over the decades of the 19th century a publisher and printer with a global reputation and market for educational books, periodicals, dictionaries and encyclopaedias. 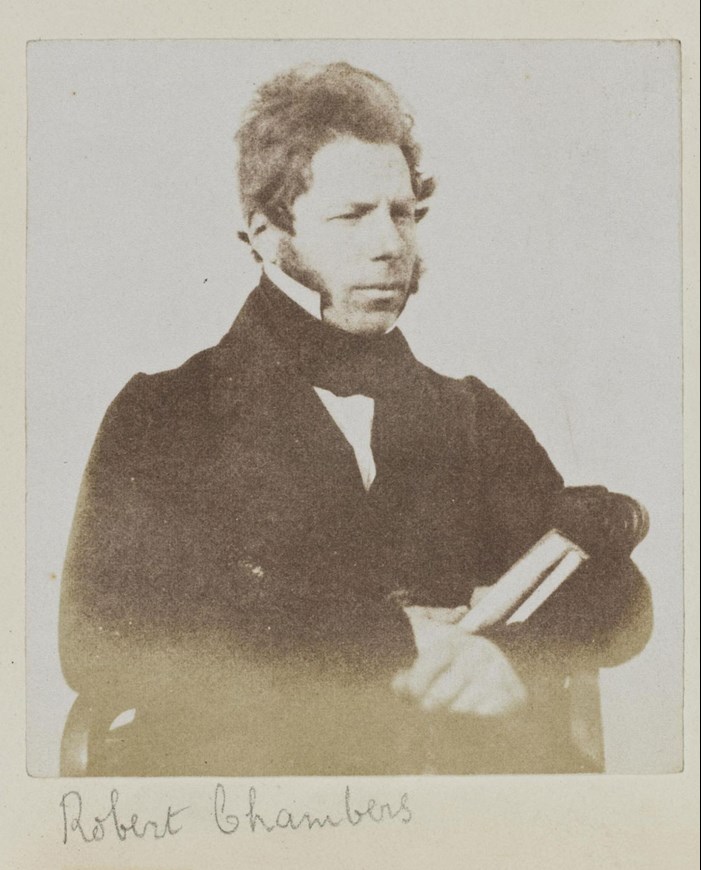 By the time W. & R. Chambers began taking subscriptions for the first edition of its illustrated encyclopaedias in 1859, the firm was a commercial success, having outlived several rival publishers of cheap instructive print. Described by the Chambers brothers as their 'crowning effort in cheap and instructive literature', the first edition of Chambers’s Encyclopaedia was published in ten volumes between 1860 and1868. The preface makes clear their aspiration for its readership:

"The information given may be characterised as non-professional [their emphasis], embracing those points of the several subjects which every intelligent man or woman may have occasion to think or speak about."

Edinburgh was one of the most prolific centres of publishing during the 19th century. Professor Ian Campbell writes in the History of Scottish Literature that the democratisation of knowledge, typified by Chambers's Encyclopaedia, was a product of the period's education system in Scotland:

This could be a description of Dr Andrew Findlater, the Encyclopaedia's first editor. The Chambers firm epitomised this Scottish sensibility in everything they produced. Their publications display a value for public education, a belief that knowledge and the opportunity to gain rewards for hard work should be available to all, an admiration for new technology and encouragement for pragmatic solutions to problems. All this was taking place at a time when literacy rates were rising fast, through greater access to schooling as well as the work of religious organisations and the rise of Mechanics' Institutes. Therefore their potential audience was growing.

The brothers were well known public figures in Edinburgh. William Chambers was elected Lord Provost of Edinburgh in1865 and was responsible for the remodelling of the city's Old Town, including the new layout around Chambers Street, named in his honour, as well as the renovation of the city's St Giles' Cathedral.

Robert Chambers wrote many books, in addition to his shorter contributions found not just in the firm’s own journals, but as a contributor to various scientific periodicals. His most contentious scientific work on evolutionary theories, Vestiges of the Natural History of Creation, was published anonymously in 1844 by a different publisher, for fear of damaging the firm's reputation due to its controversial nature. Preceding Darwin's work, it became a bestseller; a new edition was published every year for the next 10 years. Chambers was not formally identified as the author until 1884, after the death of both brothers.  His scientific work was recognised by the Royal Society of Edinburgh and the Geological Society of London; he attained Fellow status in both societies. 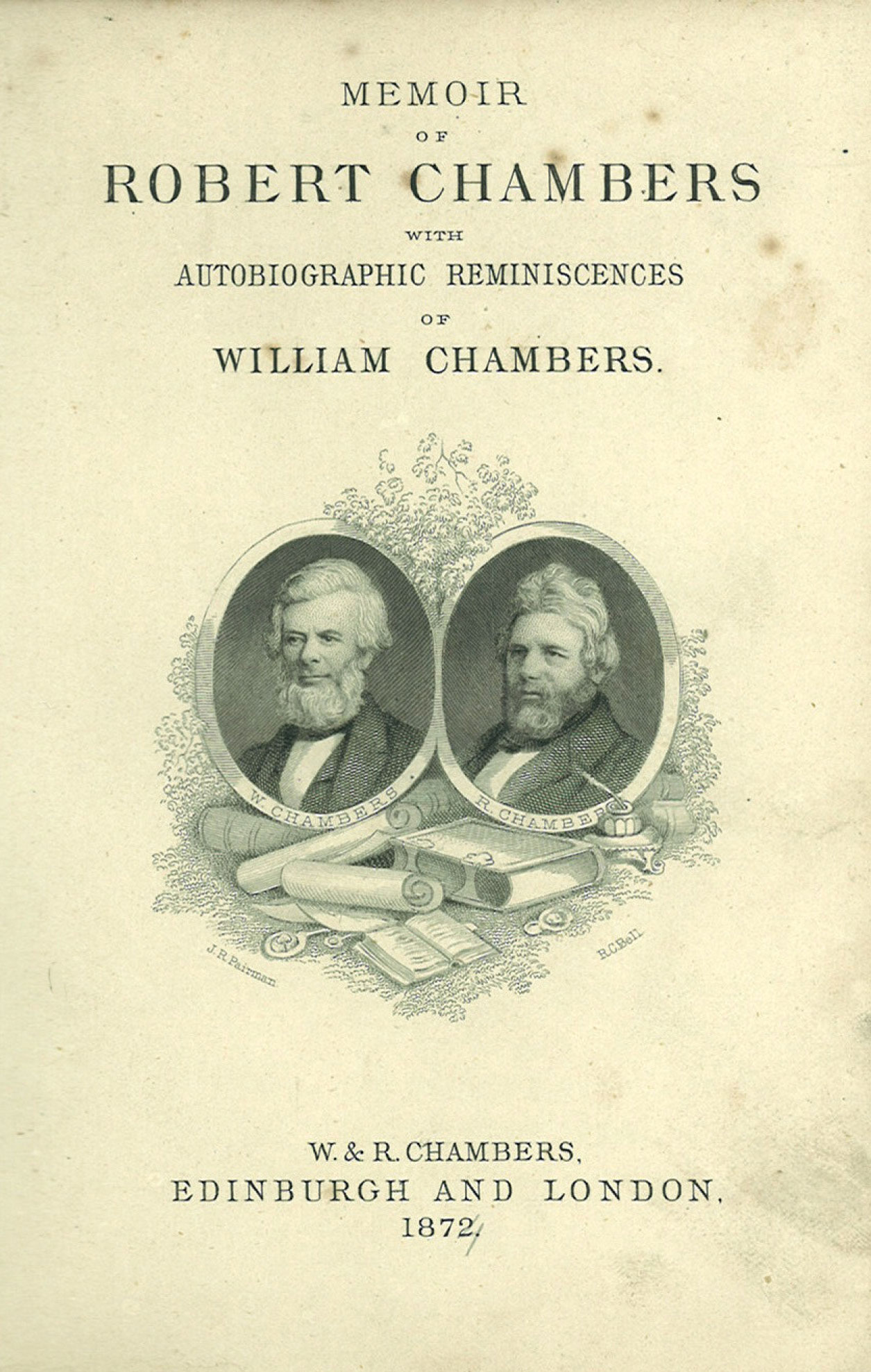 The philosophy of the Chambers establishment, as can be seen from the quote above, indicates a commitment to the idea of progress for society and individuals. The business built by the two brothers showed that they could gauge developing markets, produce popular works, and administer a self-sustaining firm. The Chambers firm remained a family-run business until the 1980s, well over a century later, when the business became part of a multinational publishing conglomerate.

In the early 1980s, when the firm was still located in Edinburgh, Chairman of the company, Anthony Stuart Chambers (1918-2007), the last family member to run the firm, placed the firm's archive on deposit in the National Library of Scotland. At the same time the collection of wood engraving blocks, stereotype and electrotype plates, and other publishing-related objects were donated to National Museums Scotland. The Museum is undertaking long-term work to make the collection available to researchers through projects such as this. 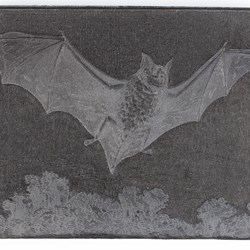 Learn more about how illustration styles changed from the mid to late 19th century, as images were influenced by the widespread use of photography and 'a golden age of information graphics'.
More

Illustration styles and subjects
Back to top