The museum houses early voyage material including objects from the second and third voyages of Captain James Cook (1772-79) and of Captain Beechey (1825-28). Since the founding of the Royal Museum in 1854, Pacific material has been actively collected through links with Scottish soldiers, missionaries, traders, explorers and emigrants. 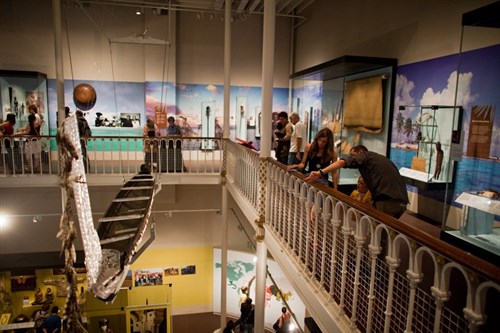 Above: Facing the Sea gallery in the National Museum of Scotland dedicated to the cultures of the South Pacific.

The collection encompasses domestic material, clothing and personal ornament, textiles (including an extensive collection of barkcloth), weapons, tools, model boats and musical instruments. Particular objects are associated with important individuals, such as Tahitian artefacts from the late 19th century brought to Scotland by Princess Titaua of Tahiti after her marriage to George Darsie of Fife. The museum continues to acquire both historical and contemporary material.

Use the links below to access more information on the Pacific collection at National Museums Scotland. These are a research tool for anyone interested in finding out more.