Gold object of the week No. 11

The Late Bronze Age hoard from Adabrock, on the Hebridean Isle of Lewis, is one of the most spectacular hoards from Bronze Age Scotland. It contains bronze axeheads, spearheads, tools and razors, as well as a decorated bronze vessel, whetstones, and beads made of glass, amber and gold. The hoard can be broadly dated to around 1000–800 BC, the same period as the Skye cup-ended ornament and the Colaton Raleigh bracelets. 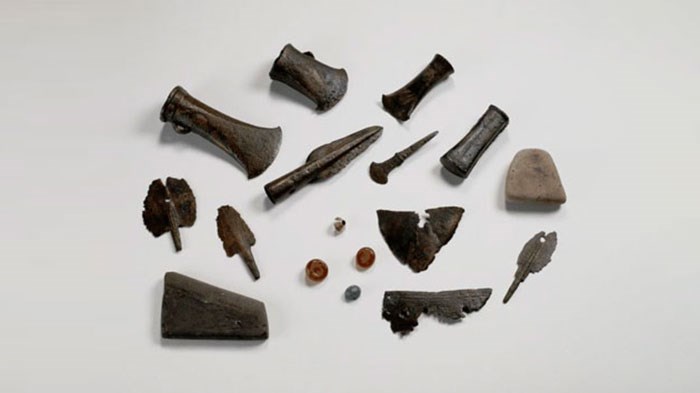 Our gold object of the week is the rather remarkable gold biconical bead from this hoard. It’s only about 12mm in diameter and is the only one of its kind currently known from Scotland. 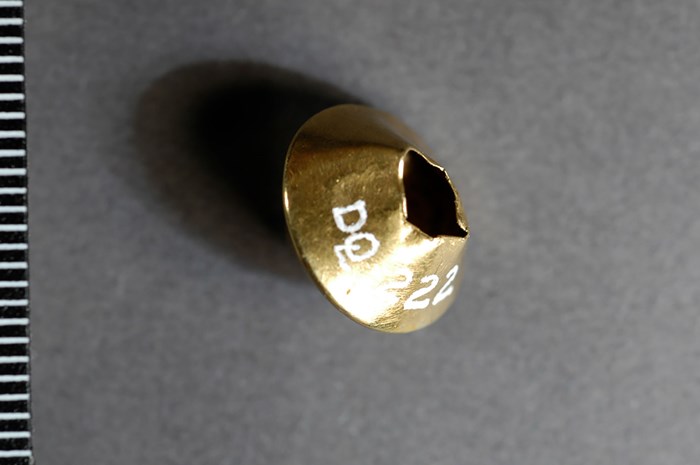 The bead was probably made by soldering two separate sheet cones together. To make each cone, a round piece of sheet gold would have been pressed into a conical die and the perforation would have been punched through using a sharp point. 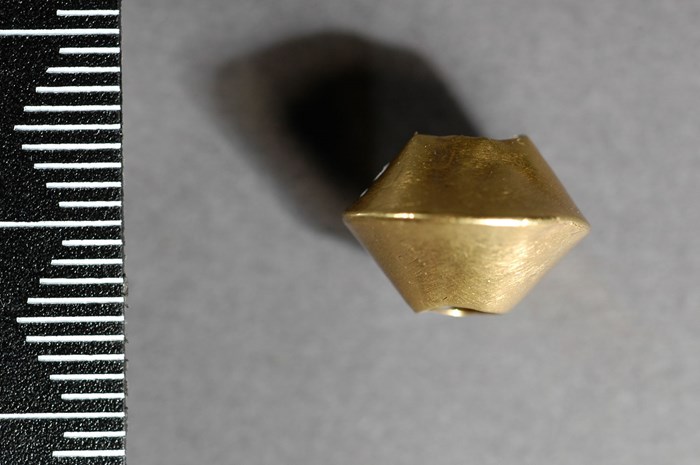 This manufacturing technique has also been identified for the decorated biconical beads from a hoard at Cruttenclough, County Kilkenny in Ireland; these date to around the same time as the Adabrock bead. Other definite Late Bronze Age examples from Britain and Ireland are more difficult to identify. Clearly, making the Adabrock bead required a specific set of skills and techniques that would not have been widely available.

Biconical beads in one form or another are known throughout the Bronze Age. Fired clay examples from Tomfarney, County Wexford, Ireland, and Crig-a-Minnis, Cornwall, date to the Early Bronze Age, about a thousand years before the Adabrock bead was produced. Biconical gold beads were found in the Middle Bronze Age hoard from Burton, Wales, alongside gold rings and bracelets, as well as bronze tools. 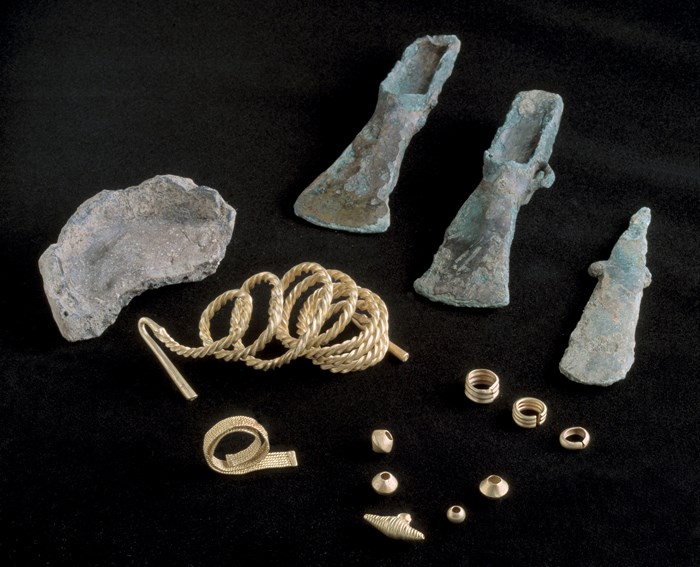 A hoard of gold objects from Beerhackett, Dorset, which contained seven biconical gold beads, is also dated to the Middle Bronze Age. Many single finds of gold beads that have been recovered across England and Wales are usually thought to be of Middle Bronze Age date, though there is no reason why at least some of these couldn’t be Late Bronze Age. 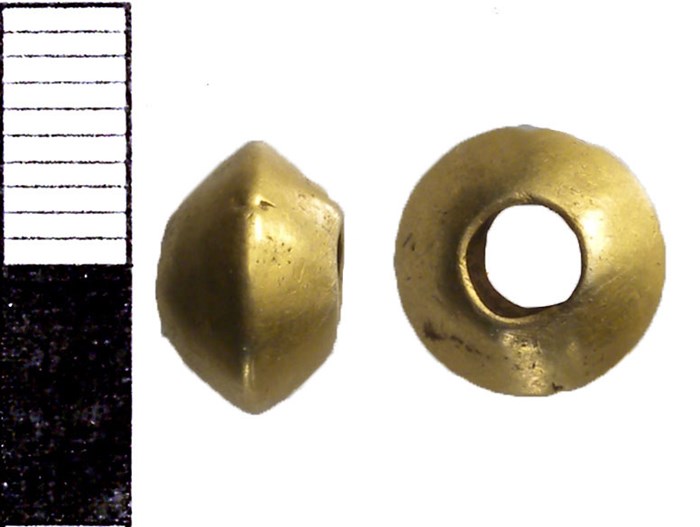 Above: A biconical gold bead from Salthouse, Norfolk. Courtesy of the Trustees of the British Museum/Portable Antiquities Scheme.

Returning to the Adabrock bead, its place in a large hoard of several different materials is another fascinating aspect that we rarely see in prehistory. Often bronze objects are only buried with other bronze objects, but here we have stone, glass, amber, gold and bronze artefacts all buried together. The bronze tools are of fairly common Late Bronze Age forms, but they are rarely found on the Isle of Lewis. Meanwhile, amber beads crop up in other Late Bronze Age hoards, such as at Balmashanner, Angus, where they were found alongside bronze bracelets and gold lock rings. Bronze Age glass beads are extremely rare in Britain and Ireland. 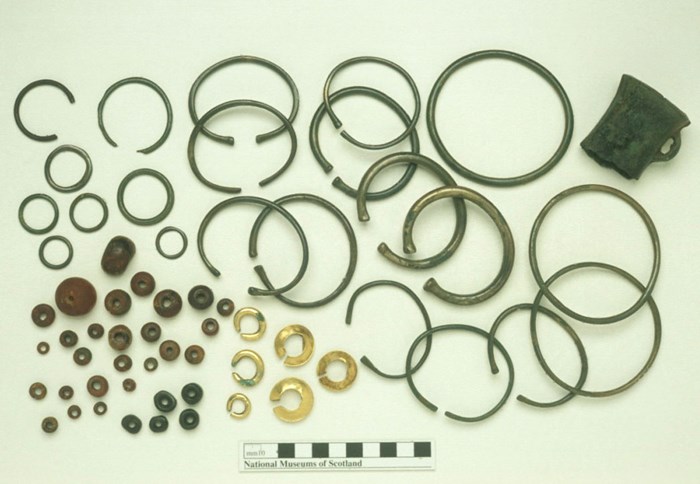 Above: The Balmashanner hoard containing bronze, amber and gold objects.

Amber, glass and gold beads would have been rare and prized objects, imported to Lewis from far away. The bronze objects may also have been imported. This all suggests that prehistoric communities on Lewis around 3000 years ago were well connected with other areas in Britain and Ireland through trade and exchange networks.

The Adabrock hoard was recovered from a peat bog, with the smaller objects (including the beads) placed above the larger objects. Peat bogs were common sites of depositional activity in the Bronze Age and the arrangement of the objects in a significant location indicates that this was an intentional gathering and burial of deliberately selected objects.

So where does this leave us with the Adabrock gold bead?

Its fine craftsmanship cannot be denied and in the context of the other objects, it is clear that its burial formed part of an important deposit. The sacrifice of such exceptional and individual objects – many of which must have been difficult to acquire – was probably linked to a significant event. The previous gold objects we have showcased have typically been found either by themselves or with other gold artefacts, but Adabrock emphasises how gold could be incorporated into a whole variety of practices and fit a number of purposes, no doubt driven by unique circumstances.

Many thanks to Mary Davis and Barbara Armbruster for their comments on the manufacture of the bead.