Gold object of the week No. 12

This week’s gold object of the week is the two Late Bronze Age bracelets from Hillhead, Caithness, probably deposited around 950-750 BC. 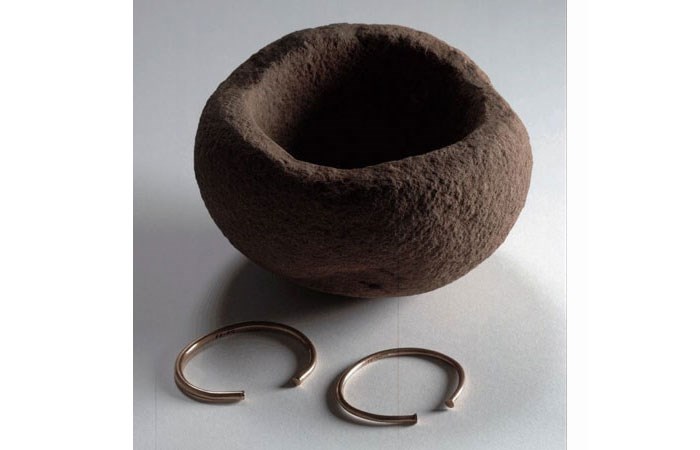 Above: The Hillhead gold bracelets and stone bowl.

In previous weeks we have described lots of different types of Late Bronze Age gold object, but the Hillhead bracelets are one of the most common forms. They are made from a slender bar of gold curved into a circle or oval shape and are known in a variety of forms across Britain and Ireland. The Hillhead ‘bar bracelets’ are an Irish variety, defined by the rounded bar and the solid evenly, expanded terminals. One is nearly twice as heavy as the other, with one weighing about 40g and the other 24g, but both are approximately the same size. The bracelets were likely too small for an adult male’s wrist, but may have fit a female. Could it be that they were intended for a child? We can’t be sure. But what is not in doubt is that these would have been the precious possessions of a person (or people) of high rank in Late Bronze Age society. 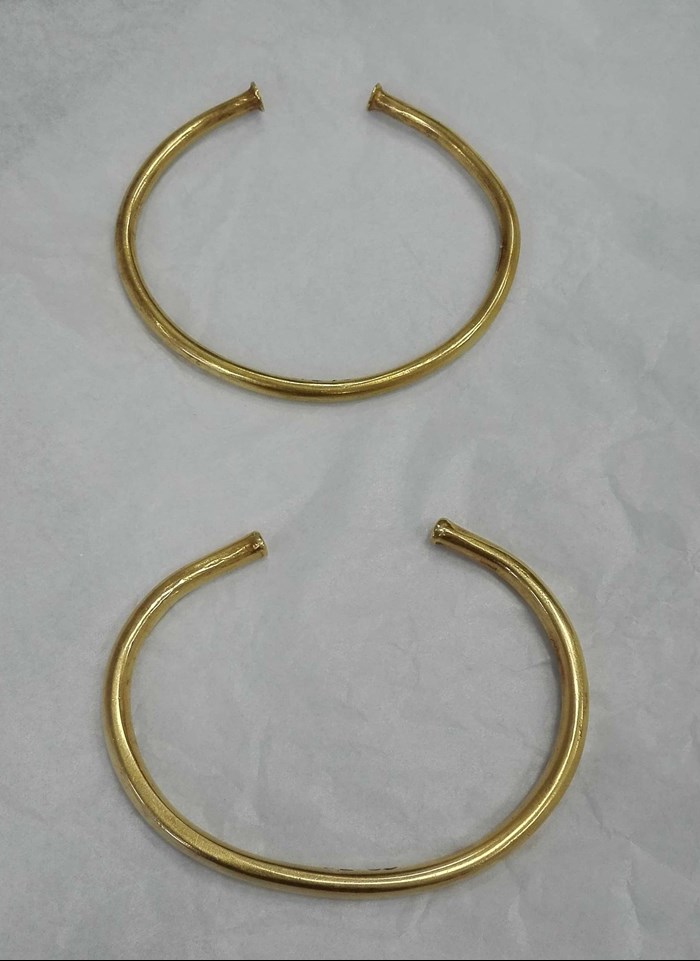 Above: The two Hillhead bracelets. 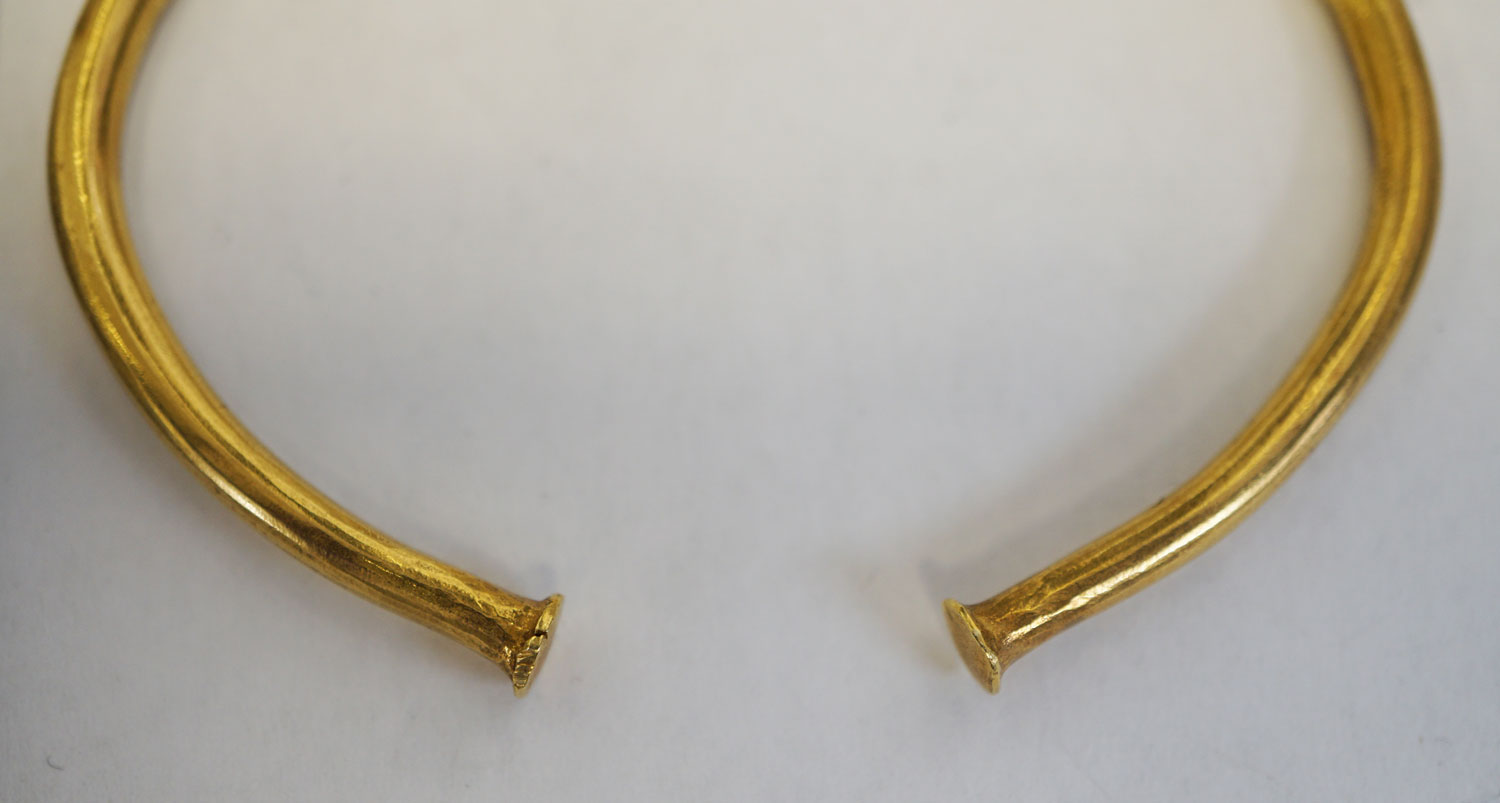 Above: The flattened terminals of one of the bracelets.

The bracelets were found in a stone bowl in February 1913 while ploughing a small mound between Hillhead Broch and what is now John O’Groats airport. The stone bowl is made of sandstone and had probably been shaped using a stone tool, with one side hollowed out. There were no other objects recovered from the mound. We don’t know whether the mound had covered a grave or not.

Gold bar bracelets have been found in a variety of contexts, but the Hillhead examples are the only ones that have ever been found in a stone bowl. Of course it is possible that other bracelets had been buried in organic containers that no longer survive. We have previously highlighted the gold-bound spearhead from Carnoustie, wrapped in sheepskin that was only preserved due to unique circumstances. And a gold cup-ended ornament was found in a boat-shaped wooden box at Killymoon, County Tyrone, Northern Ireland. It’s likely that many other Bronze Age objects were wrapped or buried in containers such as wooden bowls or boxes, but there is no longer any archaeological evidence for this.

Why were these precious bracelets from Hillhead buried? They were certainly deposited deliberately, but as with many objects that were buried at this time we’re not sure why. Was it a way to store the bracelets safely in a time of strife? Or were they being offered to the gods? Another pair of gold bracelets was found at the base of a cliff at Kirkhill, Berwickshire – an odd place to find such precious objects, which could suggest they had been a gift to the gods. 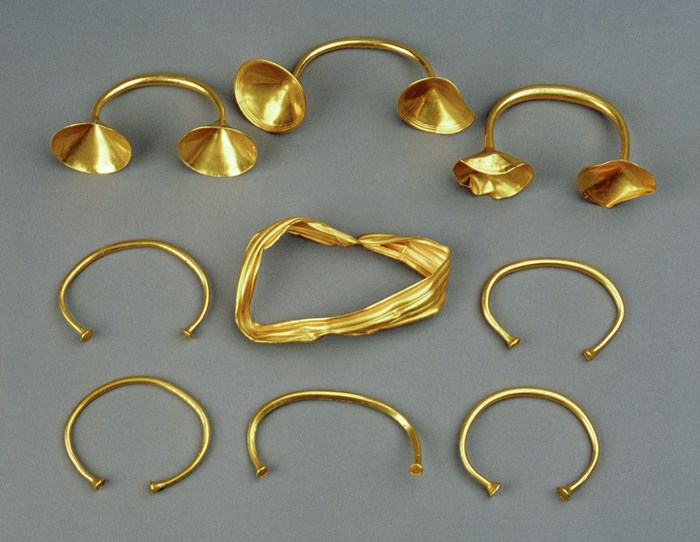 Above: Hoard found at Heights of Brae in Ross and Cromarty.

Gold bracelets frequently occur as parts of larger hoards, containing a range of objects. One such hoard, found at Heights of Brae in Ross and Cromarty, consisted of five gold bracelets and three cup-ended ornaments, whilst two bracelets and three rings were excavated near Duff House in Banffshire. An exceptional situation is recorded from Coul on Islay, where 36 gold bracelets were found interlinked in a bunch, like a prehistoric set of keys! The fact that some people were able to amass large amounts of such a rare material – and perhaps to give it away to the gods – gives us an insight into the workings of Late Bronze Age Scotland and makes us wonder about how they were able to become so wealthy in the first place.

The Hillhead bracelets are on display in the Early People gallery at the National Museum of Scotland.