You are here Home > Collections and research > Our research > Past research projects > Tibetan collection > Research > Colonial collections
In contrast to missionary and military collectors, colonial collectors amassed a broad range of objects from areas that were, and still are, considered ethnically and culturally Tibetan to some degree, including areas of Nepal, Bhutan, Sikkim, Ladakh and West Bengal.

Missionary and military collectors represent a significant portion of those associated with Tibetan culture in the National Museum of Scotland. However, there were many varied reasons why British agents came into contact with Tibetan material culture. Missionaries and military personnel had singled out ‘Tibetan’ culture, despite often working with or being resident near other cultural groups. By contrast, colonial collectors gathered a broad range of objects from areas that were, and still are, considered ethnically and culturally Tibetan to some degree, including areas of Nepal, Bhutan, Sikkim, Ladakh and West Bengal.

Colonial collectors did share some of the characteristics visible within missionary and military collector groups. Like military officers, many other British agents came from a long line of imperial workers, their families moving back and forth between Britain and India across the generations. In common with missionaries, many of these collectors lived and worked in areas bordering Tibet, and were also in close proximity to other British agents with differing strategies, emphasis and opinions about Tibetan material culture. Racial prejudice and a belief in Christian superiority were not confined to missionary discourse, nor was a concern for hierarchy and status the sole purview of the military.

Most of the people grouped under this heading of ‘colonial collectors’ were resident in the hill station of Darjeeling, in the Indian state of West Bengal. Tracing their biographies has revealed tea merchants, governors, traders, political officers and tourists, who all came into contact with Tibetans and Tibetan material culture in different contexts, places and across a long span of time.

Born in Gloucester to a wealthy Irish family, Lilian Le Mesurier (nee Bruce) had been well educated and well travelled by the time she married Captain Eugene Le Mesurier in 1896. Around the same time Eugene was given the posting of Political Assistant to the Resident in Kashmir, a role which was effectively a diplomat representing British interests (political and economic) in the region, and the couple relocated to Srinagar. In 1900 he became Assistant Deputy Commissioner and in 1903, in this capacity he, along with his wife Lilian, travelled through the region of Ladakh, also known ‘Little Tibet’. The region was part of an important trade route and had (and still has) a large Tibetan Buddhist population, including several large and famous monasteries, which were regularly visited by European travellers. During this trip Lilian Le Mesurier made a large collection of Tibetan objects, most of which were collected in the monasteries of Hemis and Spituk, along a traditional route between monastic centres along the Indus River.

Lilian’s collection is not only large (107 objects) but reflects on many questions about the relationships between British and Tibetan people at this time. On her return to Srinagar, Lilian wrote two papers about her collection. One, ‘Tibetan Curios’, was published as the final chapter of the book ‘Round Kangchenjunga: A Narrative of Mountain Travel and Exploration’, written by the Royal Geographical Society President, Douglas Freshfield. The paper not only shows the clear way in which Lilian divided objects as either ‘religious’ or ‘secular’ (given a greater value to the former) but also how she collected, by forming friendships and trading relationships with important individuals within the monastic system. She considered the leader of Spituk Monastery (Blo bzang bstan pa’I rygal mtshan, the eighteen incarnation of the Kushok Bakula Rinpoche) a close personal friend and he was highly influential in the formation of her collection, helping her purchase items from his monastery or exchange them for other goods. He also supplied her with a lot of information about what objects were used for and how old they were, something she seems to have found particularly important. This painting is of the first Bakula (who was one of the sixteen disciples of Buddha) [see photo below] and is presented in a shrine box. Whilst the shrine box was already quite old when Lilian received it, dating from the mid eighteenth century, the monks painted her a new image to go inside it, as the original was considered too sacred to sell. 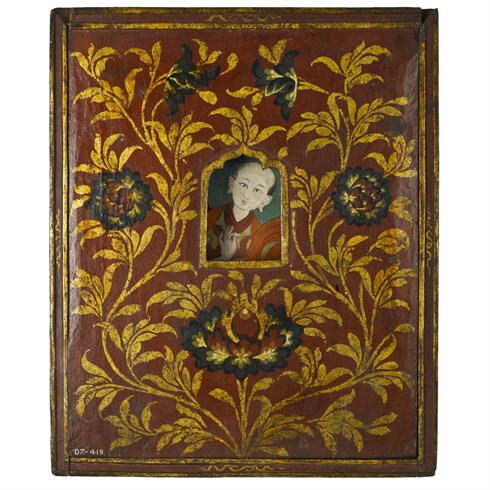 Above: A Tibetan painting of the first Bakula (one of the sixteen disciples of Buddha)

Although many of the objects she collected in Ladakh’s monasteries were used in Tibetan Buddhist practices, some were entirely practical, such as this large ladle, which would have been used in the monastery’s kitchen, where food was prepared for hundreds of monks daily. Lilian was one of the only collectors of Tibetan material culture to collect items relating to the domestic routines of the monasteries and not just their more iconic objects associated with Tibetan Buddhism. The collection therefore reminds us that these were not just treasure houses, but living, breathing institutions.

The main centre of Ladakh is the town of Leh, which in 1903 was a major trading post and an area known for its trade in Tibetan curios. However, the region was not only under the influence of Tibetan Buddhism and had plenty of its own cultural traditions. One of these was the use of stone in the manufacturing of goods. As the region is at such a height, wood is a scarce commodity and alternative materials were often used. Lilian Le Mesurier collected a number of stone objects from the region of Baltistan, north west of Leh, including these two knives [see photos below]. 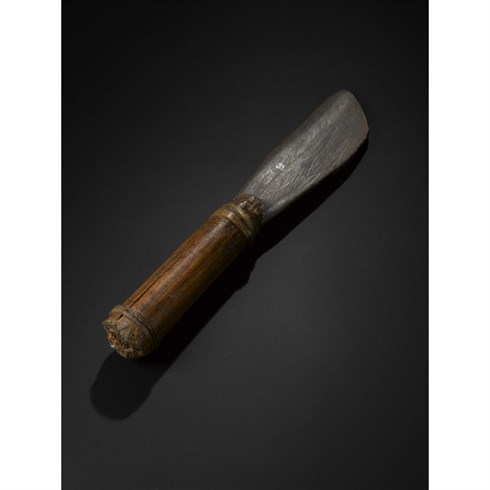 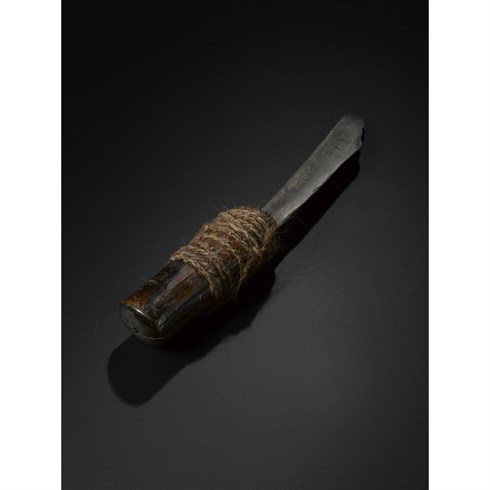 A year after she wrote ‘Tibetan Curios’, Le Mesurier wrote another paper, this time called ‘Tibetan Art’, for The Studio magazine. In this paper she examined the history of Tibetan metalworking, using several of the pieces collected in 1903 but which she later sold to the Royal Scottish Museum. One of these she considered a particularly fine, rare and old example. What she particularly liked about older Tibetan metalwork was its simplicity and appreciation for areas that were not decorated, in contrast to what she thought of as the fussy styles of north Indian metalwork.

In 1905 Lilian and Eugene returned to England, settling in Kent. The same year their son was born but Eugene died shortly afterwards in 1907. Finding herself short of funds, Lilian sold her collection of Tibetan objects collected in Ladakh to the Royal Scottish Museum in 1907. The museum reports for that year show they recognized her connoisseurship and deep appreciation for Tibetan art. She must have given a copy of her article ‘Tibetan Curios’ to the museum’s curator, as many of the descriptions noted down in the museum’s object accession register are direct quotes. For example, the shrine box containing the image of the Bakula Rinpoche has the entry ‘…containing a holy picture of the Buddhist Saint Bukola [sic], whose seventeenth incarnation is now Abbot of Spittock [sic] monastery. From the new Gumpa [sic] at Leh’. This and much other provenance information found within the Museum’s accession register entries for Le Mesurier’s objects is all found in her article, already published by the time the objects were sent to Edinburgh. As there is no evidence that Le Mesurier went to Edinburgh herself, it stands to reason that a copy of the article, provided with the collection, was the source of the Museum’s own information.

Lilian was still young when Eugene died and she went on to have a varied and interesting life. She never remarried but became very active in movements for social justice, specifically the judicial system and the treatment of young offenders. In 1933 she was given the title of Order of the British Empire (OBE) for her work, and appears to have remained active in the field of social work until her death thirty years later in 1963.

Isabelle Tyrie was born in Calcutta, the daughter of Colonel David Tyrie, the Assistant Deputy Commissioner to the Governor of Bengal. Calcutta was both the administrative capital of the district and a major trading port, and her father was involved in both, having a political posting and having interests in the Jute industry. The family lived in a large house on the outskirts of Calcutta, with a host of servants and the Tyrie’s lived a privileged life, which included meeting the British Royal Family when they attended the Delhi Durbar in 1911.

During the summer months, when the heat in Calcutta became too unbearable, the family (along with many other British residents in Calcutta) would decamp to Darjeeling, which was the summer administrative capital for Bengal. It was at this time that David Tyrie collected a small group of Tibetan objects, at the heart of which were a gilded copper altar and associated items including a ceremonial thunderbolt, known as a dorje, and two ceremonial daggers, called phurba. This group, used as a set, would have sat within a shrine area in a wealthy Tibetan Buddhist home. Through his status as a high-ranking political agent, David Tyrie would have met many influential Tibetans, Nepalese and Bhutanese families in Darjeeling, who may have gifted the pieces. However, such items were also available in the burgeoning curio stalls, selling a huge range of Tibetan objects within Darjeeling’s main bazaar. Isabelle Tyrie was interviewed shortly before her death in 1989 about her time in India, but makes no mention of where her father acquired these items.

A pair of woman’s earrings are typical of the type of object available in the Darjeeling bazaar [see photo below]. Their shape is indicative of the Lhasa region and their materials (gilded copper with inset turquoise pieces) often used in Tibetan jewelry manufacture. Easily portable and aesthetically pleasing, many such pairs would have been sold to tourists and travellers in the early twentieth century, and they can still be found in Darjeeling’s shops today. 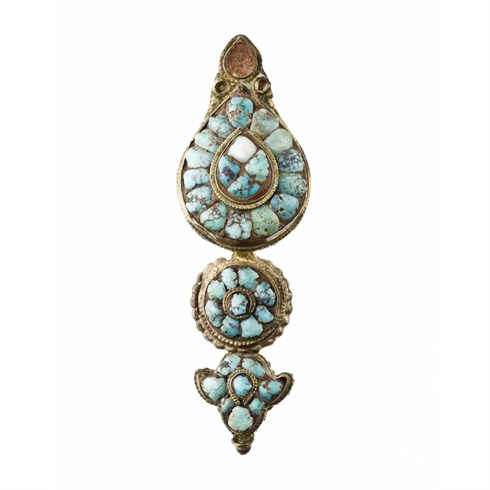 Above: Tibetan women's earrings made of gilded copper and inset turquoise pieces

In fact, so great was the trade in objects in Darjeeling, that many objects were manufactured specifically for the tourist market. An object called a dice box in the Museum’s records shows a mixing of styles and cultures. It appears to reuse bone plaques, similar to those found on the bone apron collected in 1904 by Major Ottley, but also includes the use of turquoise chips and brass wire decoration. The pulling together of these many different elements, was designed to create a pastiche of a Tibetan object in a way that was believed to be appealing to a European buyer.

Colonial collectors like David Tyrie were less concerned with the age or provenance of the objects they collected, instead tending to buy items that appealed to their personal tastes or fitted into the décor of their family homes. All the items he collected in Tibet, along with those collected on later trips to Japan and China, remained part of the domestic décor until Isabelle’s death in 1989.