Egypt, Past and Present in Dialogue

Discuss the legacies of British archaeological practices in Egypt at a panel discussion chaired by journalist, writer and broadcaster Samira Ahmed.

Discuss the legacies of British archaeological practices in Egypt at the first panel discussion of the 'Egypt's Dispersed Heritage' project chaired by journalist, writer and broadcaster Samira Ahmed.

This event has sold out.

Dr Margaret Maitland was lead curator for the Ancient Egypt Rediscovered gallery that opened at the National Museum of Scotland in February 2019. Her 2017 exhibition The Tomb: Ancient Egyptian Burial at the National Museum of Scotland told the story of a tomb that was reused for over 1000 years. One year on from the opening of the Ancient Egypt Rediscovered gallery, Margaret discusses how British archaeological practices in Egypt contributed to National Museums Scotland’s collections, the ways in which we address these histories in our displays, and how the gallery highlights Egyptian voices both past and present.

Dr Alice Stevenson is Associate Professor in Museum Studies at UCL's Institute of Archaeology and the author of the newly published Scattered Finds: Archaeology, Egyptology and Museums. As the lead for the AHRC project 'Artefacts of Excavation', Alice will present the project’s research on the international distribution of finds from British excavations in Egypt between 1880–1980. Alice will then introduce the second phase of the project, ‘Egypt’s Dispersed Heritage: views from Egypt’. This phase seeks to disseminate information about this history of dispersal and create opportunities for dialogue with modern Egyptian communities.

Heba Abd el Gawad, is the postdoctoral researcher for the AHRC funded project ‘Egypt’s Dispersed Heritage: views from Egypt’ at UCL’s Institute of Archaeology. Heba specialises in the history of Egyptian archaeology with particular focus on past and present Egyptian perceptions and representations of the collection and distribution of archaeological finds from Egypt to the world. Heba will discuss how Western museums and modern Egyptian communities can work together to reanimate Egypt’s multi-layered living story.

Samira Ahmed is an award-winning journalist, writer and broadcaster who has presented many news and arts programmes for BBC TV and radio, including Newswatch. She hosted Sunday Feature ‘The Victorian Queens of Ancient Egypt’ on BBC Radio 3. This documentary investigated the Victorian women who brought the treasures of Ancient Egypt to northern England, creating museums that endure to this day. Samira will chair a panel discussion with all of our speakers exploring the legacies of British archaeological practices in Egypt and ask ‘how can a dialogue be initiated and sustained between UK museums and modern Egypt?’ 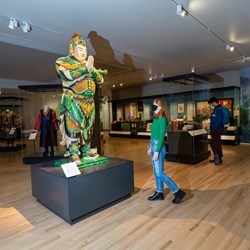 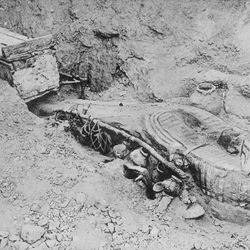 Excavated in 1908, the complete burial of the ‘Qurna Queen’ expands our understanding of a tumultuous time in Egypt’s history.
More
Back to top