What is engraved on the bowl?

Created by designer Drummond Masterton, this milled aluminium bowl is inspired by the 60th anniversary of Italian cyclist Fausto Coppi winning the Giro d'Italia-Tour de France double in 1949. After this historic victory, Coppi was crowned Il Campionissimo: champion of champions.

Masterton’s designs for Campionissimo are inspired by the alpine cycling landscape Coppi navigated to win the 1949 Giro d’Italia. 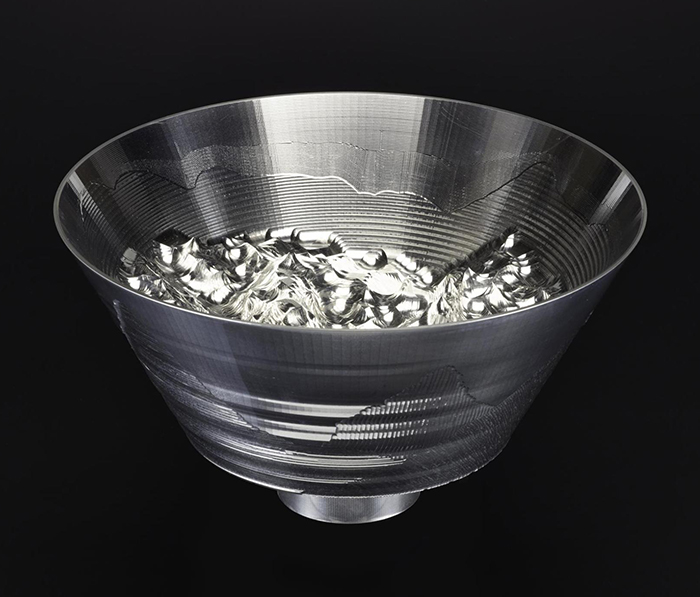 Above: Inside view of Campionissimo

On the outside surface, you can see the outline of five hills from the decisive stage of the 1949 Giro. Experienced cyclists and Giro fans might recognise the inclines of Colle della Maddelena, Col de Vars, Col d’Izoard, Col de Montgenevre and Sestriere. Together, these climbs total around 4,700 metres of ascent.

The inside of the bowl is milled to mirror the cycling terrain surrounding the Col d'Izoard. Coppi often made his race-winning moves on this tough climb.

How is the bowl made?

Campionissimo is the result of several years’ experiment and practice with Computer Numerically Controlled (CNC) milling. Like drilling, milling uses a rotating cylindrical cutting tool. However, the cutter in a CNC milling machine can also move along up to five axes to create a variety of shapes, slots and holes.

Using software, CNC milling produces shapes that would be almost impossible to achieve with manual tools. By creating user-defined toolpaths, Masterton overrides software presets and gains complete control over the movement of the cutting tool. Indeed, industrial machines like these are designed to speed up production but the intricacy of Masterton’s work can take hundreds of hours to create, subverting their original purpose.

Drummond Masterton is a Scottish designer. Born 1977 in Renfrewshire, he trained at Gray’s School of Art, Aberdeen, before specialising in Metalwork and Jewellery at the Royal College of Art. He currently lectures in 3D Design and Digital Production at University College Falmouth.