One of our greatest treasures, the Lennoxlove toilet service was discovered at Lennoxlove, a towerhouse near Haddington, to the east of Edinburgh, shortly after the death of the 12th and last Lord Blantyre in 1900.

Toilet services were frequently given as wedding presents.

Who owned the service? 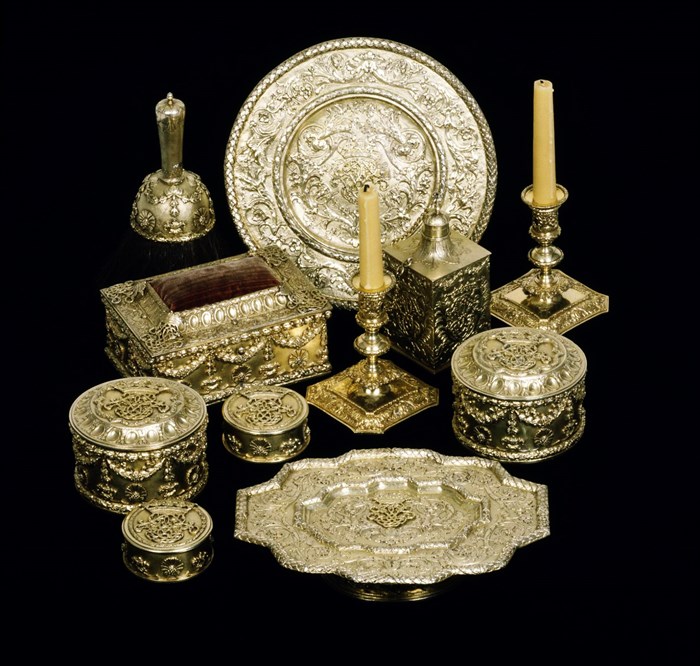 Although no documentation has yet been discovered, all the evidence indicates that the service was owned by Frances Teresa Stuart, Duchess of Richmond and Lennox (1647-1702). Frances was a celebrated beauty of the court of Charles II, who attracted the attention of the king. The diarist Samuel Pepys thought she was ‘the beautifullest creature that ever I saw in my life’, and – not surprisingly – she was the model for the figure of Britannia on the reverse sides of the old British coinage.

A large gold or silver-gilt toilet service – and especially a toilet service made in Paris – demonstrated the very high status and sophistication of its owner. Such services were used ceremonially in the bed chamber, and privileged people were allowed to watch the king, queen or grand aristocrat being groomed and dressed for the day. The Lennoxlove toilet service would have enabled Frances to have maintained her dignity when Charles II’s new French mistress, Louise de Keroualle, Duchess of Portsmouth, began to fill her large apartments at Whitehall with ‘massy pieces of Plate, whole Tables, Stands etc.: of incredible value’. 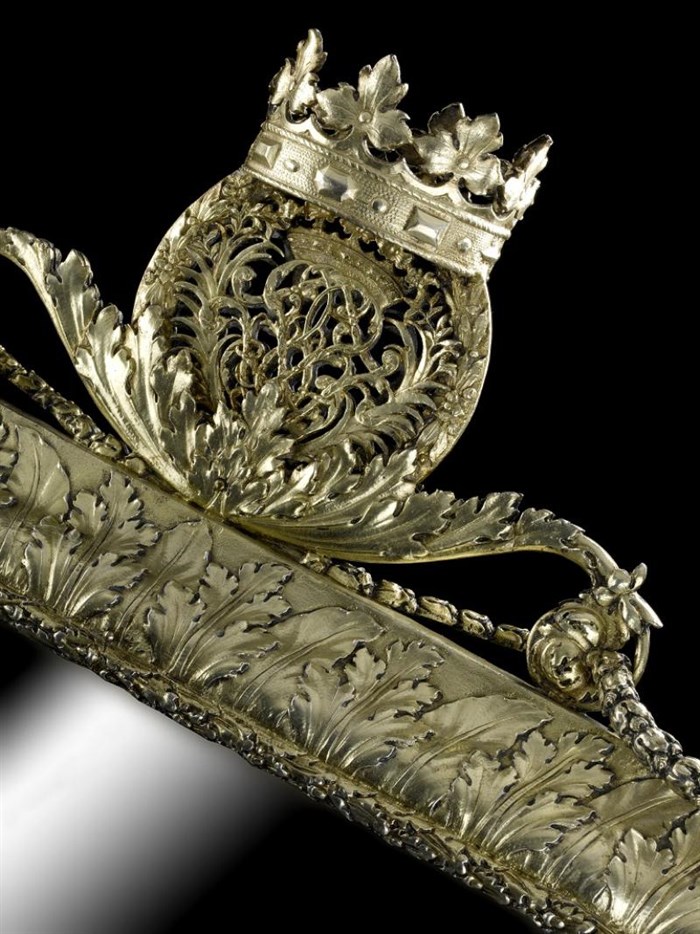 Above: Detail of the mirror from the Lennoxlove service.

We can be sure that the Lennoxlove service belonged to Frances because she bequeathed the bulk of her estate to her ‘near and dear kinsman’, Walter Stewart, the Master of Blantyre, who became the 6th Lord Blantyre in 1704. In her will, Frances instructed her trustees to purchase a property for her cousin and to rename it Lennoxlove, which they duly did. One can therefore picture Frances’s service being transported up from London to the Blantyre’s new house, along with some of her other possessions. The presence of ducal coronets and complicated ciphers which can be read as the initial ‘FTS’, for Frances Teresa Stuart, on the chest and most of the 17 silver-gilt items confirm that the service did, indeed, belong to ‘La Belle Stuart’.

The new owner of the toilet service, Mr William Baird, the younger son of Lord Blantyre’s second daughter, apparently came across the chest and its contents in a disused room in the tower. It was immediately recognised that the service was a very important survival from the reign of Louis XIV of France and it was quickly included in a major exhibition of antique silver in London. From 1927 until 1953, the Lennoxlove service was on loan to National Museums Scotland, before being purchased at auction in 1954 for what was then thought to be the extremely high price of £17,000. 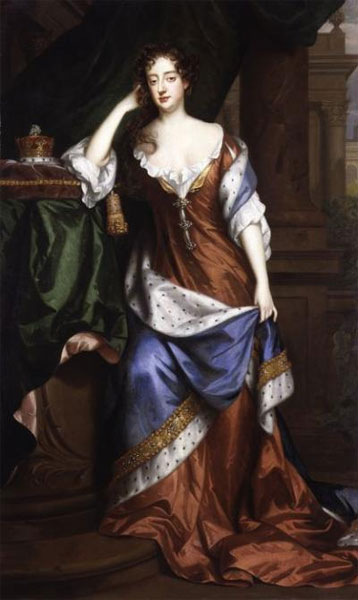 Above: Portrait of Frances Teresa Stuart by William Wissing and Jan Van der Vaart, 1687. Click on the image to see the painting in more detail. © National Portrait Gallery.

Why is the service important? 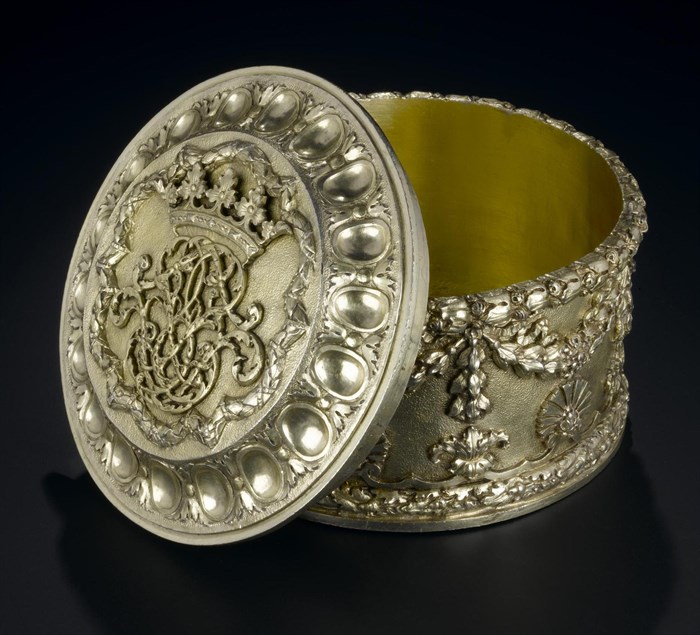 Above: Casket from the service.

The Lennoxlove service is one of only three marked Louis XIV toilet services still in existence. Almost all of Louis XIV’s own magnificent gold and silver items and those of his courtiers were turned into bullion and coin following financial crises in 1689-90 and 1709, in order to pay for the Sun King’s hideously expensive wars. Most of the main surviving Parisian services and individual pieces were exported from France shortly after completion and thus avoided the melting pots.

The most important survival is unquestionably the superb 23-piece service now at Chatsworth, which was owned by Queen Mary, the wife of William III. Then comes the 17-piece Lennoxlove service, which is the only one to retain its travelling chest and protective leather boxes or cases. Finally, there is the service owned by Princess Hedvig Sophia of Sweden, in Rosenborg Castle, Copenhagen, with 17 pieces by a number of Parisian goldsmiths.

Who made the Lennoxlove service?

As one would expect, the pair of candlesticks in the Lennoxlove service is by a specialist maker, who concentrated on making candlesticks and other lighting equipment. He can be identified as Pierre Masse. A master goldsmith since 1639, Masse was serving as a warden of the Paris guild of goldsmiths when these two candlesticks were made in 1661-62. Four other sets of candlesticks by him are known and provide ample proof that he was a leading candlestick maker. 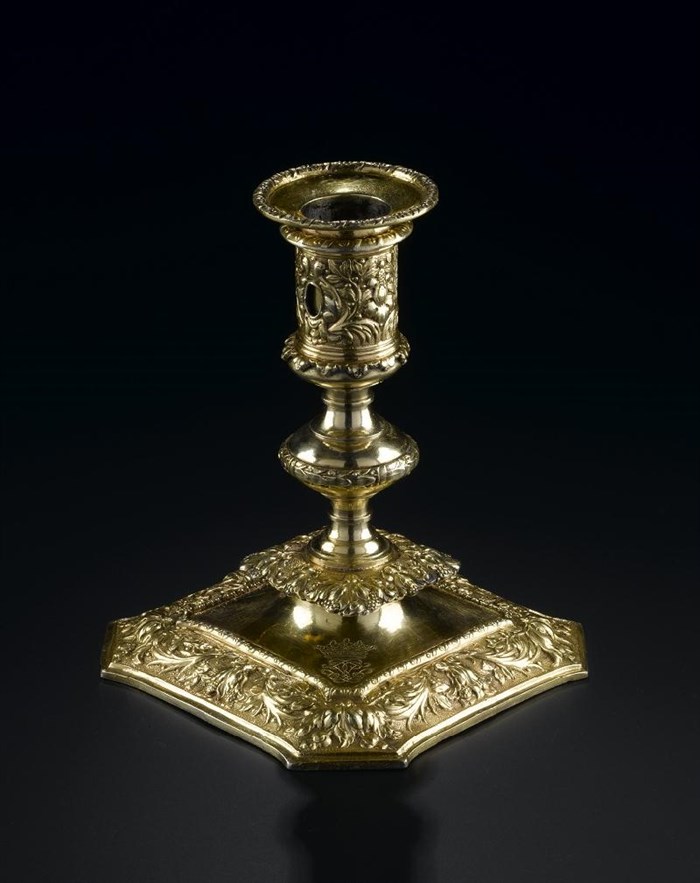 Above: Candlestick from the service made by goldsmith Pierre Masse.

The other items in the Lennoxlove service are examples of a popular Parisian model or line, rather than a group of specially designed and produced pieces. We can establish this from the warden’s date-letter marks that are struck on their bases and sides. They reveal that the mirror dates from 1652-53, one of the large round boxes from 1653-54, the three salvers and pair of large caskets from 1666-67, and the box with the pin cushion from either 1664-65 or 1668-69. Thus we can see that the Lennoxlove toilet service was a stock line, which was available, almost off the shelf, for over a decade. The popularity of the design is corroborated by an unmarked, almost identical service now in Toledo Museum of Art, Toledo, Ohio.

Interestingly, the maker of the 15 pieces in the main group is unknown. With the exception of the small brush, all these items are impressed with the maker’s mark ‘PF’, separated by a flame and below a crown and a fleur-de-lys, used by Pierre Fourfault. He was a humble Parisian goldsmith, with a chequered past, who specialized in making small boxes. In 1668 he was 72 years old and in trouble once again with the authorities for producing work using sub-standard silver. The current theory is that Fourfault was paid to lend his maker’s punch to another goldsmith or to a merchant, who had items made by others and then illegally marked them.

When was the service completed for Frances?

Most of the Lennoxlove pieces have separately made coronets and ciphers that are attached using threaded rods and screws or solder. They were evidently not made for Frances, but were subsequently ‘finished off’ for her. However, the ducal coronets and ciphers on the scent bottles are actually embossed and chased in the metal and were therefore definitely created for Frances. They are struck with the mark of the Parisian tax-farmer Vincent Fortier, which was used between September 1672 and October 1674; and it would seem – from the presence of the marks of the previous tax-farmer, Claude Thomas, on other pieces – that the entire service was completed for the Duchess of Richmond and Lennox during the second half of 1672.

Did the Lennoxlove toilet service have any impact when it arrived in Scotland?

Thirty years later, Frances’s impressive service passed to Walter Stewart and inspired the commissioning of another 17-piece toilet service for his sister, Marion, from the talented and prolific Edinburgh goldsmith Colin McKenzie. Struck with the Edinburgh date-letter for 1703-4, the new service was clearly made in connection with the wedding of Marion to James Stirling of Keir in February 1704. It is much less ornate, reflecting the increasingly fashionable, plain, bold Huguenot style and the more Presbyterian or Calvinist culture of Edinburgh. 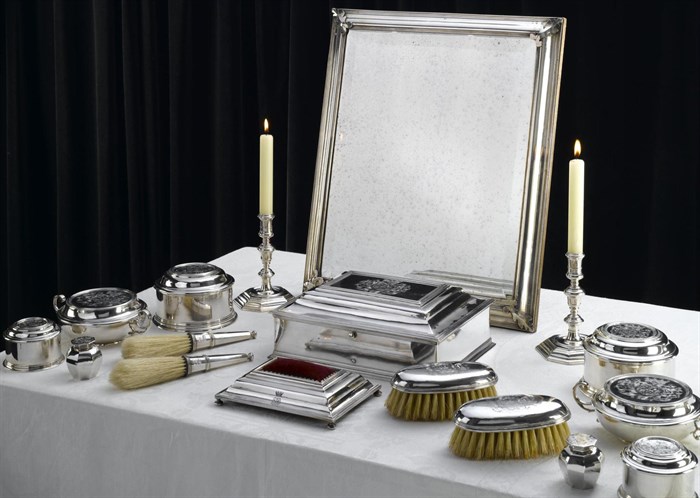 Above: The Keir toilet service.