Kaj Franck designed Morning in Athens in 1954, this piece remained in production until 1975.

This design was inspired by the sound of church bells, that Franck heard during a visit to Athens. 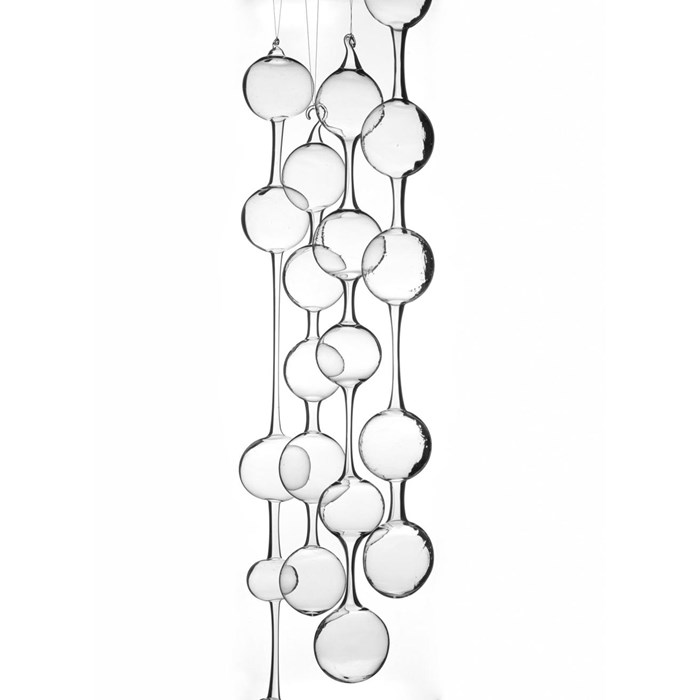 This design, along with some of his other popular creations, was reproduced in the 1990s to celebrate the 100th anniversary of Franck’s birth. The blown pendants are designed to hang where a breeze can catch them and make a soft melodic chime.

Who was Kaj Franck?

Kaj Gabriel Franck was born on November 9, 1911 in Vyborg, which now lies in modern day Russia.

Franck became one of Finland's most prolific designers, turning his talents to illustration, interior and textile design, homeware, kitchenware, as well as studio ceramics and glass. His experiences during the Second World War profoundly marked Franck. He developed democratic ideology, embracing modernist design, creating products that everyone could afford and enjoy.

Franck’s designs were intended to be functional, often with a multipurpose. Believing that there was no need to compromise on good design, he employed the same design ethic of practicality combined with beauty to everything he worked on. From those products intended for mass production, to exclusive one-off’s and limited edition art pieces.

Three of the most noted Modernist designers were Kaj Franck, Tapio Wirkkala and Timo Sarpaneva, who created innovative yet functional ‘Art Glass’ that was accessible to all.

They were part of a vanguard of Nordic designers experimenting with new techniques, for which they received international recognition for their unique approaches to glass design and production.

Franck's work has become internationally recognised for its simple forms consisting of the basic mathematical shapes such as spheres, cylinders, cubes and pyramids, combined with a bold use of color.

Franck's legacy continues with the Kaj Franck Award, Finland's most prestigious design recognition, and that his designs can be found in the majority of Finnish homes.

Nuutajärvi, is Finland’s oldest glassworks and was founded in 1793. Leading Finnish designers of the post-war years, such as Kaj Franck and Oiva Toikka helped make the glassworks widely known.

During the 1950s the highly influential La Triennale di Milano exhibitions in Milan brought Finnish design, particularly glass, to the fore. As a result, Finland became regarded as a leading exponent of Modernist design.