Capra is Picasso’s interpretation of a goat in glass sculpture, worked in clear and black glass. Created in 1954, this glass sculpture marked a new collaboration between Picasso, glassmaker Egidio Costantini and the famed Fucina degli Angeli in Murano, Italy.

Picasso created another artwork known as Capra – a goat cast in bronze. It stands 1.2m tall in the Museum of Modern Art, New York.

Created in 1954, this glass sculpture marked a new collaboration between Picasso and glassmaker Egidio Costantini. Inspired by Picasso’s original drawings, only seven were ever made for sale. 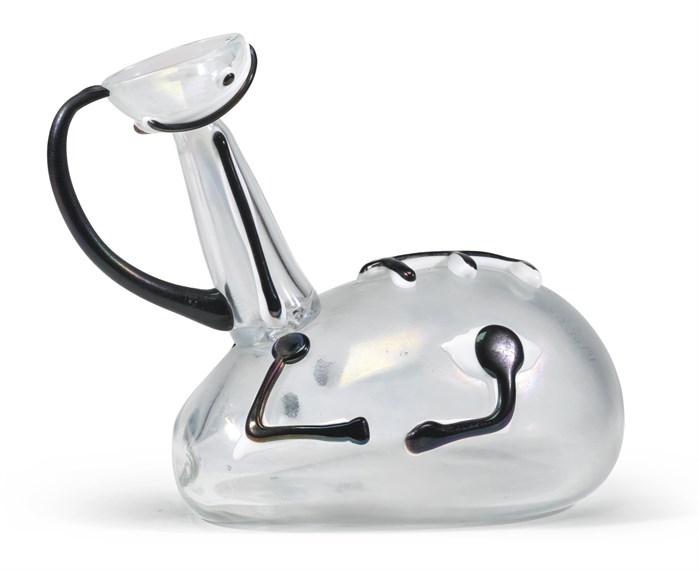 What am I looking at?

Capra is Picasso’s interpretation of a goat in glass sculpture, worked in clear, white and black glass.

Minimalist in style, small areas of black glass mark out the goat’s features – with its legs folded, our goat is sleeping on the ground. Unlike Picasso’s ceramic work, the luminous, reflective qualities of glass give his glass sculptures a certain depth and changeability. Capra transforms depending on the light and viewing angle, never quite the same colour twice.

This sculpture is an artist’s proof: an impression of an artwork taken while the artist is still working on a plate, woodblock or mould. Unsurprisingly, proofs are very rare. Typically they wouldn’t have been counted in a piece’s numbered run and artists rarely sold them afterwards.

I thought Picasso was a painter?

He was. But as one of the most influential artists of the 20th century, Picasso worked in many mediums; in addition to co-founding the Cubist movement, he also invented constructed sculpture and collage. This artistic flexibility meant Picasso created not only paintings, but hundreds of celebrated sculptures, prints, ceramics, poems and plays.

Here at National Museums Scotland, we display artwork by Picasso including glass, ceramics and jewellery.