Vivienne Westwood (b.1941), for her Time Machine collection (autumn/winter 1988)

Vivienne Westwood was made a Dame in 2006, for services to fashion.

I immediately fell in love with this green Harris Tweed suit when composing the exhibition ‘A Reir na h-Aimsir - Without Rain there would not be Magic’ at Museum nan Eilean, Sgoil Lionacleit. I am overwhelmingly proud that our indigenous Hebridean cloth has entered a global market and become a regular on catwalks all over the world.

The suit was designed by Dame Vivienne Westwood using the artisanal and historic Harris Tweed, which is wonderfully described in the Harris Tweed Act of 1993 as follows: 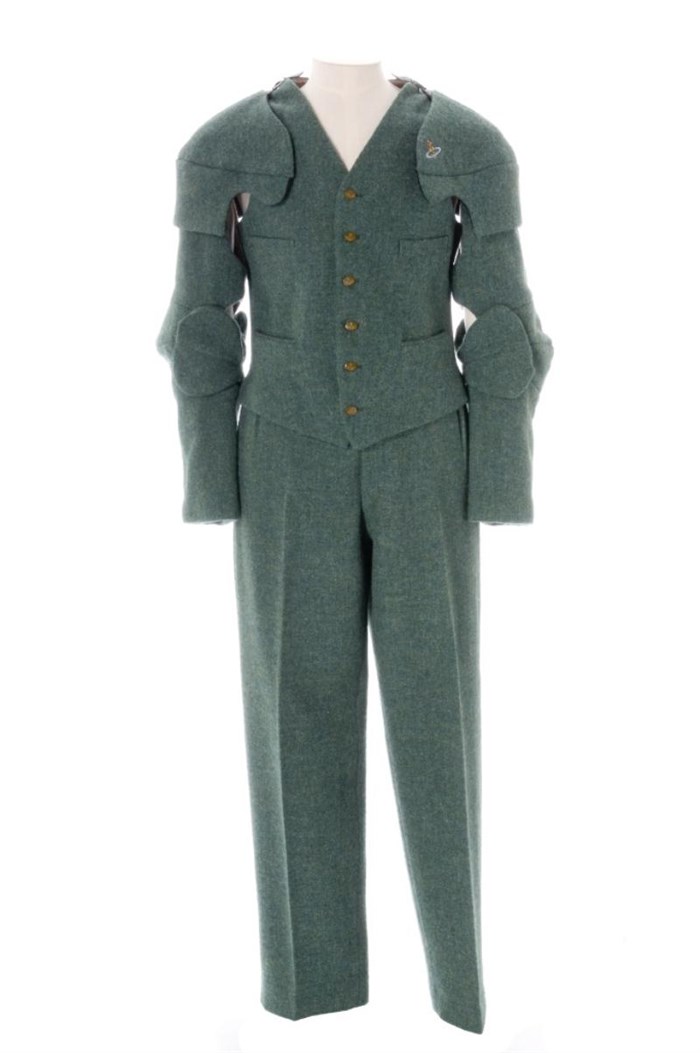 Dame Vivienne Westwood created this suit for her unique ‘Time Machine’ fashion collection, which was part of a larger collection entitled ‘Britain Must Go Pagan’. This eccentric and unusual album of fashion aimed to reconcile the traditional with classical and pagan themes to celebrate Britain during a period of economic trouble. Vivienne Westwood is known for challenging the fashion world with unusual and flamboyant fashion designs that incorporate tradition and heritage. Here, she combined medieval armour with the traditional gentleman’s suit to create the ultimate British suit. 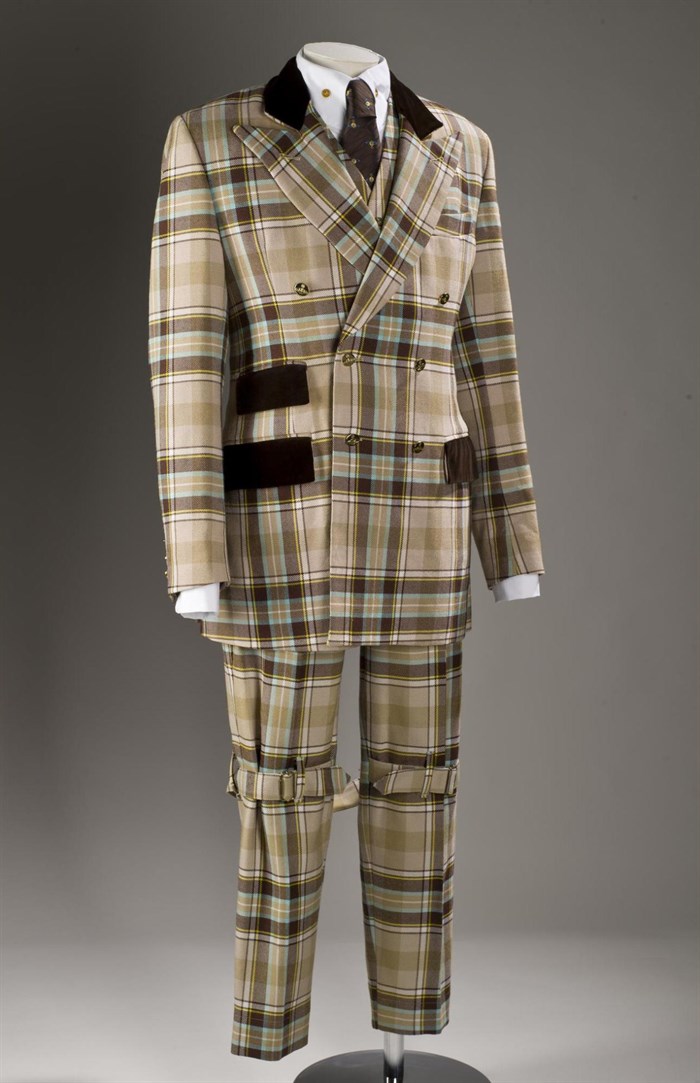 The suit cunningly has practical detachable sleeves which reflect the theme of medieval armour. This pragmatic design also echoes the properties of the tweed, as it too can adjust to the temperature, making it entirely appropriate for the exhibition at Museum nan Eilean. The weather in the Outer Hebrides is rebelliously beautiful but notoriously unpredictable so the islanders needed a practical material that could stand up to this climate. Clo Mor, as Harris Tweed is known in Gaelic, is perfect for the island climate as it retains heat in the winter but keeps cool in the warmer months. So as well as the prestigious artisanal quality, Harris Tweed is undeniably renowned for its practicality and longevity.

Royalty of the cloth world?

Since the ‘Britain Must Go Pagan’ collection revelled in mixing the traditional with the classical, Harris Tweed was a perfect material as it has heritage, history and British nature embedded within the beautiful threads. Harris Tweed originates from the Outer Hebrides and has influenced the lives of the island communities for centuries. Harris Tweed has always been processed in the homes and hands of the community and the high quality was recognised by nobility across the Highlands. Rejecting the technology that sparked from the Industrial Revolution, islanders continued to use traditional methods to create the famous cloth. As a result, Harris was less affected by the Highland clearances than some of the other islands. Thereafter domestic consumption of tweed dramatically increased and its prestigious name developed.

As the centuries went by the cloth became recognised for its excellence and superiority in quality, and in 1993 an Act of Parliament was passed to protect it. The Act certifies that Harris Tweed had to be identified by the Orb symbol, which ensures that it is genuine Harris Tweed exclusively handwoven in Harris. By safeguarding its quality, Harris Tweed has become a global brand and now ships to over 50 countries across the world.

Vivienne Westwood summed up the appeal of Harris Tweed when she described it as ‘the royalty of the cloth world’. Harris Tweed has also been the cloth of choice in the collections of Hugo Boss, Paul Smith and Brooks Brothers as well as in several footwear brands, including Clarks and Nike. 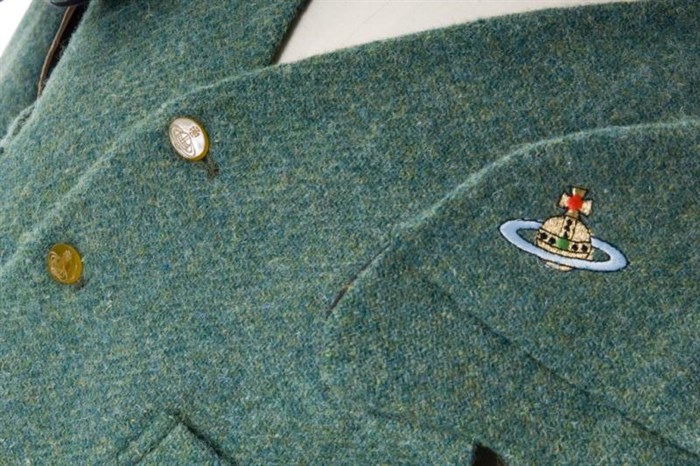 In the 21st century, you’ll rarely find an islander wearing Harris Tweed. But while it is obsolete for daily wear, many Hebridean women will own a handbag or purse made of the indigenous material, myself included. When I moved to the mainland and abroad to focus on my university education, I treasured my Harris Tweed purse as it was a piece of home in my pocket. It’s the mark of our homeland, reminding every islander that everyone can make their mark on the world if they try hard enough.