Portuguese traders first began to explore the west coast of Africa from the mid-15th century, sailing in search of a sea route to Asia and on the lookout for new trading opportunities. Their ships were loaded with brass, lead, iron, coral, cowrie shells, firearms and spirits, to be exchanged for enslaved Africans, gold, pepper, and ivory.

The ruler of Benin, the Oba, was a key trading partner for the Portuguese. He controlled the supply of goods and enslaved people to be traded with the Europeans and used the profits to support his court and government.

Although ivory carvings were traditionally made only for the Royal Court of Benin, the Oba granted permission for the production of decorated horns, spoons, forks and saltcellars for sale to European visitors. Why saltcellars? Salt was expensive in Europe at this time, presented in elaborate containers to grace the tables of the wealthy. Ivory was also a rare, high value material, demonstrating status, wealth and success.

Saltcellars were not part of the Benin carvers’ existing repertoire but expressly designed for the visiting Portuguese and combining Benin styles with European taste. This combination is reflected in their description as ‘Bini-Portuguese’ – ‘Bini’ being a reference to the culture of people living in and around Benin City.

The spherical shape of the saltcellars recalls the round-bottomed vessels commonly used across many parts of Africa, made from gourds, wood or pottery and the carvers also drew on their own cultural traditions for surface decoration, including basket weave and lozenge designs.

All known examples of Benin saltcellars feature Portuguese figures. The carvers probably had first-hand experience of their subjects and it is also possible that the Portuguese who commissioned the works supplied sketches of individuals that they wished to be included.

There are only 15 known examples of Bini-Portuguese saltcellars in museum collections, all of which were made in one court workshop by no more than seven or eight artists. Their journey from their origins in the kingdom of Benin is unknown. They may have been brought to Europe by Portuguese sailors or looted during the much later British Punitive Expedition in 1897. Find out more.

Two of the fifteen known saltcellars are in the collection at National Museums Scotland. One of these (A.1950.3) was purchased by the Museum in 1950 from a British antiquities and art dealer, for £200. It is stylistically similar to a saltcellar in the British Museum collections and may be by the same artist. The other (A.1956.115) is the central section of a three-part saltcellar (A.1956) which was transferred to the Museum in 1956 from the collections of the National Museum of Antiquaries of Scotland. 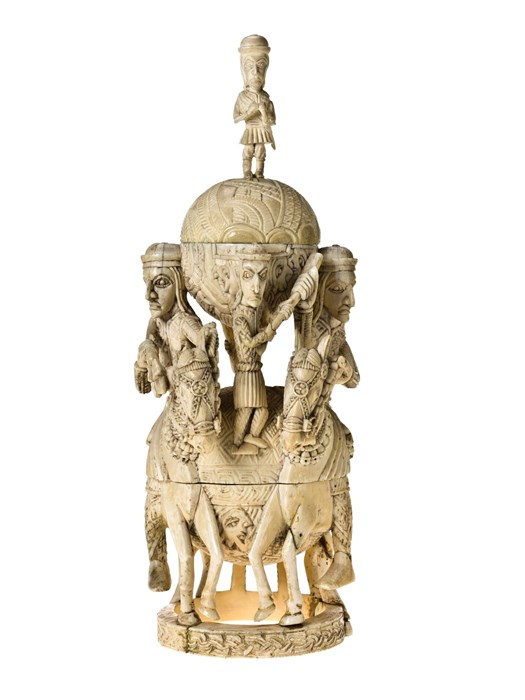 This section has been identified as the work of a carver known as ‘The Master of the Heraldic Ship’. The four carved standing figures, identifiable as Portuguese by their dress and regalia, each bear a striking resemblance to a 16th-century portrait of Afonso de Alburquerque, second Governor of the Indies, who sailed around the African coast to get to Asia. The carver has captured the details of his clothing, physiognomy and demeanour. Two more complete saltcellars by the same carver have been identified in the British Museum and the Metropolitan Museum of Art collections. 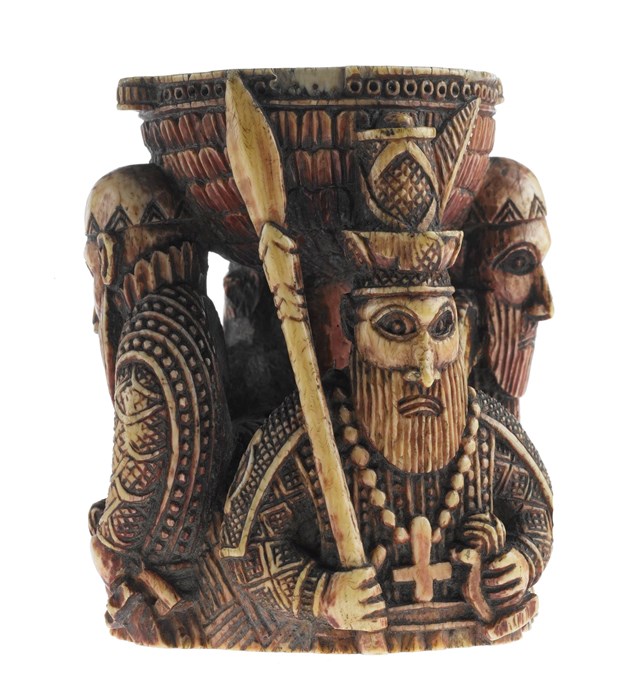 You can see a selection of Benin artworks on display in the Artistic Legacies gallery at the National Museum of Scotland.