If the first four-legged animals had never emerged from water onto land, our world today would not exist. Yet how did this great step happen? For decades, scientists didn’t know. Now, the mystery is finally being solved – and fossils discovered in Scotland lie at the heart of the story.

360-345 million years ago, Scotland was a very different place. Lying close to the Equator, the vegetated land was hot, humid and subject to droughts and flooding. It was in this setting that a major evolutionary event occurred: tetrapods (backboned animals with four limbs) invaded land. 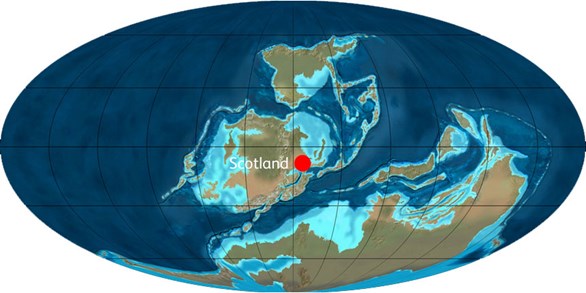 Above: The location of Scotland in the late Devonian period, 358 million years ago.

But, for many years, scientists had no idea how this had happened. There was a 15 million year ‘gap’ in the fossil record – no tetrapod fossils had been found dating from this missing time period, so there was no evidence to show how this giant step had taken place.

It was a Harvard professor, Alfred Sherwood Romer, who identified this hole in the fossil timeline, and so it became known by scientists as ‘Romer’s Gap.’ 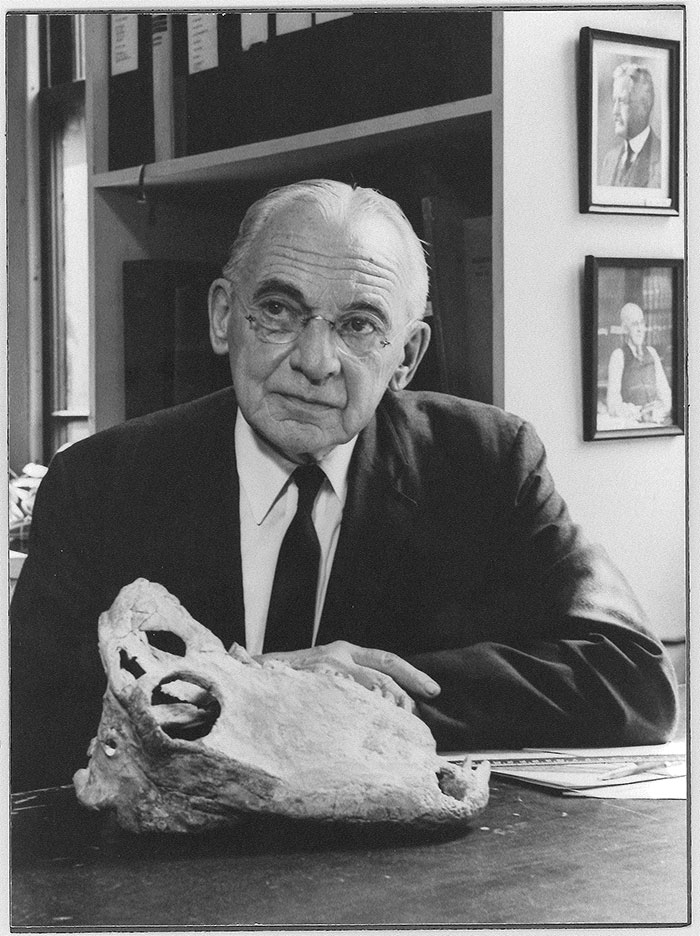 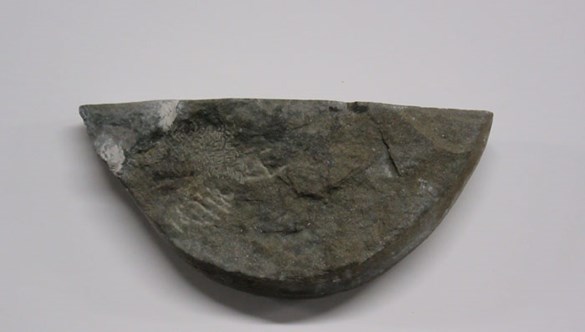 Above: This 425 million year old fossil millipede called Pneumodesmus newmani was discovered in Stonehaven in Aberdeenshire, Scotland, and is the earliest known land animal in the world. It has spiracles, tiny holes which would have allowed it to breathe air, thus proving that it lived on land.

Scotland has evidence of the first terrestrial ecosystem in the world, preserved in a bed of sediment called Rhynie Chert, in Aberdeenshire. This 410 million year old rock is made from silica (the same material as glass), and was formed from hot volcanic springs. It contains plants with beautifully preserved cells, primitive spiders and the oldest known fossil insects. A fungus was also living at that time that grew up to 9m tall!

Yet there was no evidence of tetrapod life on land. 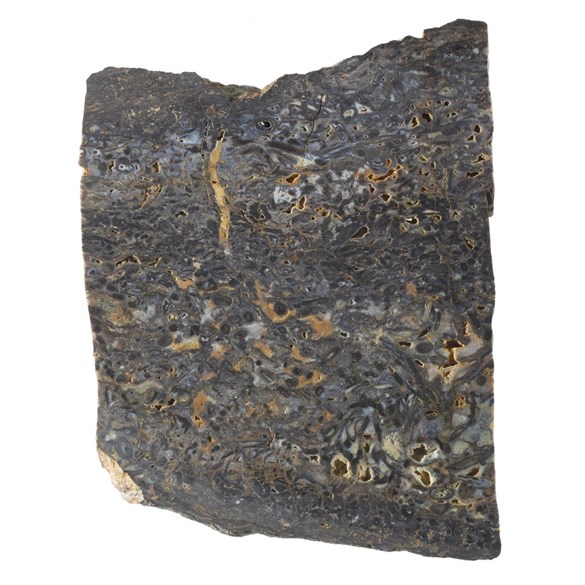 Above: The best way to see the plants preserved in Rhynie Chert is to cut and polish it. This slice shows the stems of plants. 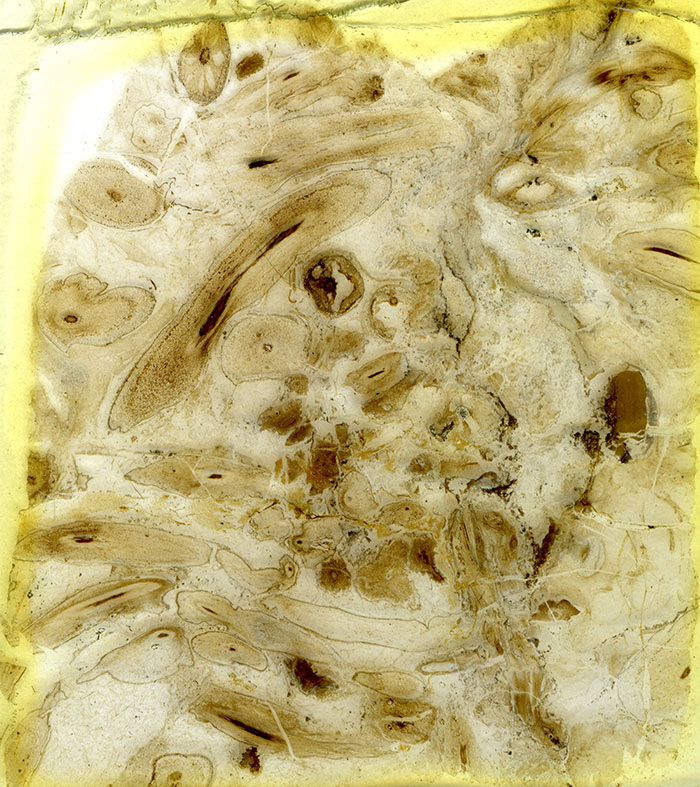 There were, however, tetrapods living in the water. Fossils show that they had four limbs, and looked as though they should be equipped for life on land. However, the limbs of these animals were not adapted to support them out of water. Their feet had as many as eight toes, and scientists now believe they used their legs to crawl along lake and river beds.

But how did these ‘fish-with-legs’ become adapted to life on land during Romer’s Gap?

Fast forward past the Gap, and there is ample evidence of tetrapod life on land. The earliest tetrapod fossils found after Romer’s Gap show that amphibians were now well adapted to walking on land. These new animals had long, slender limb bones and had evolved the ability to breathe on land. They also had no more than five toes on their feet - a basic foot pattern that has remained with every form of tetrapod since, from reptiles to humans.

Some of the best-preserved fossils of these animals were found in Scotland, particularly at the East Kirkton Quarry in West Lothian. 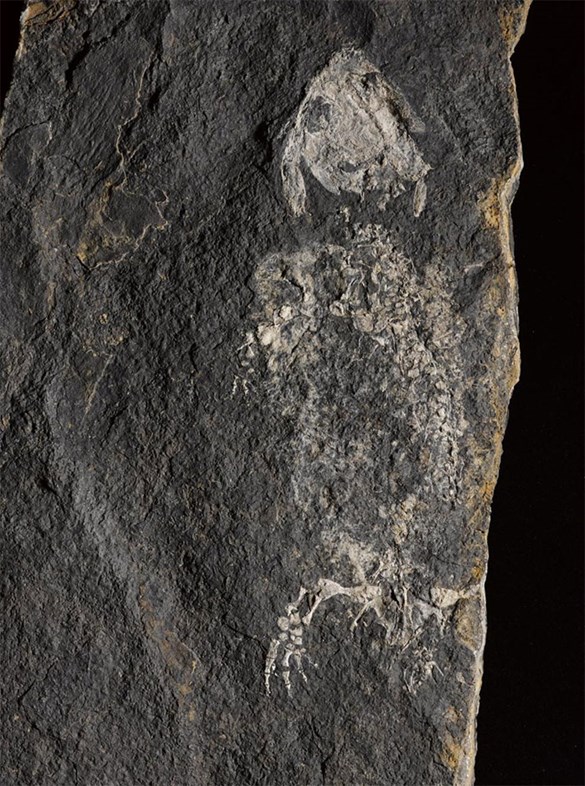 Above: Fossil of Balanerpeton woodi, found in East Kirkton Quarry. This typical post-Gap tetrapod has five toes, and could walk on land.

Above: Reconstruction of Balanerpeton woodi by Karen Carr.

But how had the pre-Gap water-dwellers evolved into these almost reptile-like land lubbers? Without fossil evidence from the Romer’s Gap period, nobody knew.

Scientists had been searching for answers to the Gap mystery since it was first identified in the 1950s. Some scientists believed that oxygen levels were too low for tetrapods to survive on land, so they simply hadn’t existed. Stan Wood, a self-taught Scottish field palaeontologist, was not so sure. 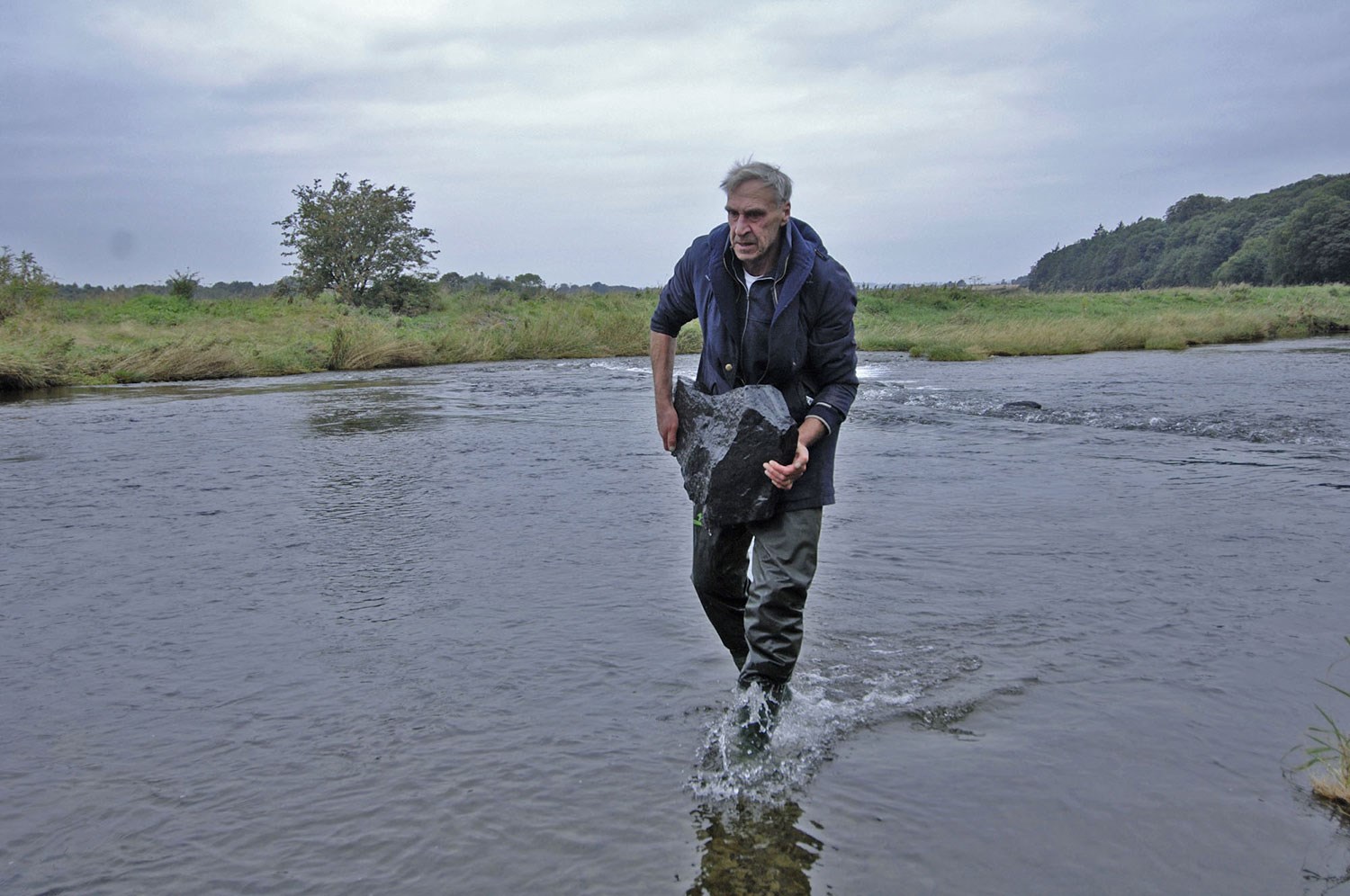 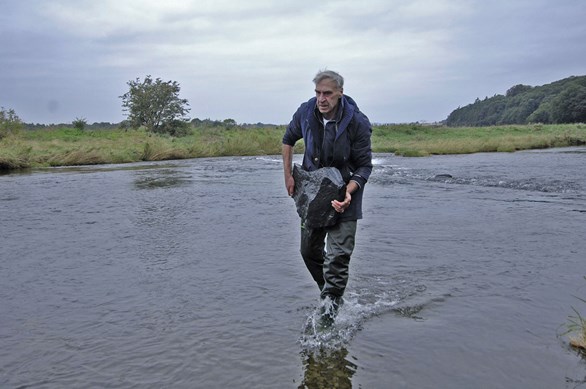 Above: Stan Wood working at Chirnside in 2009. Image © Maggie Wood.

Stan had found many important fossil-bearing sites during five decades of searching, including the site at East Kirkton Quarry where the earliest post-Gap tetrapods were discovered.

His friend and colleague, Tim Smithson, had found tantalising yet incomplete evidence that tetrapod fossils were to be found in the Scottish Borders. Armed with this knowledge, Stan and Tim began investigating outcrops of rocks at several sites across the Scottish Borders. These sites, especially Willie’s Hole at Chirnside, contained a diverse range of fossils, from fishes and scorpions to millipedes and plants. Eventually, Stan and Tim discovered tetrapod fossils dating from within Romer’s Gap. Part of the missing chapter had been found.

Spurred on by Stan’s discoveries, scientists went to excavate the site at Willie’s Hole, hoping to find more evidence of tetrapod life on land. What they found was truly amazing.

Buried within the river bed were remarkably complete fossils of animal bones, surrounded by fossilised plants and arthropods such as millipedes and scorpions. Such a complete ecosystem, alongside unique evidence of early land-based tetrapods, had never been seen before. 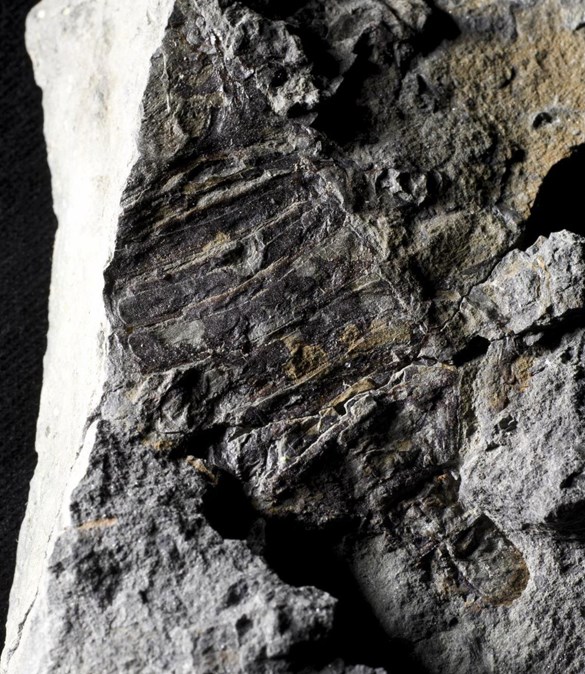 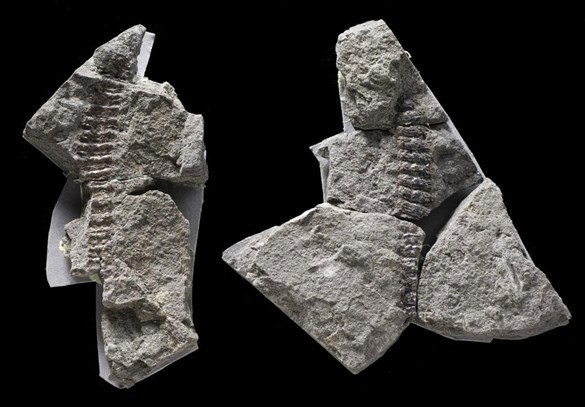 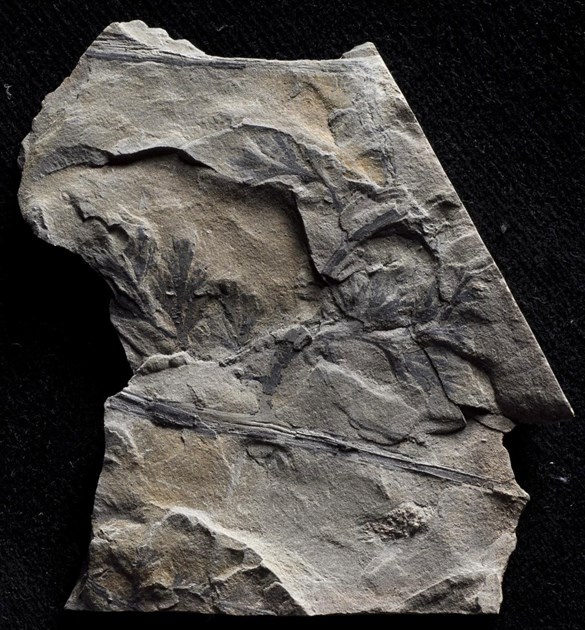 These fossils allow scientists to piece together the world and environment of the early amphibians, and give us important clues about the mystery of the tetrapod journey from water to land.

The Romer’s Gap tetrapods found in the Scottish Borders are extremely diverse. A wide range of body sizes have been discovered, including large tetrapods such as ‘Ribbo’ below, confirming that oxygen levels can‘t have been too low to restrict growth.

Many of the fossils found show that key adaptations were already becoming similar to those of the tetrapods living after Romer’s Gap. These include changes in limb structure, and well-developed lungs for breathing out of water. Such adaptations would have allowed these tetrapods to walk on land. However, detailed study has suggested that their legs were probably still too weak to allow them to walk without their body being in full contact with the ground. 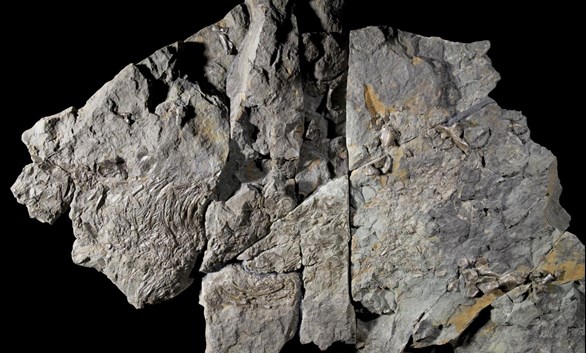 Above: This tetrapod, affectionately named ‘Ribbo’ because of the large number of prominent ribs, was found at Willie’s Hole. These ribs show that Ribbo’s lungs were well supported out of the water.

Above: Drawing of Ribbo by Karen Carr.

Many of the Romer’s Gap fossils were discovered during a major research project funded by the Natural Environment Research Council (NERC). This project has been running since 2012 and, taking Stan Wood and Tim Smithson’s discoveries as a starting point, aims to discover more about life during Romer’s Gap. A group of leading experts from across the UK, including scientists from National Museums Scotland, are running the project.

In the summer of 2015, scientists from National Museums Scotland completed a major excavation at Willie’s Hole. This excavation was unusual because the fossil-bearing rocks were located in a river bed and covered by fast flowing water. The river had to be diverted to allow the scientists to remove the fossils from the bedrock.

In this film, scientists involved in the project explain how the fossils were excavated and what they mean for our understanding of live on earth.

Fossils cannot be understood without placing them in the context of their age and environment. Clues about these can be pieced together from the sediments in which they were found. Scientists are able to extract fossil pollen and spores, which can indicate the age of the rock and reveal what kind of plants were present at the time. Structures in the rock, such as cracks caused by drought and traces of roots, can provide information about ancient environments, and chemical analyses allow scientists to learn about ancient climates.

Traditionally, fossils in rock could not be properly studied without exposing them using either mechanical tools or acid. These highly skilled processes are usually slow and difficult, and may damage the fossil or leave it in a fragile state.

A newer way to observe hidden fossils has radically altered this process. The use of X-Ray CT scanning allows scientists to scan the fossil before creating a digital model, which can then be enlarged and printed on a 3D printer. This technique was used by the NERC team to study the Romer's Gap fossils.

Fossils found in Scotland are beginning to answer many of the questions originally posed by the mystery of Romer's Gap. However, there is still more of this fascinating story of evolution to uncover and the research continues. As Romer's Gap closes, a new gap in our knowledge opens, as we still do not fully understand why tetrapods evolved the ability to walk and breathe on land.

Full independence from water came when one branch of tetrapods evolved waterproof skins and eggs that could hatch on land. These were the first amniotes, the next stage in tetrapod evolution.

Westlothiana lizziae was one of the fossils discovered by Stan Wood at East Kirkton Quarry in West Lothian. ‘Lizzie’ may be the oldest known amniote in the world, dating from 345 million years ago, and is on the the cusp of becoming one of the earliest reptiles. 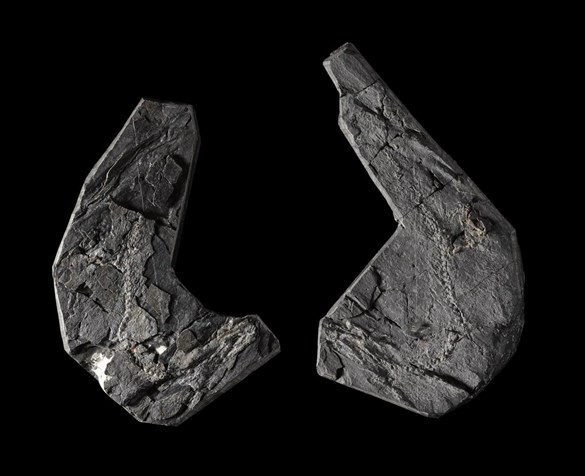 Above: Fossil remains of Westlothiana Lizziae. You can see ‘Lizzie’ in the Beginnings gallery in the National Museum of Scotland.

Will Scotland’s rocks reveal the next stage in the evolution of life on land?