Harvesting machinery of the 20th century

At the National Museum of Rural Life, East Kilbride we have a significant collection of 20th-century harvesting machines in our large machinery store. There are examples of machines used in the different aspects of harvesting from combines, threshing and baling machines.

First they had to cut down the plants with a long-handled cutting tool such as a scythe. Next, they had to carry out threshing, separating the edible grain from the inedible chaff by beating the cut stalks. Finally, they had to clean any remaining debris away from the seeds to make them suitable for use in a mill. It was both time consuming and labour intensive.

In 1826 in Scotland, the inventor Reverend Patrick Bell designed a reaper machine, which used the scissors principle of plant cutting – a principle that is still used today. 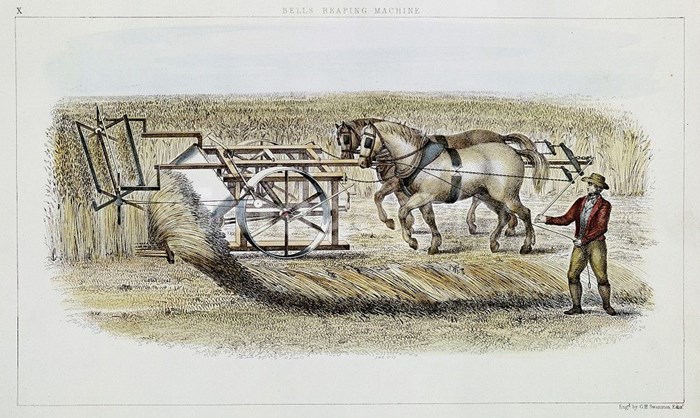 Modern combine harvesters do the whole job automatically: you simply drive them through a field of crops and they cut, thresh, and clean the grains all by themselves using rotating blades, wheels, sieves, and elevators. The grain collects in a tank inside the combine harvester, while the chaff spurts from a big exit pipe at the back and falls back down onto the field.

1600 model 38s were manufactured, of which 14 were exported. It was suited to work with short straw crops on the large prairies in USA but needed a team of 40 horses to pull it! However, the machine was not suited to the agricultural terrain in Europe.

The importer in Britain at the time, a company called Clayton Shuttleworth, looked into the problem and developed their own harvester in response.

The first European-built combine harvester was made by Clayton Shuttleworth in 1931. It has a wider drum suited to European crops and ground conditions. It is a trailed combine, pulled by a tractor rather than self-propelled.

Our Clayton Shuttleworth model was one of the first successful combine harvesters in Scotland.  It was transported by train to Dunbar and then pulled to Whittinghame Mains or Traprain Law, where it worked most of the time. It was purchased for £580 at the time. It started life as a ‘bagger’: the thrashed crop was fed into sacks which were then tossed on the ground to be uplifted later. It was converted to a bulk tank in 1958 and last used in the mid-1960s.

During the Second World War it was painted in camouflage livery and was subsequently nicknamed ‘Jessie’. This could have been in memory of Jessie, a local girl for whom the town clock of East Linton is known, but this is not proven.

The MDB (Maedrescher-binder) was developed by August Claas and Walter Brenner. It was created to handle European crops, where straw was a valuable by-product of the cereal harvest. The CLAAS combine harvester, with the mower-thresher-binder (MDB), was specifically designed and built for European harvesting conditions.

The crop then passed through two cleaning phases before the grain was put into sacks and the straw tied into bunches. The MDB entered production in 1937 and production ceased in 1943 due to the Second World War.

Our combine was brought by Mr J Sword of Irvine, Ayrshire, and used on his farm until the early 1950s. In the 1980s it came into the ownership of Mr H Ritchie, who later donated it to the collection, where it was subsequently restored.

The CLAAS Super is recognised as the ‘VW Beetle’ of combine harvesters. It was first sold in 1954 and was a development of the Super, which had been in production between 1949 and 1954.

The MDB with its cross-flow principle soon reached the limits of its performance. The CLAAS Super introduced a system, in which grain is threshed in the cross-flow and delivered from one end of the machine to the other.

The Super combine harvester, with its revolutionary lightweight construction, was continually revised and enhanced. The machine was equipped with ground hydraulic control, which enabled the vehicle operator to control the basic settings of the combine harvester using a hydraulic spool valve on the tractor. Our Super 500 harvester was used exclusively in East Lothian.

The Massey Harris 726 was the first self-propelled combine to be produced in Europe. A number of trailed combines had been developed prior to this by European manufacturers, the Clayton Shuttleworth (built in 1928) and CLAAS MDB (built in 1937).

The 726 cutting head is narrow by modern standards, measuring only 2.6 metres. The machine was available with either an Austin or Morris engine. This example is powered by an Austin 6 cylinder, 4 litre petrol engine.

McCormick was of Scottish/Irish descendants. He emigrated to the USA and built up one of the world's most famous agricultural engineering companies. The travelling threshing mill was the ultimate development of the mobile threshing mill.

It was operated by two people. The person on the stack threw the sheaves onto the elevator. The knives then cut the strings on the sheaves before it went into the drum. The second person took the grain off in sacks. The mill was last used in 1964 on Plains Farm in Perthshire.

This machine was hitched off-centre to a trailer that was pulled by a tractor. The driver had to guide the trailer alongside the bales in the field, far enough away to allow them to be picked up with the machine's clamping fingers. If any bale was off-set it could not be picked up.

The wheels on the bale lifter drove the fingers which picked up the bale and passed it on, in the direction of travel, up to the landing platform, where the workers built the bales up on the trailer.  This was a highly skilled task as all the bales had to interlock or they would dislodge and fall off on the way back to the stack-yard.

Such machines were all part of the experimental process of labour-saving devices that were being developed. Massey Harris bale lifters were not widely used on small farms, though they proved popular on larger farms.

Derry Baird, a contract mill man who worked in the Lothians, owned this van at one time. The chassis is possibly from an old ambulance whilst the body dates from around 1900. The van has been fitted with axles and wheels from a Bedford lorry

Mill vans were used to house the mill workers who would travel from farm to farm after doing the threshing. They could be away from home threshing for up to three months at a time or travelling every day.

The van can accommodate three people, two in the bottom bed and one in the top. Cooking and heating facilities were provided by the coal stove. 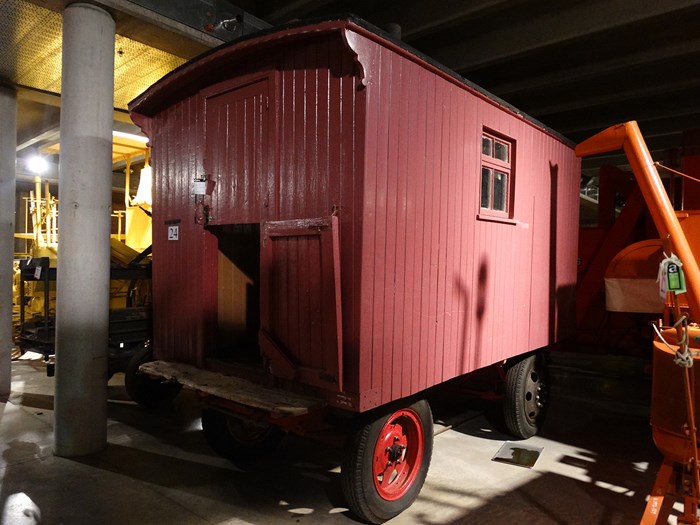