A masterpiece of early medieval art, this silver brooch-pin decorated with gold, amber and glass was found buried within a Viking grave in Orkney.

Not currently on display

The brooch-pin may have been a hundred or more years old before it was deposited in a grave. 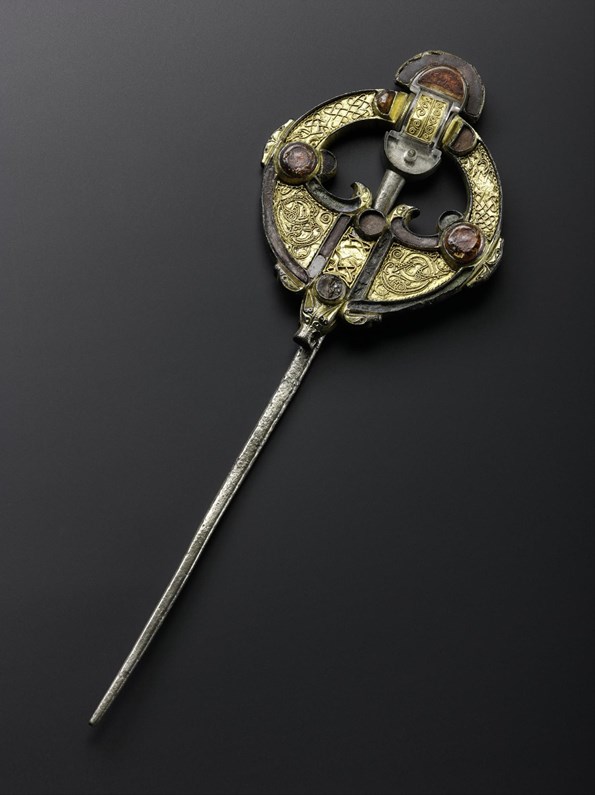 The Westness brooch-pin is one of the real treasures of the National Collection. It is an ornate dress-fastener and 'by far the most elaborate brooch-pin that has survived'. Its decoration is a fusion, combining styles and craft techniques from across Britain and Ireland. For complexity of ornament and craft, its closest parallel is the Hunterston Brooch. 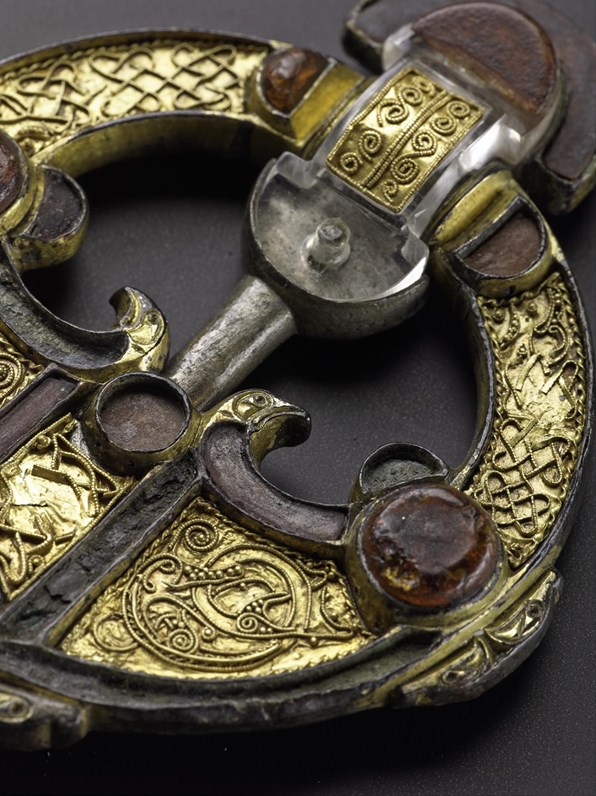 The brooch-pin showcases the intricacy that 8th-century metalworkers could achieve. The biting beasts and interlaced fish-tailed creatures on the hoop and terminals are made of incredibly fine-gauge gold beaded wire in a technique known as filigree, that was probably introduced to Britain and Ireland by Anglo-Saxon craftspeople. The large studs are made of amber, which may have come from as far as the Baltic, and the narrower insets were made of red glass, probably imitating the thin slabs of garnet used on contemporary Anglo-Saxon metalwork. This fusion of styles and materials is known as Insular art. 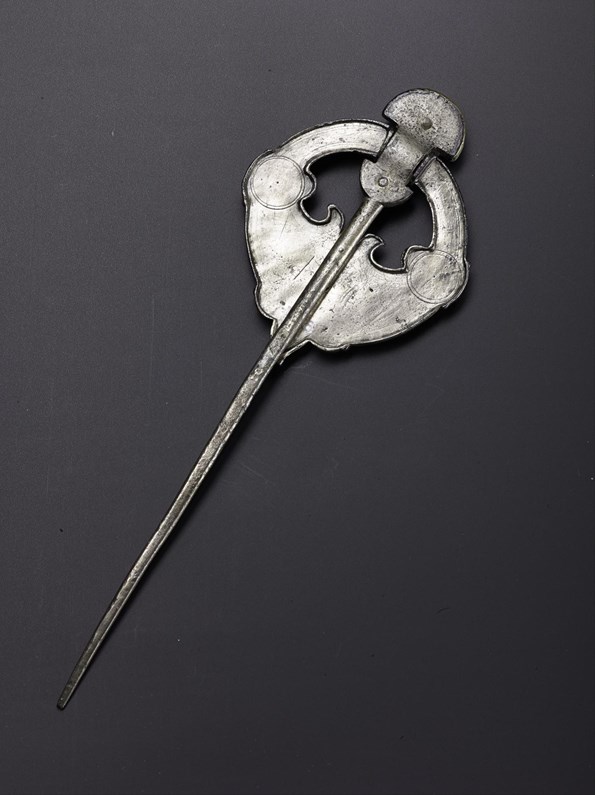 Above: The reverse of the Westness brooch-pin.

The reverse of the brooch-pin’s ring shows that it was made of solid silver, like many of the surviving brooches from early medieval Scotland, including those from Hunterston and the St Ninian’s Isle Hoard from Shetland. The gold decoration on the front is only a very thin layer of gilding, with applied gold filigree ornament, but means it was likely made for a royal patron. The creatures inhabiting the hoop also have their own religious significance, which may only have been appreciated by those trained in Christian theology.

How was the brooch worn? 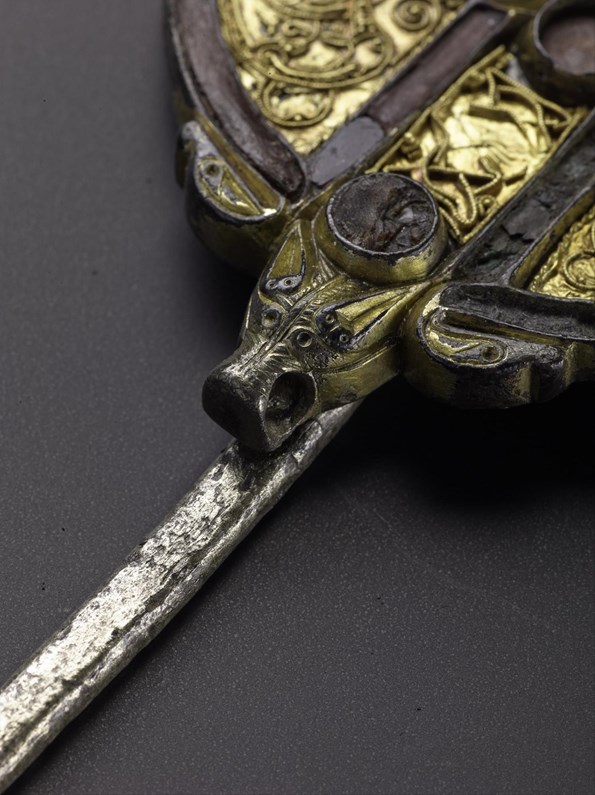 Brooch-pins like these are a product of changing fashions in the 8th century. Horseshoe-shaped or penannular brooches had been the most popular dress-fastener among the elite for hundreds of years. These brooches had a pin which could move around the hoop, effectively locking both the brooch and clothing in place. In time, fashions changed: the pin was made longer and the brooch hoop became just a decorative ring at the top, a place to add more decoration rather than a functional feature. The Westness brooch-pin has what looks like a miniaturised Hunterston Brooch placed at the head of a pin. This is why it has a projecting beast-head beneath the hoop terminals, its mouth used to grip a chain or cord, now lost, which would have attached to the pin.

The Westness brooch was a product of changing fashions during the 8th century, but was found with the body of a woman buried around a hundred years later in a Viking-style cemetery. Thanks to careful excavation, we know that the brooch-pin’s missing studs were already lost by the time it was placed in the grave. This suggests that it was a precious heirloom, probably passed down through generations. Similarly, the Hunterston Brooch had Norse runes carved onto its back some 200 years after it was made, showing it was still a cared-for possession.

Silver-gilt treasures like these were more than just pretty jewellery in the early medieval period; they acquired life-stories of their own which we can try to reconstruct today.

A tragic death, and a lucky find

Above: Map showing where the pin was discovered, in Westness, Rousay, Orkney.

The Westness brooch-pin was discovered by accident when a farmer was burying a dead cow in 1963. It was only recognised after it had been dug out of the soil, in the spoil heap! When the archaeologist arrived, she discovered a disturbed grave in a stone chamber: an elite, Scandinavian-style female burial from the first generation of Viking migrants to Orkney in the early 9th century. This remains the richest female Viking-age burial yet discovered in Scotland, in terms of the amount of grave goods and the range of material (including items of gold, silver, bronze, glass, iron, antler and textile). 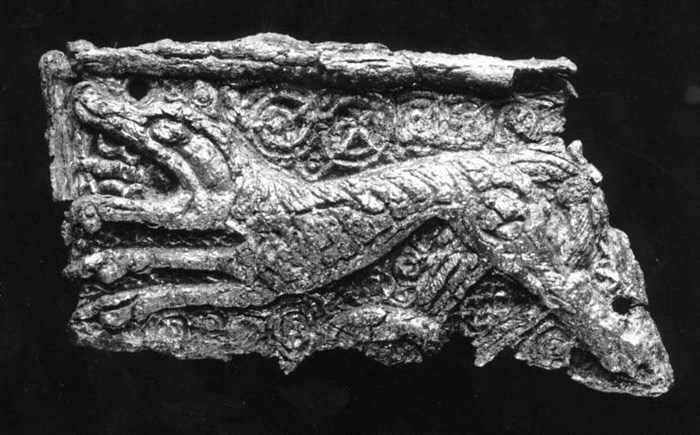 Above: The Westness ‘wolf’, found in the same grave as the brooch-pin, is a piece of a Christian reliquary chopped up and refashioned into a brooch.

But this grave also marked a tragic event. The woman herself was under 30 years old, and buried alongside her was the skeleton of a newborn infant – it is likely this was someone who had died in childbirth. The rich array of grave goods may have been as much from an outpouring of emotion from the mourners, as a measure of the woman’s wealth.

The remarkable Westness Viking cemetery also included boat-shaped graves containing Scandinavian warriors, some who died violent deaths, alongside men, women and children buried in the ‘local’ style with no grave goods and facing east. Westness appears to be one place in Orkney where the Viking settlers did not just replace the local inhabitants, but may have married into their communities. It shows that not everyone buried as a Viking need have come from Scandinavia, and that migrants were not always buried in the manner of their homelands. The Westness brooch-pin and other material from these graves shows the complex interplay between Christian, pagan, local and non-local identities that is so characteristic of the Viking Age in Scotland.