In 2013, National Museums Scotland acquired one metal sculpture and one work on paper by contemporary Australian artist Danie Mellor. Mellor’s works deal with the complex and shared histories of Europe and Australia and complement the existing collection of Australian Aboriginal material culture at the National Museum of Scotland.

In Dreams the Heart: metal; The Story Place (A History of Two Worlds): pastel, pencil, glitter Swarovski crystal and wash on paper

One of the Aboriginal figures in The Story Place (A History of Two Worlds) holds a long wooden sword-club, a number of which are in the collection of National Museums Scotland. Typically broad and flat in form and undecorated, such a sword-club would have been made of a tropical hardwood and wielded one-handed above the head to deflect rainforest shields in battle.

Above: Wooden sword-club with broad curved blade and handle covered with black gum.

Danie Mellor is of Aboriginal and European cultural heritage, including Scottish. Born in Mackay in northern Queensland, the artist is descended on his mother’s side from the Mamu and Ngagen peoples of the Atherton Tablelands in northern Queensland. Mellor trained in Fine Art in Canberra and Birmingham Institute of Art and Design and completed his doctorate at the Australian National University in 2004.

Mellor works across a variety of media, including ceramics, printmaking, sculpture, mixed media works on paper and object-based installation. Mellor’s heritage has shaped the focus of his art, which is characterised by its preoccupation with the historical intersections and relationships between indigenous and Western cultures.

Mellor has received numerous awards including the National Aboriginal & Torres Strait Islander Art Award in 2009, has been included in significant exhibitions in regional, state and national galleries and is represented in most permanent national, state and also private collections in Australia and overseas. National Museums Scotland is the first European institution to acquire Mellor’s work. 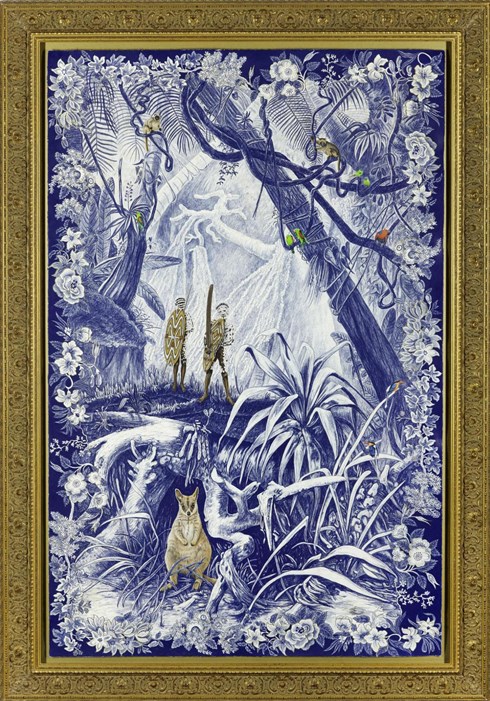 Above: The Story Place (A History of Two Worlds), pastel, pencil, Swarovski crystal and wash on paper: Australia, Danie Mellor.

The Story Place (A History of Two Worlds) features Mellor’s signature blue and white palette and ceramic transferware imagery found on Spode china. Mellor visited the Spode factory in Stroke-on-Trent a number of times in the mid-1990s and has been working with this blue and white palette since 2007. Using this particular visual language, Mellor creates an exoticised picture of the Australian rainforest which engages with multiple cultural perspectives and addresses the tensions between European understandings of Australia and Australia’s indigenous population.

Native animals and two Aboriginal figures decorated in ceremonial body paint holding shields and a wooden sword-club can be found in the transformed landscape. Mellor describes this as the landscape that remains Country, altered through the historical and ecological changes brought about by European settlement, yet remaining in cultural memory as a place and space of continuing significance 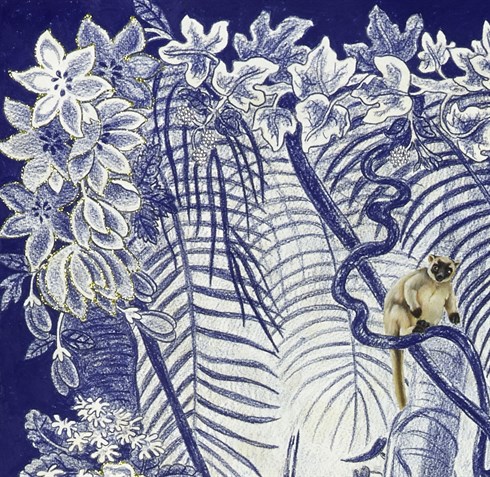 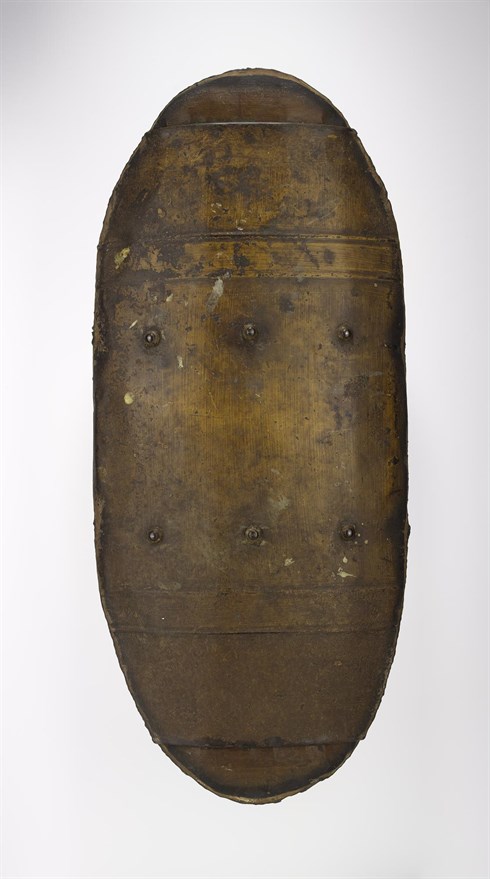 Above: Sculpture entitled In Dreams the Heart, in the form of a Queensland shield (balan bigin), made from the metal exterior of a European travelling trunk: Australia, Danie Mellor, 2008.

Described by Mellor as “an Indigenous object made with a postcolonial material”, In Dreams the Heart is made from the re-claimed steel of a Victorian travelling trunk. The sculpture takes the form of a rainforest shield or balan bigin traditionally sculpted from the buttress roots of a fig tree or ficus. Balan bigin are unique to Mellor’s mother’s Country, the Atherton Tablelands in Far North Queensland. Considered feminine objects among the Mamu/Ngagen peoples, the shields are in fact carved, decorated and used only by initiated men. Traditionally communicating the individual identity of the bearer and kinship ties, In Dreams the Heart specifically references Mellor’s matrilineal heritage – his great grandmother (May Kelly) and great-great grandmother (Eleanor Kelly). The age and patina of the metal and the ridges and studs on the shield surface allude not only to the Edwardian attire worn in the sepia-tone portrait photographs of Mellor’s Aboriginal ancestors but also to the natural pigments or ochre paint used traditionally for colour and to mark out clan and ceremonial designs. In Dreams the Heart is displayed opposite a number of traditional shields, one of which is also from Queensland and dates from the 19th century. 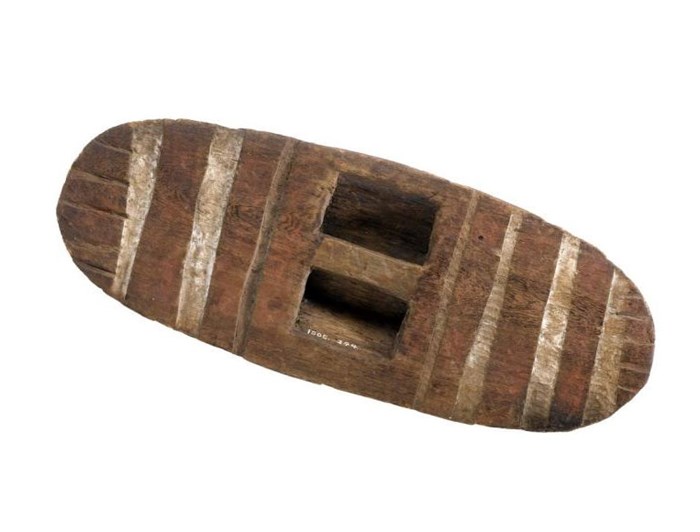 Above: Back view of shield, elliptical, with blackened and painted decoration: Australian, Queensland, 19th or 20th century. 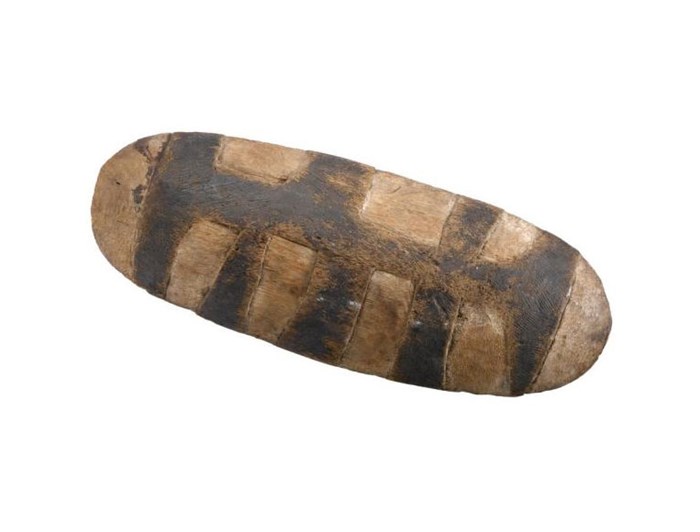 In memory of Brenda McGoff.

In Dreams the Heart and The Story Place (A History of Two Worlds) were purchased by the Museum and her husband Gordon as a lasting legacy and memorial for Brenda McGoff, who was an Assistant Curator in World Cultures. The works celebrate Brenda’s commitment to the museum and interest in the Australian collections and in particular, contemporary Aboriginal art.

In conversation with Danie Mellor

In the short film below, Danie Mellor discusses his sculptural shield series.