Benin head of a king

One of the highlights of our World Cultures African collections comes from the kingdom of Benin in Nigeria. This sophisticated bronze sculpture commemorates the sacred person of an Oba or King.

Our World Cultures collection includes over 80 objects from Benin.

The Kingdom of Benin

The Kingdom of Benin flourished from the 13th to 19th centuries in southwest Nigeria. Benin culture has long been the focus of attention in the Western world because of the remarkably sophisticated lost-wax bronze castings made by specialist craftsmen for the royal house, which played a variety of functions in court life and ritual.

When the slave trade ended in 1806, the British developed legitimate trading monopolies in Nigeria. The only area that hindered this monopoly was the kingdom of Benin, which remained independent and traded under control of the King, known as the Oba. After attempts to agree terms of trade in 1897, the British sent a military operation against Benin to depose the king through force, known as the British Punitive Expedition. The Oba was deposed and the accumulated works of art from many centuries which adorned the palace were all removed. Over 4,000 royal artworks were taken by the British, and then sold by the British Government to help recover the cost of the expedition. Objects of brass, ivory, coral and wood are now in collections worldwide.

Commemorative head of a king 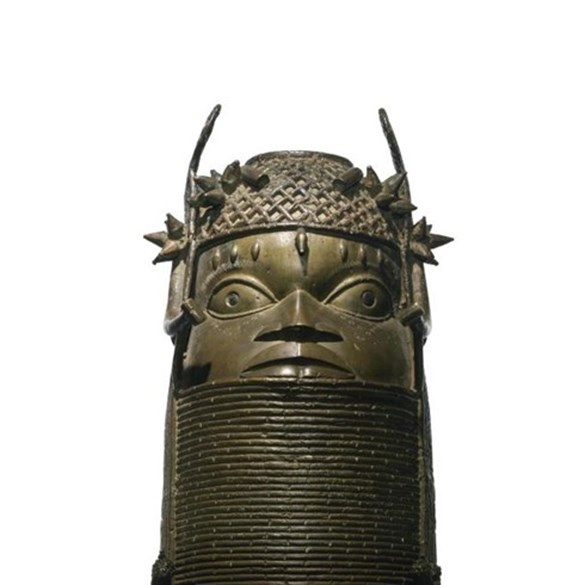 Above: Commemorative Head of a King, Benin, Nigeria

The museum bought this head in 1898. The sale of the head to the museum is mentioned in a note from Webster to another potential client in 1898. This is an important object, not only in the history of art in Benin, but also in colonial history.

Originally the head would have been found in the Royal Palace. Commemorative heads were placed on the altars inside the palace to honour the ancestors, the previous Kings or Obas.

The Oba was the highest political and religious authority. Before the crown prince became Oba he had to commission a bronze head of the deceased king and install an ancestral altar in his honour. Large ivory tusks richly carved with important events and accomplishments in the Oba’s life were displayed in the top of the head.

These heads served as powerful visual references to each ruler’s destiny, authority, wisdom and success and happiness, reflecting Benin associations of the head with knowledge, intelligence, character, judgment and family leadership. Royal ceremonies were performed each year to strengthen the Oba’s head.

Art historians have created a time line from c.1400 which distinguishes eight stylistic variations of head. The style of this head dates from between 1816 and 1896: this is apparent from the addition of horns, and because it is more embellished than earlier heads.

The base is decorated with royal symbols of leopard, mudfish, and the heads of sacrificial animals. The head is depicted wearing rows of coral beads around the neck and a coral bead head dress. Coral beads have been a symbol of kingship to the present.

How was the head made?

The method of lost-wax casting has been widely practised on the African continent for centuries. While it is difficult to establish how the method was developed or introduced to the region, it is clear that West African sculptors were casting brass with this method for several hundred years prior to the arrival of the first Portuguese explorers along the coast in 1484. 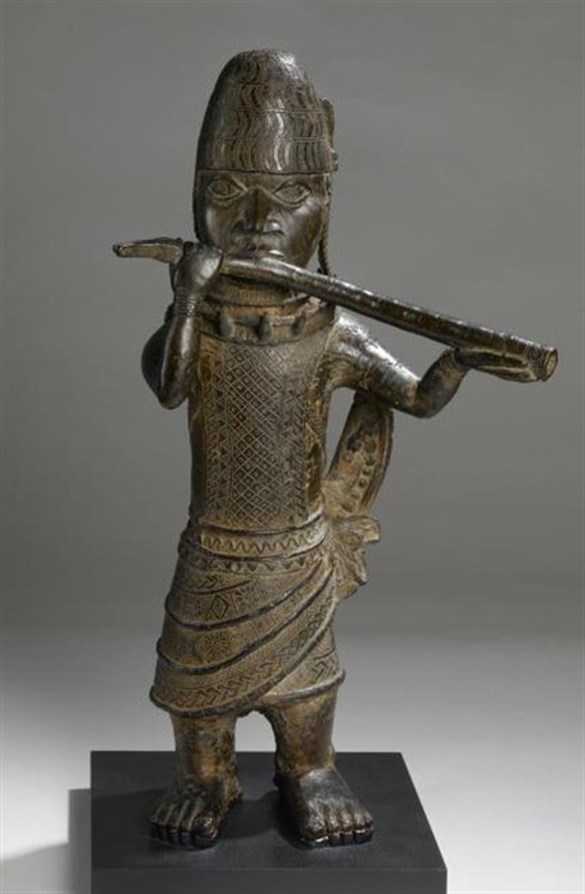 Above: 17th or 18th century cast brass figure of a court attendant playing an ivory horn and wearing a hat with feather, collar of leopard's teeth, decorated chest covering, and wrapper with elaborate upturned tie ornamented at the hip with a leopard mask, probably from the ancestral altars of the Oba within the palace courtyard. On display in the Artistic Legacies gallery at the National Museum of Scotland.

The process begins with beeswax, latex, or another material with a low melting point. It must be soft enough for carving fine details, but hard enough to retain its shape. After the wax object has been carved, increasingly coarse layers of clay are applied to the object and allowed to dry. The first and finest clay slips capture the wax details in the smooth mold, and the coarser clay layers provide strength. The entire assemblage is then fired, causing the original wax carving to melt away, leaving only a baked clay shell. Liquid metal is poured into the empty mold and left to cool and harden. Later, the clay exterior is broken open, revealing the finished metal object beneath. In direct lost-wax casting, the object produced is always unique, as the mold is necessarily destroyed as part of the casting process.

The technique requires a great deal of skill, involving extensive knowledge of both pottery and metalworking, and a careful attention to changing temperatures to prevent unwanted cracking or other damage to either the clay mold or to the metal sculpture during the casting process. Some of the earliest and most accomplished bronze works found in Africa date to the tenth century and are from a site called Igbo-Ukwu. Brass casting still continues in Benin today.

Our Benin collection consists of over eighty artworks, including bronze heads, bronze and ivory figurative sculpture, pendants and plaques. You can view may items from the collection in our Artistic Legacies gallery. See a selection in the slideshow below.

Today there is a sense of grievance regarding the Benin material. After the death in exile of the deposed Oba, his eldest son was allowed to return to Benin and the dynasty was restored. He became one of the most influential rulers in Nigeria. In his introduction to the Benin Kings and Rituals exhibition catalogue (2009) the current Oba made a subtle plea for the return of objects from his ancestral past.