Carved in the royal workshops of Benin, in West Africa, these late 16th-century ivory saltcellars are early examples of African souvenirs made for the European market. 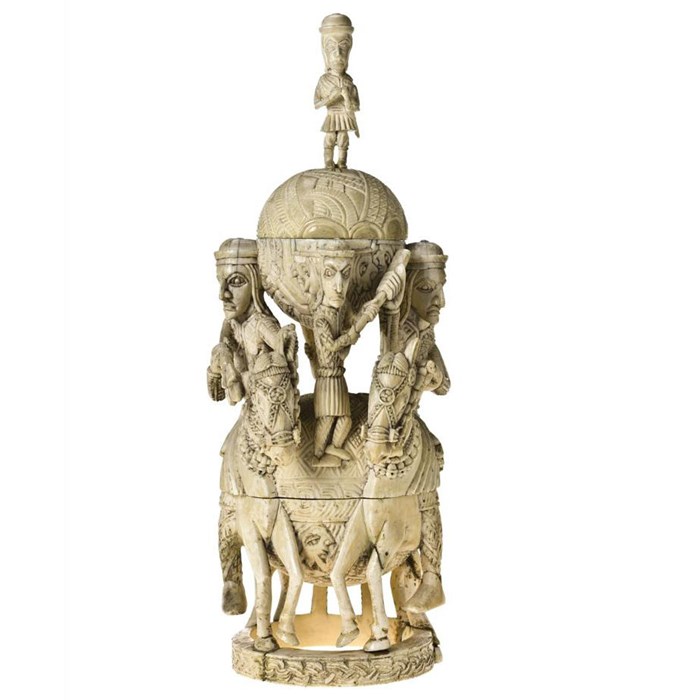 Above: Ivory saltcellar in three parts, carved with Portuguese horsemen and other figures. 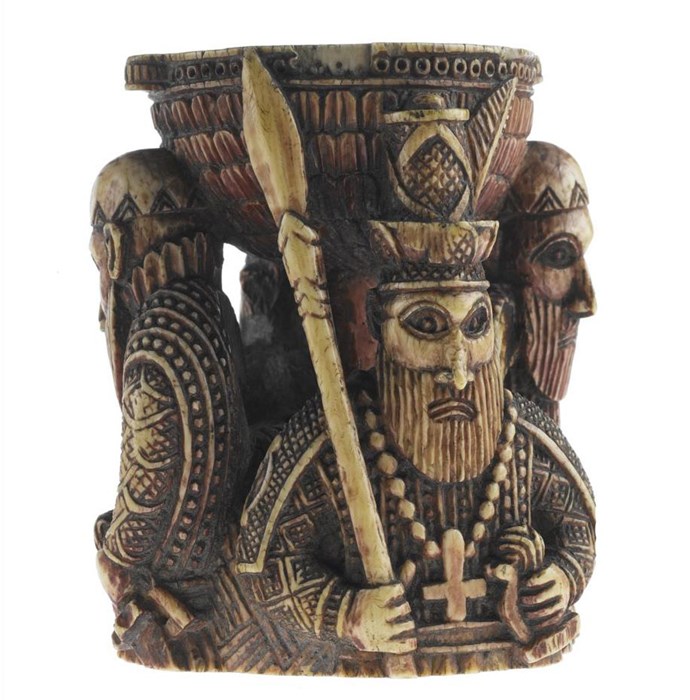 During the second half of the 15th century, journeys of exploration brought Portuguese navigators into direct contact with cultures of western Africa. In this initial period of contact, the cultural exchange that developed led to new forms of art which expressed the growing relationships between Africa and Europe. A range of these artworks are now in museum collections, including National Museums Scotland.

By the 16th century, Benin (in modern day Nigeria) was trading pepper, gum, cloth, ivory and slaves with the Portuguese in exchange for brass, lead, iron, coral, cowrie shells (used for currency), firearms, spirits and luxury goods. The Oba (king) of Benin controlled the supply of goods that could be traded to the Europeans on the coast, so that all the profit went to support his court and government. Other merchants could only trade with his permission.

The Oba also had a key role in controlling the ivory trade from Benin. He was entitled to a tusk of every elephant killed and his ivory deposit was legendary.

Since art was an important way of communicating his authority, the Oba also regulated the output of the palace workshops. Ivory carvings were traditionally produced only for the royal court, but the Oba granted permission for decorated saltcellars, horns, spoons and forks to be made for European visitors. These luxury goods are possibly the earliest examples from Africa of objects made specifically as souvenirs for foreigners. 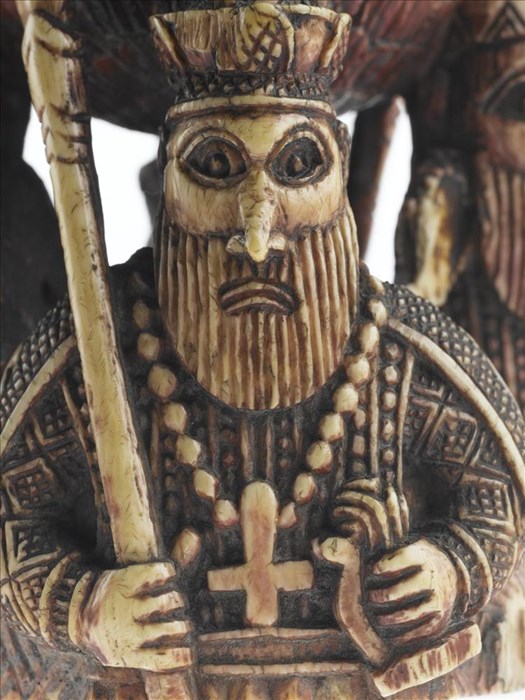 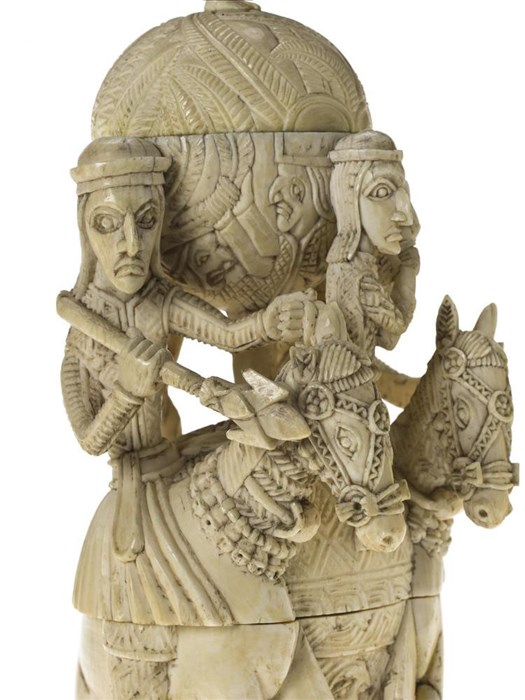 One of the most fascinating objects produced in Benin for the Portuguese, and one of the first African artefacts to be brought back to Europe, is the carved ivory saltcellar, a synthesis of both African and European style.

There are only fifteen known examples of Bini-Portuguese saltcellars in museum collections, created in one court workshop by no more than seven or eight artists.

This type of vessel was not part of the Benin carvers' existing repertoire, so why a saltcellar? Salt was expensive in Europe during this period, gracing the tables of European noblemen in elaborate containers. Likewise, ivory was rare, an exotic, high value material, demonstrating status, wealth and success.

All the known Bini-Portuguese saltcellars are spherical, recalling the round-bottomed gourd, pottery and wooden vessels made in all parts of Africa. The separation between lid and bowl at the mid-point is uncommon in European lidded containers of the period, which tend to have a chalice-shaped deep bowl and shallow lid.

All examples of Benin saltcellars also feature Portuguese figures. The Bini carvers probably had first-hand experience of their subjects, and it is also possible that the Portuguese commissioning the artworks supplied sketches of the subjects they wished to be included.

The lid of this saltcellar is not original, but was created in the Museum workshop in the 1950s.

How did this saltcellar come into the Museum collection? 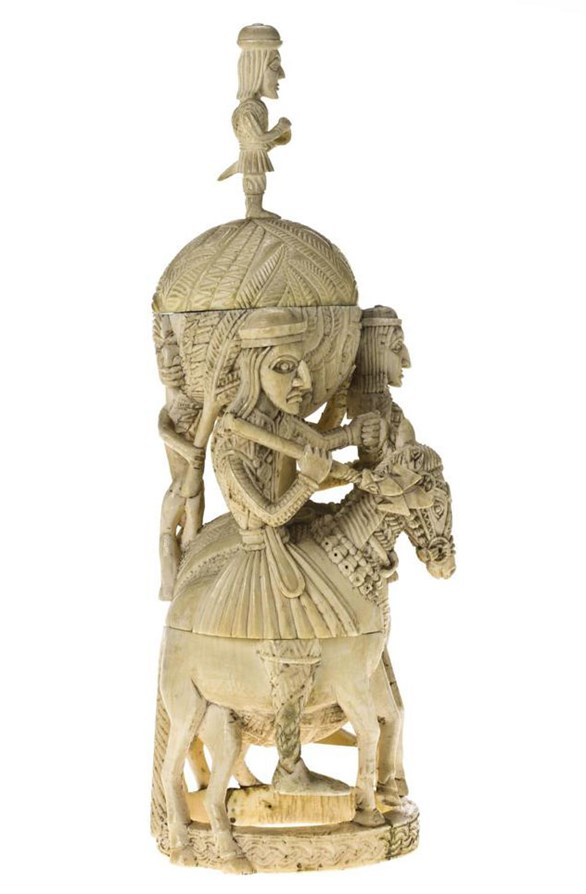 The journey of this saltcellar from its origins in Benin are unknown. The Museum register documents that it was purchased by the Museum in 1950, from the well-known London-based British antiquities and art dealer Mr Sydney Burney, as a two-part saltcellar, missing the lid, for £200 (c. £6,500 in 2017). There are a number of breaks and repairs in the ivory, and the Museum register notes that ‘the cover was restored conjecturally in the Museum workshop’. The saltcellar is stylistically similar to a saltcellar in the British Museum collections and is, according to specialists, by the same artist. 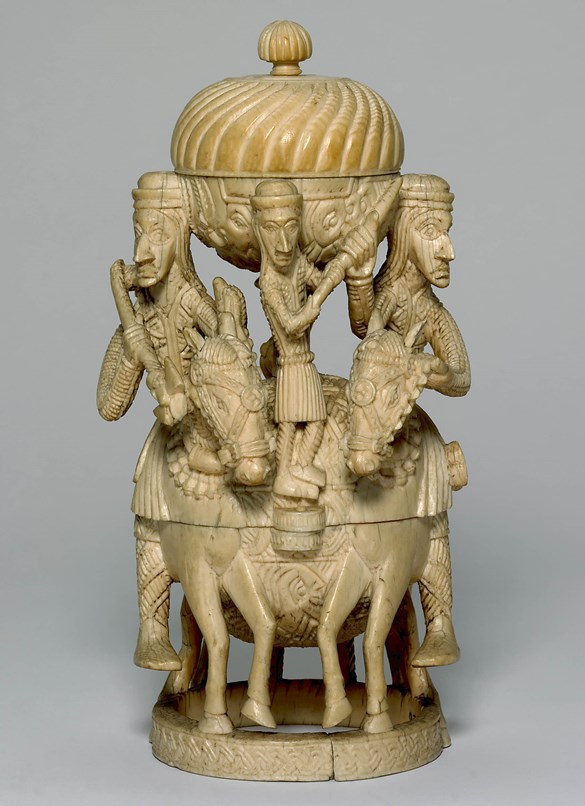 Rotate and zoom into the image below to explore the saltcellar in more details. Click on the hotspots to find out more about how it was crafted.

The original complete saltcellar would have included a lid and base; this is the midsection, featuring four standing male figures.

How did this saltcellar come into the Museum collection? 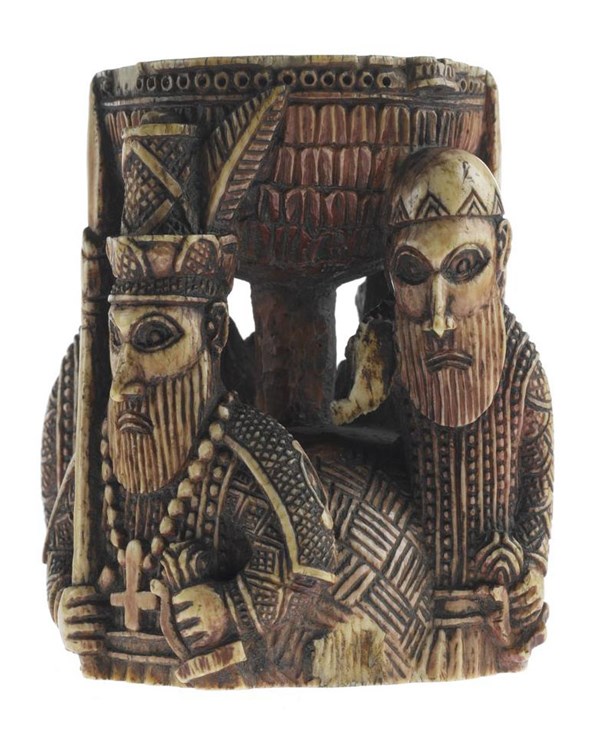 This saltcellar was transferred to the Museum in 1956 from the collections of the National Museum of Antiquaries of Scotland, founded in 1780.

Specialists have identified this saltcellar as the work of an artist known as ‘The Master of the Heraldic Ship’. A complete saltcellar in the British Museum and a two-section saltcellar with missing lid in the Museum of Metropolitan Art give us a sense of how the complete object might have looked. 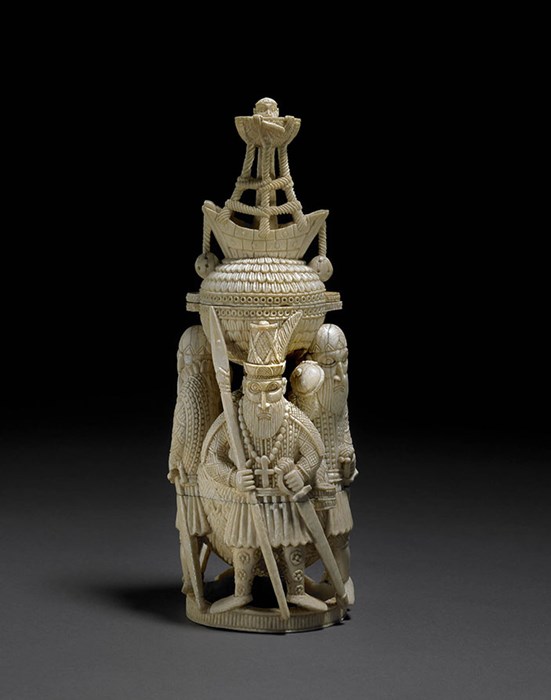 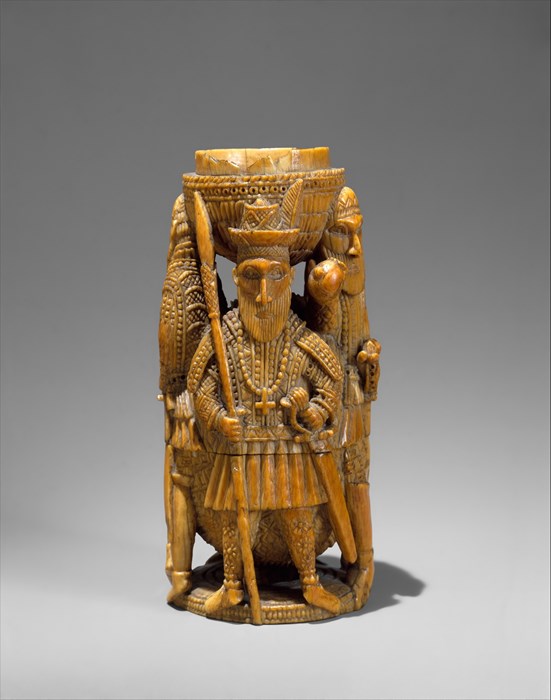 Above: Two-piece saltcellar in the Met collection.

Who are the figures on the saltcellar?

The four standing figures, identifiable as Portuguese by their dress and regalia, bear a striking resemblance to a 16th-century portrait of Afonso de Alburquerque, second Governor of the Indies, Goan, who would have sailed around the African coast. The carver has captured not only the details of his clothing and physiognomy but his demeanour as well. 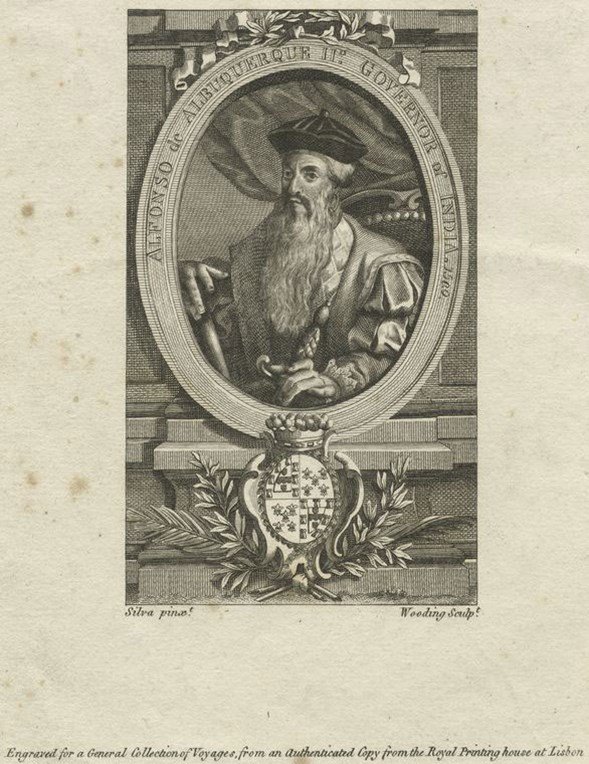 Above: Alfonso de Albuquerque II, governor of India, 1509. From The Miriam and Ira D. Wallach Division of Art, Prints and Photographs: Print Collection at the New York Public Library.

Rotate and zoom into the image below to explore this saltcellar in more detail. Click on the hotspots to find out more about how it was crafted.

See a Benin saltcellar in your home

You can see our Benin saltcellar come to life in the BBC's Civilisations Augmented Reality app. Find out more and download the app here.