Small enough to be held in the palm of the hand

The Japanese characters 'ne' and 'tsuke' mean 'root' and 'to attach'.

What is a netsuke?

A netsuke is a small sculpture which developed as an art form in Japan over a period of more than three hundred years. Netsuke originally served both functional and aesthetic purposes, but in modern times they have become extremely collectable. 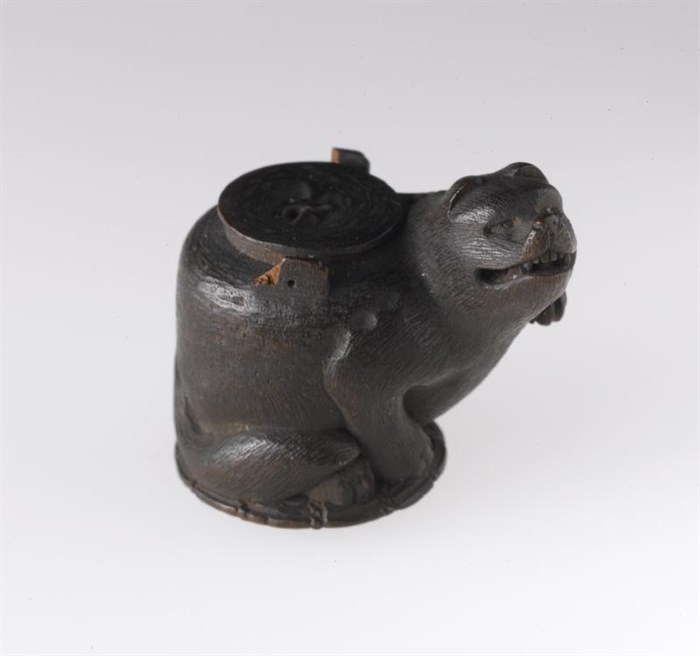 Above: Netsuke in the form of a badger.

What function did netsuke have and how were they worn?

The kimono, the traditional Japanese form of dress, had no pockets. Women would tuck small personal items into their sleeves but men suspended their tobacco pouches, pipes, purses or writing implements on a cord from their sash.

These hanging objects were called sagemono. To stop the cord from slipping through the sash, a small toggle was attached called a netsuke (pronounced net-skey).

A sliding bead (ojime) was strung on the cord between the netsuke and the sagemono to tighten or loosen the arrangement. The entire ensemble was worn at the waist and functioned as a removable hip pocket or wallet. 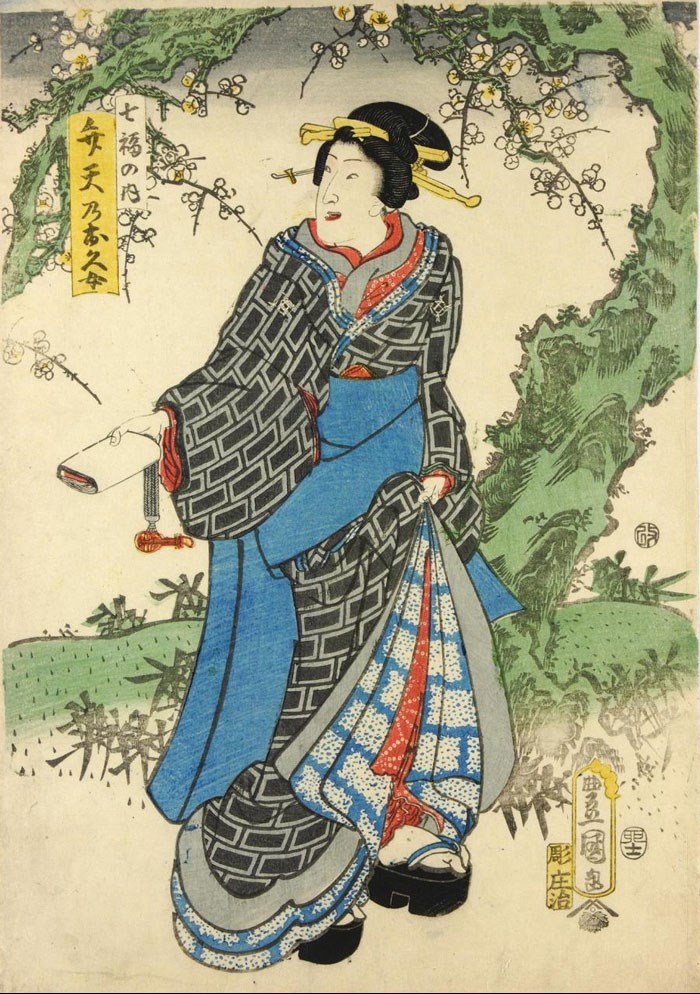 Above: Colour woodblock print entitled Benten no O-hisa jo, from the series Shichifuku no uchi (Seven Gods of Good Fortune), depicting a woman by a plum tree, holding out a pouch from which hangs a netsuke shaped as a lute. By Utagawa Kunisada, 1855.

What were netsuke made of?

All three objects - sagemono, netsuke and ojime - were beautifully decorated with elaborate carving, coats of lacquer, or inlays of various materials such as ivory, wood, precious metals, shell, coral and semi-precious stones. A new group of talented artists emerged during this period to create these fine objects. 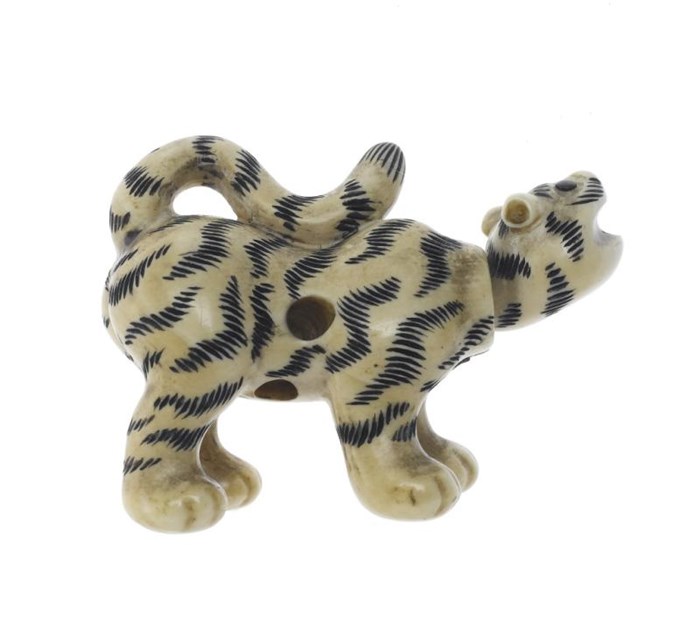 Above: Carved ivory netsuke of a tiger.

What makes netsuke such an exciting art form?

Netsuke allowed the artist to portray an astonishing array of subject matter, including legends, folklore, history, animals, flowers, insects, mythological creatures and more. Styles range from the intensely realistic to the abstract and surreal. 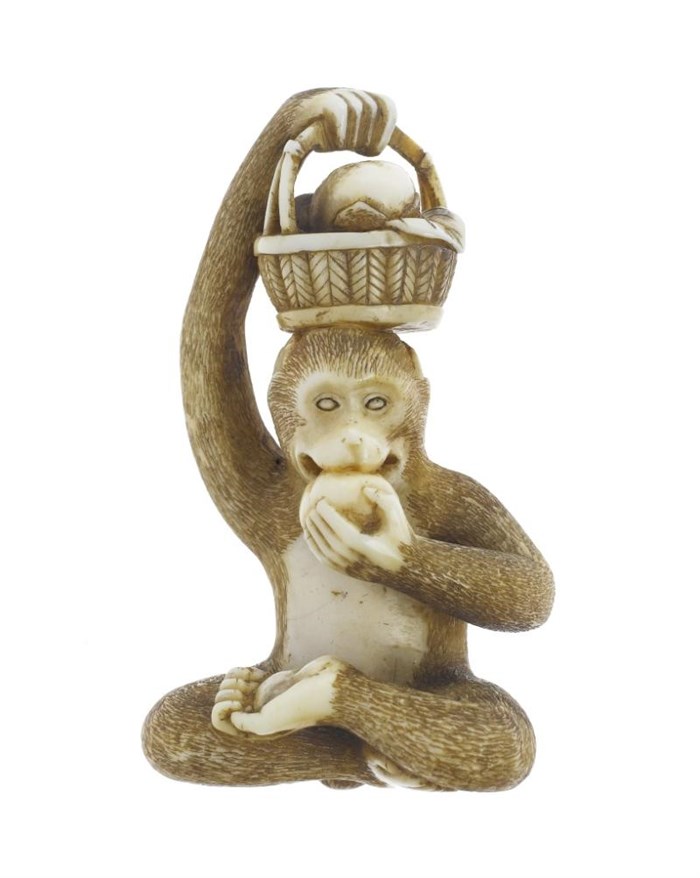 Above: Ivory netsuke in the form of a monkey.

What to consider when making a netsuke?

Because it was a functional object, the creation of a netsuke posed a tremendous challenge to the artist. Designs had to be compact, with no sharp or protruding edges, which would either snag a silk kimono or break off in use. There had to be openings (himotoshi) for the cord to pass through, carefully placed so that the netsuke would hang attractively when worn. The netsuke also had to balance when displayed as a piece of sculpture. They needed to feel good when handled, be carefully finished and be aesthetically pleasing from every angle, including upside-down! 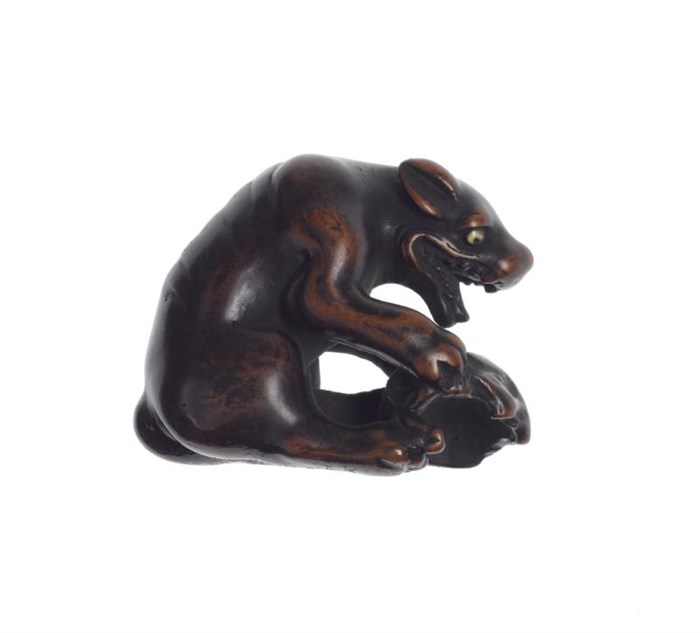 Above: Netsuke in the shape of a wild dog. You can see more netsukes in our online database.