Discover how this stunning, detailed wall hanging was brought back to life by our Textile Conservation team.

Jainism is one of the smallest religions in the world, with around 10 to 12 million followers. However, it has been influential in shaping Buddhism and Hinduism, and has followers around the world. 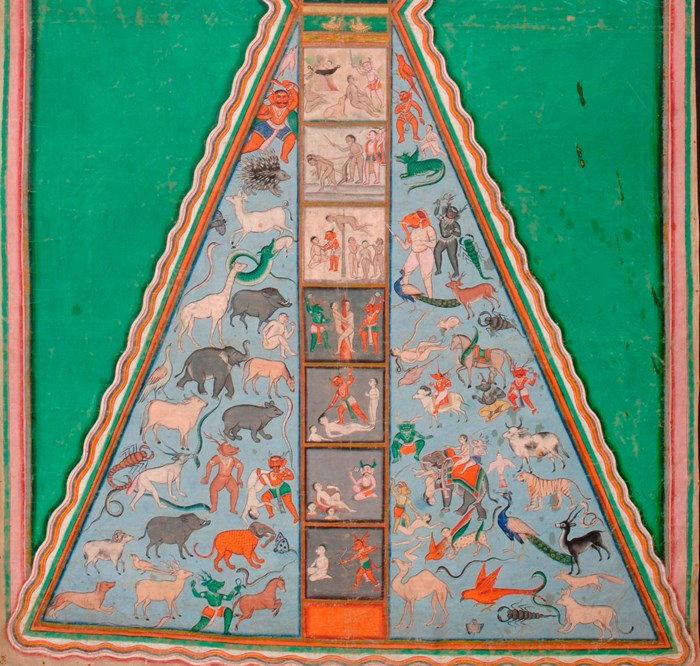 Above: Detail of the lower half of the Jain painting.

This beautiful chitapatra (or picture cloth in Sanskrit) is a 19th century Indian hanging depicting the universe according to Jain belief.

Jainism is an ancient Indian religion with deeply held pacifist beliefs and customs that uphold the equal treatment of humans, animals and plant-life, all of which are believed to contain a living soul.

The Jain universe contains different prearranged dwelling spaces: demi-gods reside at the top of the structure, closely followed by heavenly beings who have attained liberation of the immortal soul and live in a perpetual state of total harmony; then humans, animals, demons and fantastical creatures descend towards the bottom of the picture.

Bringing the painting back to life

Destined for the new Inspired by Nature gallery, the painting was in poor condition when it first appeared in the National Museum Collections Centre for conservation.

It was extremely dirty, with some permanent staining, and there were several sharp creases to the cloth where it had been roughly folded. Of most concern to our conservation team was the very poor condition of the painted surface, which was extremely fragile. The matte paint layer showed signs of being only loosely held onto the cotton, and much of the paint was either actively powdering or crumbling away.

Before any treatment was attempted, tests were carried out on each pigment to ascertain their reactions to water (such as bleeding, swelling or staining). A tiny sample of the brilliant green pigment was also sent to the Analytical Science section for positive identification, as it was thought likely to be a toxic compound containing arsenic commonly known as Scheele’s green.

Copper acetoarsenite, as it did indeed turn out to be, was commonly used in the 19th century in numerous domestic forms, including household paints and dyes. However, it fell out of use when it was realised that the dust the compound emitted could easily be inhaled, causing arsenic poisoning and even death. Therefore, the conservation treatment was carried out wearing a mask, gloves and lab coat, with an extraction fan running at all times. 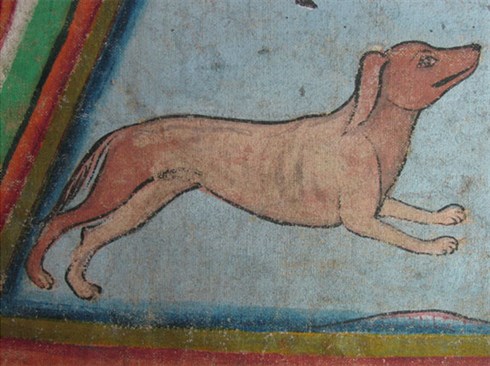 Above: Detail of a dog: the loss of pigment due to powdering paint can be clearly seen.

The tests helped establish that it would be possible to consolidate the paint. This entails applying new binder or regenerating existing binding material within a painted surface to improve the attachment of powdery paint particles to the cloth.

First, a very lightly dampened brush was used to clean the painted surface of dust and dirt. This, in combination with localised humidification carried out through a Gore-tex® membrane, also helped re-activate any remaining binder. Next, a consolidant solution was misted just above the surface using an ultrasonic humidifier, a piece of equipment which converts solutions rapidly into vapour. It was important to the success of the treatment to mist the solution precisely and uniformly, so the solution was pumped at timed intervals through a hose placed in the opening to a small box. 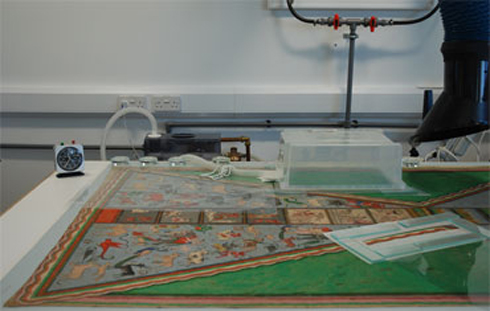 Above: The consolidant solution is pumped onto the cloth through a small box to ensure it is applied evenly.

The consolidating medium used was Funori, a Japanese seaweed which historically has been in use in Japan since the 17th century as a size for textiles and paper. A size is a substance applied in solution to cloth or paper as a preparation for painting or printing; it acts as a kind of filler to smooth and stiffen the surface, making it easier to paint on.

Although not commonly used in textile conservation to date, Funori has two distinct advantages over other conservation grade consolidants in that it dries matte and is known to work extremely well with fine, powdery paints. Scientific studies have also identified other good ageing properties, for example, it does not yellow or shrink over time. 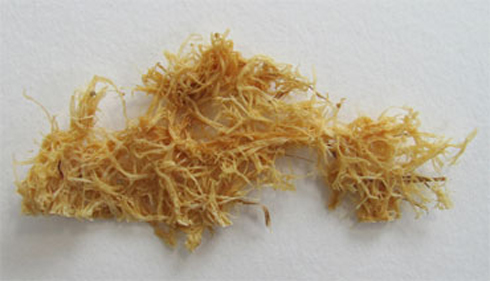 Above: Funori before being converted into an aqueous solution.

After consolidating the powdery paint with the Funori solution, work was still needed in some areas of the hanging to secure individual paint flakes that were crumbling away. This work was carried out using a solution of ethyl hydroxy ethyl cellulose, a consolidant with good flow properties that can be carefully applied with a brush.

The consolidation is now complete, and the hanging is now stable enough for long-term display, the colours shining through as brightly as the original artist intended. However, the final piece of conservation will entail monitoring the hanging at regular intervals to ensure the paint remains as stable in the future as it is now.