Barkcloth is a type of non-woven cloth produced by stripping, soaking and beating lengths of the inner bark from trees such as paper mulberry, ficus and elm. Barkcloth is produced in countries located along a tropical barkcloth belt which includes the Pacific Islands, Japan, Island Southeast Asia, India, East, Central and West Africa, tropical South and Central America and the Caribbean.

Barkcloth is produced by cleaning the stripped bark of its outer layer, boiling or steaming it, then beating it over a log or other hard surface for several hours with heavy beaters made from wood, horn, stone, bone or shell, causing the fibres to soften and stretch. The dried cloth is often decorated, and has a variety uses across the world including for masks, clothing, bedding, mats, tablecloths or souvenirs for tourists.

The changing use of barkcloth within countries located in the barkcloth belt can be attributed to the introduction of cotton fabrics, changing lifestyles and the loss of trees needed for production. Today barkcloth is still produced in some countries in smaller quantities but remains integral to many aspects of life.

Where is barkcloth made?

There were once large centres of barkcloth production in western, central and eastern Africa, including the Congo Basin in the Democratic Republic of Congo, Rwanda, Tanzania, Uganda, Malawi and Zambia. Production was also known in West Africa among the Asante of Ghana, and on the island of Madagascar.

It had a wide range of uses, in particular worn as clothing wrapped around the waist, under the arms or toga style and had a variety of domestic use including screening and bedding. Barkcloth also played an important role in ceremonies for birth, initiation, marriage and funerals.

From the mid-19th into the early 20th century, as imported cotton fabrics became more widely available and as more modest styles of dress were promoted - influenced by the adoption of Muslim and Christian religious practice - barkcloth production and use declined. Among many it began to hold negative associations with the past. Today barkcloth survives among very few communities where it continues to hold special significance and positive links with long held cultural traditions.

In the Ituri rainforest in the Democratic Republic of Congo loincloths of barkcloth from a number of ficus species decorated with intricate painted patterns relating to the natural world around them continue to be produced and worn by the Mbuti for ceremonies and performances associated with community rites of passage. 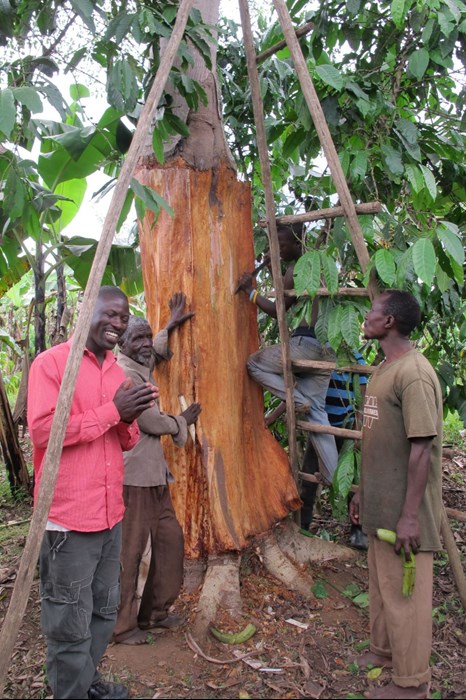 Among the Baganda in the Masaka region of southern Uganda large rectangles of the distinctive undecorated, reddish brown barkcloth from the mutuba tree (ficus natalensis) continues to be a very visible symbol of monarchy and royal heritage.

Indeed, recognition of the significance of barkcloth production in 21st century Bugandan cultural identity was acknowledged in 2005 when UNESCO proclaimed Ugandan barkcloth making a Masterpiece of the Oral and Intangible Cultural Heritage of Humanity. 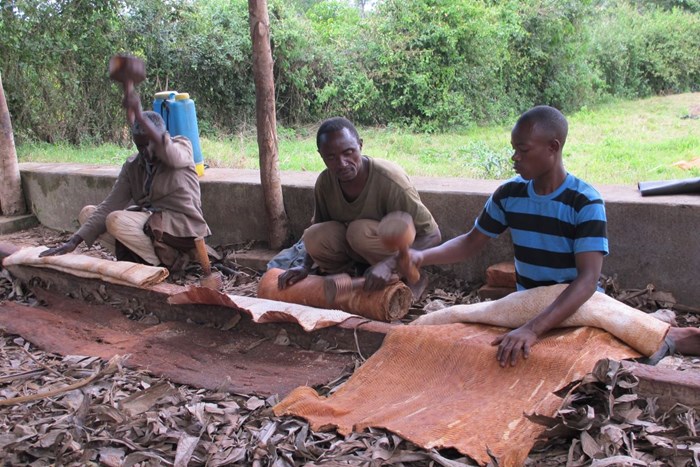 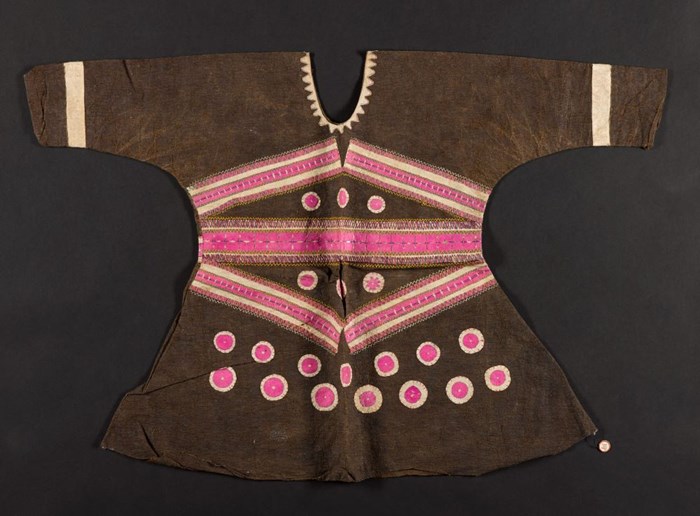 Barkcloth was once produced throughout Southeast Asia and there was great diversity in regional styles. From reddish-brown cloth in the Nicobar Islands to embroidered garments in Laos, various regional styles developed according to local customs and needs.

On the Indonesian island of Sulawesi, barkcloth was commonly used for clothing and domestic items until the end of the nineteenth century. In the highland communities of Central Sulawesi, clothes for special occasions were made from soft, white barkcloth and painted with bold, symbolic designs and bright colours. Intricately patterned sigas (men’s headdresses) and halili (women’s blouses) would have been worn at feasts and important life events. Decorated with geometric motifs and symbols like buffalo horns, four-petalled flowers and suns, the cloths also contained spiritual and ritual importance. 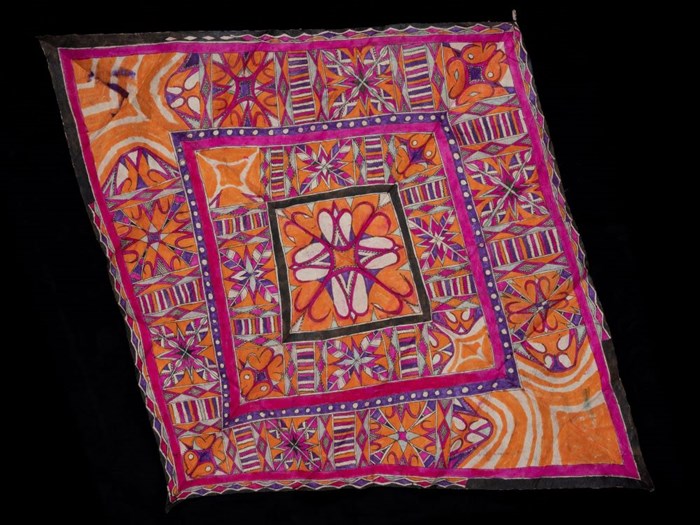 From the early twentieth century, the Dutch colonial government took a more active role in Central Sulawesi and Christian missions were established in the interior. As traditional ways of life and dress were discouraged and imported woven textiles were introduced, barkcloth production and use declined.

Today, the Lore region of Central Sulawesi is one of the last places that still produces and uses barkcloth in Indonesia. Now recognised and appreciated as a distinctive cultural heritage, makers from Central Sulawesi have exhibited their cloth in National museums and private galleries in Jakarta. It has also been used by contemporary artists, featuring in costumes and installations in international exhibitions.

In recent years, the craftsmanship and sustainable quality of barkcloth has been promoted by artisans in Bali, who partner with makers in Sulawesi to produce bags and accessories. Although Indonesian barkcloth is no longer produced and used on the scale it once was, it continues to be valued as a unique regional art form with environmental relevance for the future.

Attush, the term for elm barkcloth, has been made and worn by the Ainu, Indigenous people in northern Japan, Sakhalin, and the Kuril Islands, for centuries. The climate of these regions and the hunting, rather than agricultural, lifestyle of the Ainu are not conducive to producing silk or cotton, which is commonly used in mainland Japan. Ainu clothing is made from barkcloth, animal skin or, from the 19th century, imported cotton.

The Ainu produce attush, an attractive buff or golden fabric, from the inner bark of young mountain elm trees. The elm bast fibre, known as ohyo, is soaked then processed into thin strips which are woven on a backstrap loom. The resulting fabric, mainly used for robes, is lightweight yet durable.

Ainu robes have a similar overall shape to robes, or kimono, worn by wajin (ethnically Japanese) in mainland Japan. However, the sleeves of Ainu robes are tapered, which uses less material and is more practical when carrying out tasks. 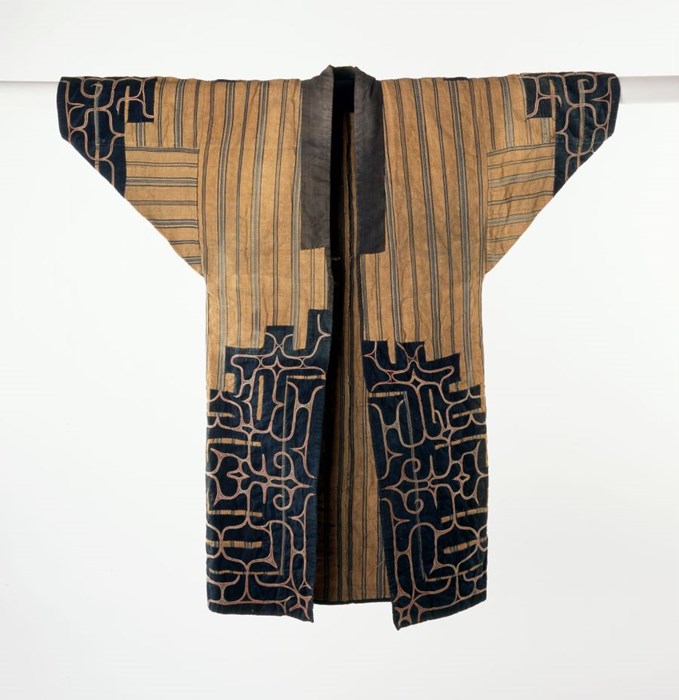 Although the robes are worn by men and women, it is the women who weave the attush as well as make and decorate the robes. Indigo-dyed cotton, acquired through trade, is often appliqued with embroidery to create abstract designs, which are said to variously represent thorns, eyes, stars and possibly animals. These decorative patterns demonstrate the artistic skills and creativity of the maker and are said to please the kamuy (spirits or gods). The patterns are concentrated around the openings (hem, cuffs, and collar) of the garment to provide a protective element from harmful spirits.

Highly decorated attush robes are reserved for ceremonial occasions with simpler ones worn in daily life. However, due to the colonisation and forced assimilation of the Ainu in Hokkaido by mainland Japanese in the 19th century, the wearing of attush and other Ainu robes has dwindled as has the traditional weaving and embroidery skills necessary to make them. 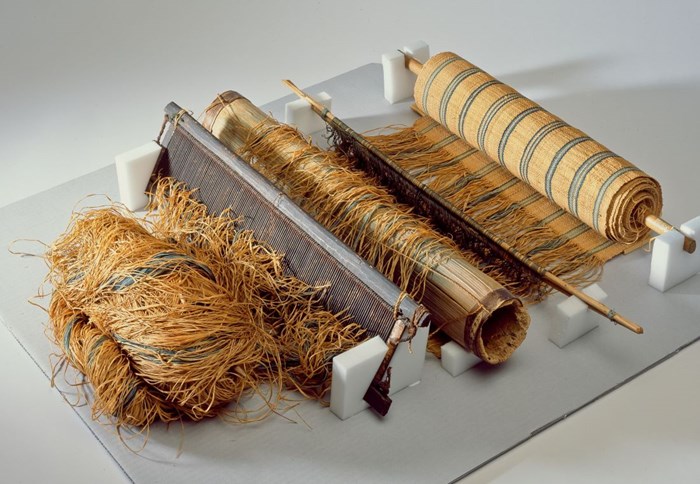 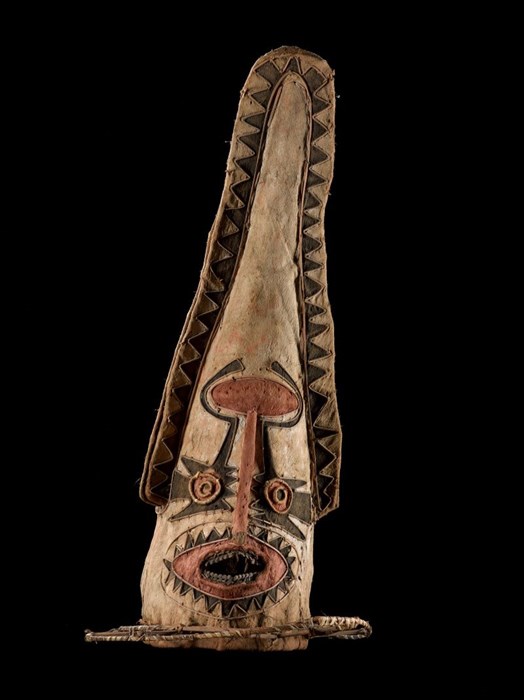 A.1951.372 Ceremonial eharo mask made from a cane structure and covered in barkcloth, Papua New Guinea, Gulf of Papua, 19th century.

Pacific Islanders have been making barkcloth for millennia. Produced in large quantities across the islands of Polynesia and Melanesia, Micronesia is not known to be a barkcloth producing area due to the lack of appropriate trees. Often referred to generically as tapa across the Pacific Islands, many Islands have their own names for the cloth such as Fijian masi, Hawaiian kapa, Samaoan siapo, Niuean hiapo and Tongan ngatu.

The cloths that were created across the Pacific varied in size and intended use. Whilst sheets of barkcloth were made by most barkcloth producing Islands, many Islands also used barkcloth in other ways.

In Papua New Guinea barkcloth was draped over fibre frames to create visually arresting ceremonial masks. In Niue barkcloth was sometimes worn as a tiputa or poncho, and in Tuvalu barkcloth was used for delicately embroidered belts. In western Polynesia huge lengths of barkcloth would have been presented as gifts at major occasions such as weddings. In Fiji barkcloth was even used for printing newspapers onto. Some Pacific barkcloths were highly decorated, whilst others were left plain stained simply but powerfully with turmeric or other natural dyes. 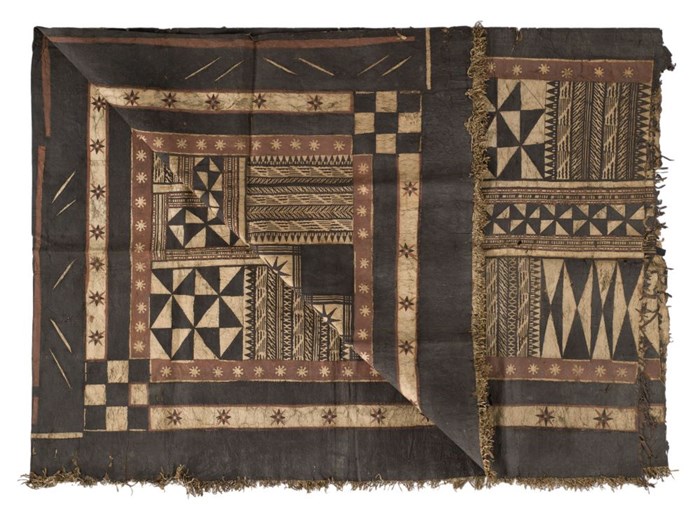 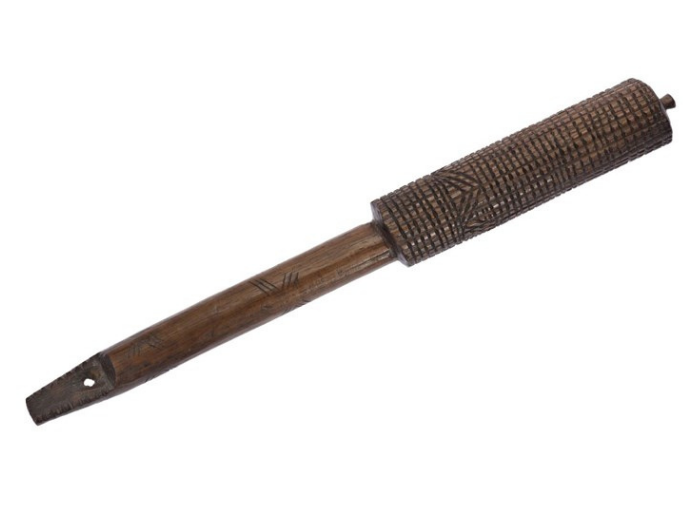 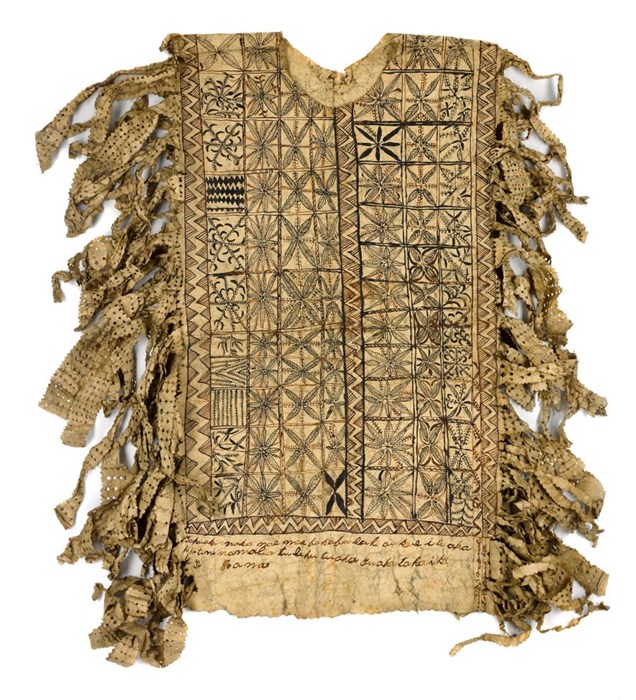 The production and use of barkcloth declined in many Pacific Islands during the 19th century due to the introduction of cotton fabrics by European missionaries, traders, and government officials. Today it is being revived in places such as Hawai’i, and remains strong in the Islands of Papua New Guinea, Tonga, Samoa and Fiji.

The tradition of making barkcloth was introduced to Jamaica in the 17th century by African slaves from Ghana and the Congo taken to labour on sugar and coffee plantations. The practice was modified to suit the natural environment of Jamaica and the resources it provided. Lace bark, as it became known, was made from the bark of the fibrous lagetto tree. Its most common use was for the production of household items and clothing. Unlike other barkcloth, lace bark was made by teasing out the refined fibres of the lagetto bark by hand and drying the fibres in the sun. The end result was a fine cloth which resembled lace or linen, hence its name.

By the end of the nineteenth century as the trees became scarce due to overuse, the production of lace bark rapidly declined. Recently a small grove of lagetto trees was discovered in Jamaica and there is currently a petition to UNESCO to have the area designated as a world heritage site.

In April 2020 National Museums Scotland, in partnership with the University of Glasgow, was due to hold a barkcloth masterclass led by Samoan artists Reggie Meredith Fitiao and Ulisone Fitiao, exploring the art of Samoan siapo.

Due to the Covid-19 pandemic this event was cancelled and instead Reggie and Ulisone created some videos. Watch this short film to discover the process of designing Samoan siapo in American Samoa.

Research on our collections

In spring 2017 the Swiss foundation Kunst und Handwerk awarded a grant to National Museums Scotland for the project ‘The Fabric of Life’. The project suported research into the history of early Polynesian barkcloth in the Museum, shed light on relationships to other collections in the United Kingdom, Europe, America and the Pacific region, and explored the significance of this historical material in the eyes of contemporary artists living and working in Oceania today. 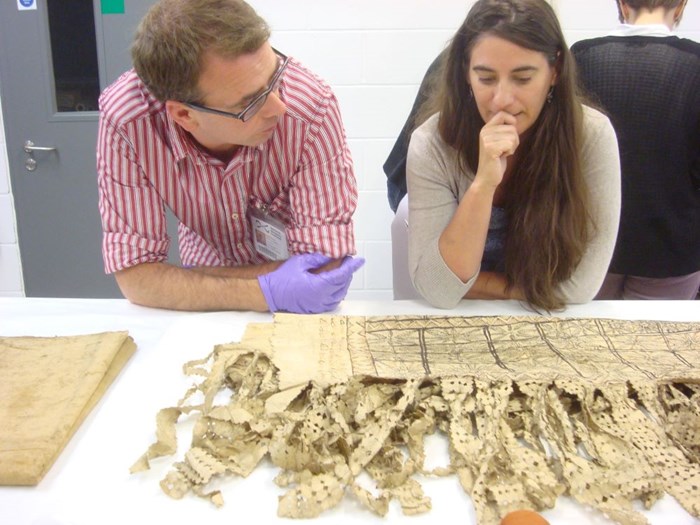 In 2016 the Art Fund’s Jonathan Ruffer Curatorial Grant funded project ‘African Barkcloth: Tradition, Innovation and Change’, investigated the contexts of collection, production and use of the National Museums Scotland African barkcloth collection. The majority of the barkcloth was acquired by the Museum between the late 19th and early 20th century by Scottish travellers, missionaries and colonial officials, who were among the first Europeans to visit East and Central Africa.

The objects they collected form the backbone of National Museums Scotland’s early ethnographic collections and are tied into the complex historical relationships between Scotland and Africa. Research also took into account the collectors to consider contexts of acquisition which provided an opportunity for critical study of African historical material in these relationships. 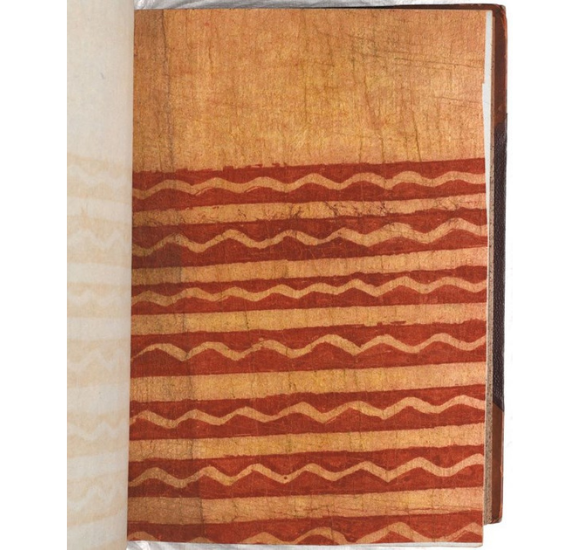 A.UC.822.3 Sample in a volume containing 110 samples of Polynesian barkcloth. Thanks to research we know this was cut from a larger piece of barkcloth also in the collections of National Museums Scotland.

Contemporary collecting is core to the development of the National Collections. Recently curators in the Department of World Cultures have collected contemporary barkcloth that speaks to our historic collections. Objects that reflect shifts in the use and purpose of barkcloth for contemporary Indigenous communities across the world can tell inspiring stories of resilience and reinvention. 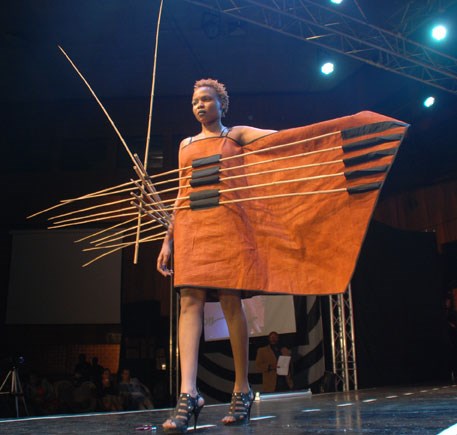 V.2014.73 Art wear by Xenson at the Futuristic Past show, Kampala, 2011, acquired by National Museums Scotland in 2014. Reproduced by kind permission of Xenson Znja. 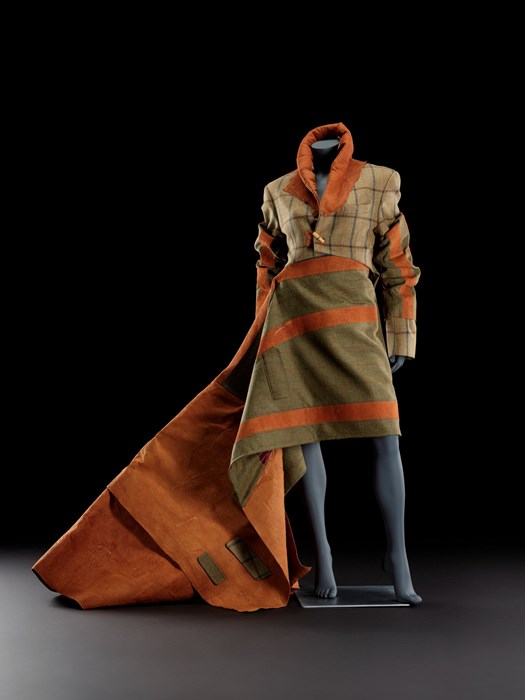